The rap on boxing since the age of the super promoter/manager has been, essentially, the best never fight the best.

I will not get into the broadcast arrangements. That would be far too in the weeds. All that really matters is that usually promoters are exclusively attached to one broadcaster, and it is an exclusive agreement with few exceptions.

Beyond the promoters four major sanctioning bodies: the WBO, WBA, WBC and IBF. They are also to blame for this in large part because they are in the pockets of promoters. This was confirmed, officially, by the raids on IBF offices in 1999 where a federal government probe uncovered that the IBF, one of the four major sanctioning bodies, was taking bribes chiefly from King and Arum to rank their fighters favourably, particularly in divisions where that promoter had the champion.

I note that King’s Florida offices were raided just before the IBF was raided.

Sick sport where two of the seven most powerful entities in the sport in 1999 are getting raided by the federal government. And one of those bodies, the IBF is still around and still incredibly relevant as one of the four major belts.

Whilst it has not been proven, it seems unlikely that the situation has improved much in the 20 interceding years. For instance, in 2015 the WBA ranked Ali Raymi as the number 11 junior flyweight in the world. The rankings were published on June 4, 2015. Raymi died on May 23 of that year due to an airstrike.

They ranked a dead fighter who started his professional career at 41 years old, beating people that nobody who follows boxing even the most forensically would recognise, the 11th best in his division in the world

In the same year, the WBC ranked Floyd Mayweather as the number 1 fighter in the world at 147 and 154 pounds. Mayweather was retired by the time that ranking had come out.

More recently, the WBC President has praised one of the most wanted men in the world and has made up the ‘Franchise Championship’ to for the sole reason of skimming a little bit more money off a fighter’s bottom line after a championship fight.

If you’re keeping count, we have got the WBA, IBF and WBC all caught up in scandals of bribery and incompetence, and truly it is difficult to know where one starts and the other ends.

The WBO is new, only coming to be in 1988 because obviously we needed a fourth one of these leeches. Still, plenty of time for there to be an atrocious scandal.

For now, we just have gross incompetence. Look at Joe Smith Jr, the current WBO light heavyweight champion, despite being destroyed by Dmitry Bivol (the most generous scorecard to Smith Jr was 118-110 i.e. 10 rounds to 2) – the WBA champion who just beat Canelo Alvarez and is clearly the best light heavyweight in boxing.

I have said all of this without yet getting into the travesty of the International, Pacific, Oceania etc. belts. Any time that you see a prefix like that on a belt, it is just a long way of saying that this is not a real belt. The only reason these belts exist is so that the sanctioning bodies can take 3 percent of the fighter’s purse.

They are truly worthless belts. If I have to watch another Gervonta Davis fight where the broadcaster says that he’s defending his fake WBA belt I will vomit.

So, to recap, there are four sanctioning bodies. That’s like having 4 AFLs. Who each have at least two belts per division. Like having two premiers for each of the four AFLs even though the same teams are playing.

That can choose to rank the teams however they like. That’s like having a ladder based solely on vibes and bribes. And then for the privilege of fighting for one of those belts, it costs the team 3% of their payment per belt. The fighter has to pay for the privilege of getting financially demolished.

All fighters should do what Riddick Bowe did in 1992 and thrown the belts in the bin.

It has become so bad that the The Ring Magazine, the most famous and heralded publication in boxing history have essentially concocted their own belt which they award to the fighter whom they view to be the best in the division.

There is only one Ring Magazine belt, there are no sanctioning fees associated with it, and it is just designed to anoint the best fighter in the division. If that man gets beaten, it goes to the man who beat him. Plain and simple.

While promoter/managers are the worst for the fighter’s bottom line, robbing professional boxer’s blind like it is their job. Which it sort of is given the diametric opposition of the role of the promoter, which is to ensure the event makes as much money as possible, and the role of the manager, which is to get as much for the fighter as possible.

I would argue though, that for the sanctity of the sport, the most malignant influence on it is the sanctioning bodies.

And we haven’t even talked about judging.

But this is meant to be a happy column.

I just felt it important to set the scene.

At the moment something is changing.

Prior to very recently, the sanctioning bodies would force their champions to fight usually terrible ‘mandatory’ challengers – think Canelo vs Avni Yildirum in 2021. Yildirum was the WBC’s number 1 contender at 168 pounds and Canelo had to fight him to be able to keep the belt. Prior to fighting Alvarez, Yildirum had not been in the ring since February 2019 when he lost to Anthony Dirrell. 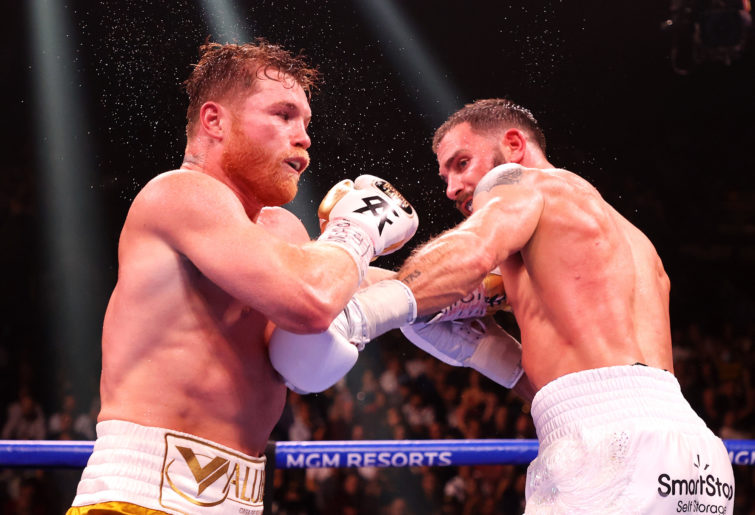 They would mandate whomever the promoter asked them to mandate. This is not just the fault of the sanctioning bodies because, as previously noted, promoters and networks deserve serious blame for this farce as well – look to the protracted negotiations between Crawford and Spence (read: Arum and Haymon) for proof of this.

However, if we look at the landscape today and in the last two years we have had five truly undisputed champions. There have been 7 in the long and dumb history of the 4-belt era.

I would argue that Teofimo Lopez and George Kambosos Jr should also be included in that list because the WBC made up a ‘Franchise Championship for Vasyl Lomachenko, which he promptly lost to Lopez despite originally being conceived as a non-transferrable belt purely so the WBC could extract another set of sanctioning fees.

But whatever, that particular piece of bullshit is not the point.

We now have Jermell Charlo, Canelo and Devin Haney as active undisputed champions in their divisions in boxing in large part because promoters and sanctioning bodies have started to play ball with one another.

This is not true universally, given Josh Taylor was randomly stripped of his WBA strap in May 2022 because he did not want to fight his mandatory, Alberto Puello.

A fight literally nobody is interested in or asked for. All anyone wants to see is either a rematch vs Catterall, who was robbed by poor judging in the first fight, or failing that, a move up to welterwight.

But this is a blip by the WBA who is, in my view, the worst of a bad bunch. Boxing has become more sensible in the last two years.

Not sensible, but more sensible. This will be put to the test after Anthony Joshua and Oleksandr Usyk rematch for three out of the pieces of heavyweight championship of the world.

The fourth resides in Morecombe with Tyson Fury. Despite Fury’s ‘retirement’ – I’ll believe that when pigs are flying – it seems virtually impossible that Fury will not fight the winner of Joshua vs Usyk 2 to give us the first undisputed heavyweight champion since Lennox Lewis (Lewis was stripped of his WBA belt because he took the WBC mandatory instead of the WBA mandatory in 2000. They were mandated at the same time. In 2000 we didn’t have technology for someone to be in two places at once, fighting two people at once. In fact, we still don’t.).

So, with that long background, why is it that boxing has become sensible?

In my view, like everything with boxing and professional sport in general, it comes down to money. Because of the pandemic there was less money around in professional boxing with no live gates and a general downturn with people buying PPVs.

Boxing is also not as organised and dictatorial as the UFC so they struggled to put together big shows, with the exception of work done by Matchroom and Top Rank particularly.

Beyond that, I think that the pandemic actually exacerbated boxing’s slide into a niche sport. There was even less to care about than before because there were no big fights actually worth watching – Lomachenko vs Lopez excepted. With nobody going, and less people buying fights there was just less money to go around.

So finally, with the financial strain starting to be felt, the sanctioning bodies starting forcing big fights. Promoters finally started working together – look at Haney vs Kambosos Jr this weekend in Melbourne.

I attended that fight, and there was Lou DiBella and Bob Arum sitting shoulder to shoulder. Eddie Hearn and Al Haymon have worked together recently on Canelo vs Plant. It still is not perfect with most promoters sticking in their own orbits, but it is getting better. 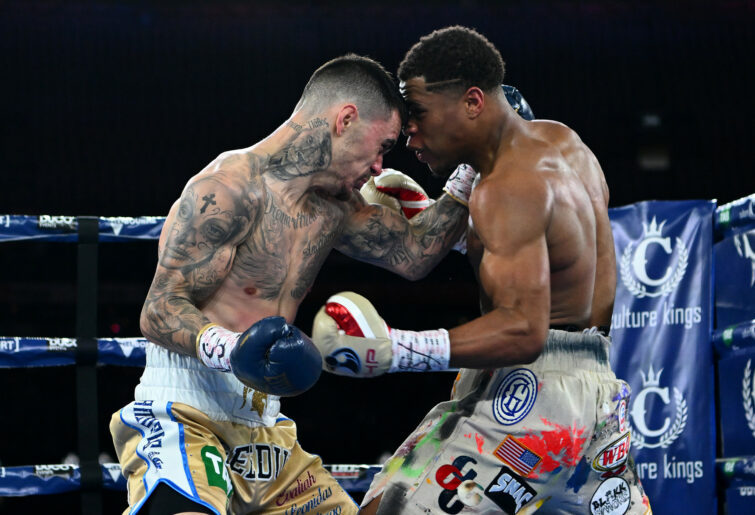 On top of that, fighters appear to have started demanding to be put in big fights. Canelo Alvarez went down the Sugar Ray Leonard route of signing short term deals with broadcasters and promoters so he could piece together the 168 pound championship. Crawford and Spence cracked the sads and it looks like that is coming together, now that Crawford has left Bob Arum and his iron first and tight purse strings.

Boxing is coming together nicely. Finally. It’s happening. I don’t really know why. The above four paragraphs are just my best guess. But I am not complaining. I love this sport but hate everything around it. Maybe it’s finally starting to come around to be all that it can be.