There will be plenty of soul-searching for the NSW Blues after losing another game to Queensland that they started favourites in. Here is how the players rated.

1. James Tedesco: The NSW Captain toiled very hard but was unable to have a decisive impact on the game with ball in hand or in rallying his flagging troops. 6.5/10

2. Brian To’o: DCE and Munster bombed to him all night to limit his kick return metres. He still made 8 tackle breaks and over 200 metres. To’o worked really hard all night but was blunted from being his best. 6/10

3. Kotoni Staggs : Did his shoulder early in the second half, bringing to an end his stuttering debut which featured a few more missed tackles than he would have liked. 4/10

4. Jack Wighton: Clearly the Blues best on the night. Was always dangerous with the ball in hand, scoring a good try, making another line break and running 18 times for 165 metres. Wighton was also brutal in defence, smashing his opponents repeatedly. 8/10

5. Daniel Tupou: Tupou did his best, continually making his trademark dirty runs out of the red zone. He wasn’t able to get his attacking game going and have a big impact. 5.5 /10

6. Jarome Luai: The Panthers 5/8 had a quiet night by his lofty standards and missed a number of tackles too. However, he laid on both the Wighton and Murray tries.  6 /10

7. Nathan Cleary: The worst game Cleary has played for NSW. His control of the Blues attack was quite lacking and his kicking was insipid. Mitchell Pearce was castigated for similar performances. 4.5 /10

8. Payne Haas: The big Bronco worked very hard in defence and was a real handful with ball in hand with great stats. One of the Blues better performers. 7 /10

9. Damien Cook: Cook tried hard all night but with little good effect. He tackled all night, making 56 and missing none. However, his service fell well short of his best – and NSW needed his best. 5.5 /10

10. Junior Paulo: The big unit is such a joy to watch when he’s at his best but this just wasn’t his night. With very few metres from very few runs, his four missed tackles were costly. 4.5 /10 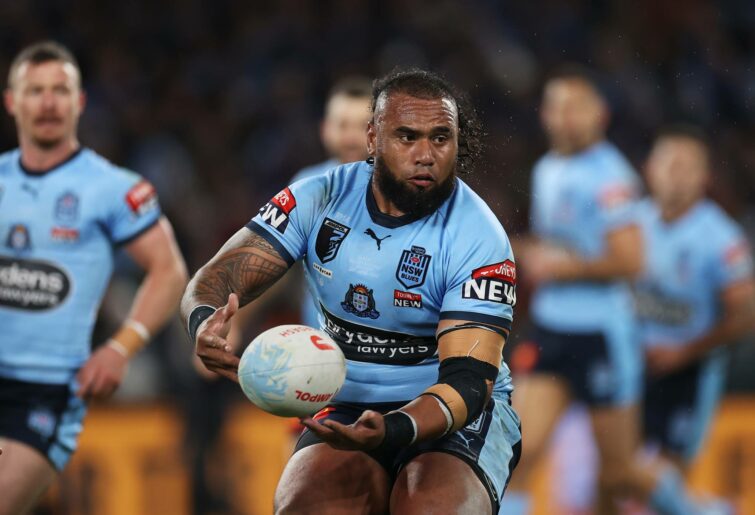 11. Cameron Murray: Started off the bench and tried his guts out as always. However, his impact was not as influential as needed and, even with his late try, it wasn’t his best game. 6/10

12 Tariq Sims: Sims had a go in the first half to limited impact. Barely sighted in the second half and had five missed tackles, a few of which were very costly. I’ll be surprised to see him in game two. 4.5/10

14 Stephen Crichton: Gave away a penalty with his first involvement and lost the ball on the next. Not the debut he wanted at all. 2/10

15 Liam Martin: Some people questioned Martin’s inclusion in the side but he was tireless all night, making 51 tackles and putting his body on the line repeatedly. A strong effort.  6.5/10

16. Reagan Campbell-Gillard: Started the game for Paulo and made over 100 metres but faded out of the game, also missing a number of crucial tackles. 5 /10

17 Ryan Matterson: Didn’t do anything wrong, with decent metres and no missed tackles, but he didn’t stand out at all. 5 /10