The Queensland Reds had it, then they lost it. The New South Wales Waratahs are building into it steadily, game by game. Among the Super Rugby Pacific franchises from Australia, only the Brumbies have been able to show it consistently over both the domestic and crossover portions of the competition.

The intangible “It” is cohesion, the phrase Gain Line Analytics co-founder Ben Darwin uses to describe unity of purpose within a sporting organisation or team. With their long history of success, the Crusaders from New Zealand are often seen as exemplars of that sense of alignment, and their CEO Colin Mansbridge offers one of the more pointed testimonials on the homepage:

“Cohesion might be the most important thing that a Board and Management can learn from Gain Line. Too often organisations respond immediately and thoughtlessly to the stimulus that’s in front of them. That’s the amygdala response and the way that humans acted when the world was eat or be eaten.

Today we have the benefit of enough time to be thoughtful and analytical and we often find that our immediate reaction will give us an inferior outcome to one based on cohesion. Gain Line have taught us to value building things deliberately.”

Nothing tests the substance of cohesion more than a juicy slice of adversity, and that is exactly what the men from Canberra would have been experiencing when Len Ikitau was sent from the field for a high tackle on Aidan Morgan in only the 23rd minute of the game (0:30 on the clip below).

The Brumbies would have been feeling the pressure on their amygdala response at that moment. The world looked like it was crumbling around them, they were already 11 points to 3 down on the scoreboard and were now facing a 20-minute period without one of their Wallaby mainstays. If any of the team vertebrae are even slightly out of alignment when that happens, the whole backbone will splinter and fall apart, rather than fusing together.

Cohesion on the field starts with a gameplan robust enough to withstand the unexpected. As I have indicated in previous articles like this one, the Brumbies main focus falls on defence, the contact area and the kicking game.

I unwrapped the keys stats there as follows:

“The Brumbies beat the Chiefs despite ‘losing’ the territory and possession stats (39% and 44% respectively), kicking more (33 kicks to the Chiefs’ 20), building less than half the number of rucks, and making 191 tackles to only 100 by their opponents.”

Roll on to Saturday evening’s game against the Hurricanes, and hardly anything had changed: they were still holding the shorter end of the stick in terms of possession (47%), they kicked ten times more than their opponents (32 kicks to 22), set 61 rucks compared to 107 by the Canes and made 148 tackles to 114.

They still have the lowest active time of possession, build the fewest rucks and make the fewest carries of any team in Super Rugby Pacific, but the Brumbies do not care. If you were to put those stats to their head coach Dan McKellar, he would probably just shrug his shoulders with a wry grin. The figures are not the Key Performance Indicators around which his team builds its confidence, structure, and wait for it – its cohesion.

McKellar might fire back, quoting the Brumbies’ defensive excellence and their attacking economy. They share the best defensive record in the competition with the Crusaders, and they have scored two thirds of their 55 tries from lineout, with a class-leading 29 scores coming within only four phases. Against the Canes, the Brumbies scored four tries without registering a single ‘official’ line-break in the game. Nice work, if you can get it.

These are foundations that have been ‘built deliberately’, to recycle the words used by Colin Mansbridge.

“We spoke about the importance of our finishers coming off the bench and we saw that tonight. Great for us moving forward to next week.”

“It was unreal,” Tom Banks added. “To overcome a red card and grind it out… it was our focus all week.

“We knew it wouldn’t come early. We just had to stay with it, and in the end, we came away with it.”

Near the top of the Brumbies’ shopping list in the first aspect would have been ‘Stop Ardie Savea’. Ardie is the Hurricanes’ pre-eminent forward ball-carrier and renowned as the top gainer of post-contact yardage in New Zealand rugby. Ardie may get hit, but he very rarely stays hit without dragging a defender or two over the ad-line with him.

The Brumbies had to make sure that they nailed him to the spot after first contact was made in the tackle:

Both Savea brothers have been used to potent effect on the pick and go by the ‘Canes this season, but Allan Alaalatoa not only wrestles the Kiwi icon back in contact, he draws two more men in yellow to commit to the ruck while forcing a knock on by wing Salesi Rayasi, which went unnoticed by referee Paul Williams.

If Lord Laurie Fisher enjoyed that second effort by his captain, he would have been hugging himself in glee at the second hit by the impressive Tom Hooper. Ardie is knocked back in contact on a carry from the Hurricanes goal-line, which means a short exit kick off 10, which in turn results in a Brumbies lineout in the red zone. The game is returned quickly to the home side’s greatest point of strength.

That is how you connect the dots within your overall tactical pattern. The Brumbies used their kicking game to create pressure on the opposition breakdown – in the first half, by dropping short attacking kicks into the soft zone between the front line of defence and the backfield:

In the first example, the Fisher formula asks for a second and a third man to commit automatically to the first ruck after the chase, and that pushes Salesi Rayasi all the way back to his own goal-line for the exit; in the second instance there is a turnover at the ruck by open-side Luke Reimer.

The Brumbies directed most of their contestable salvoes in the direction of Rayasi, who has the most running metres of anyone in Super Rugby Pacific. The moral of the story: make the most dangerous attacker spend more of his time ‘sweeping the sheds’ on dull defensive duty:

First Rayasi is turned over in contact by replacement hooker Lachlan Lonergan, then number 21 Jahrome Brown penetrates into the space beyond the receiver on the other wing (Julian Savea), knowing that the Hurricanes have four backs among the top 20 off-loaders in the competition. They knew the ball would be played out of the tackle by those big Kiwi backs, and so it was.

The Brumbies also connected the tactical dots the other way around, with pressure at the tackle area creating a succession of negative exit plays by their opponents, which led mostly to prime attacking lineout positions, or occasionally, promising kick returns: 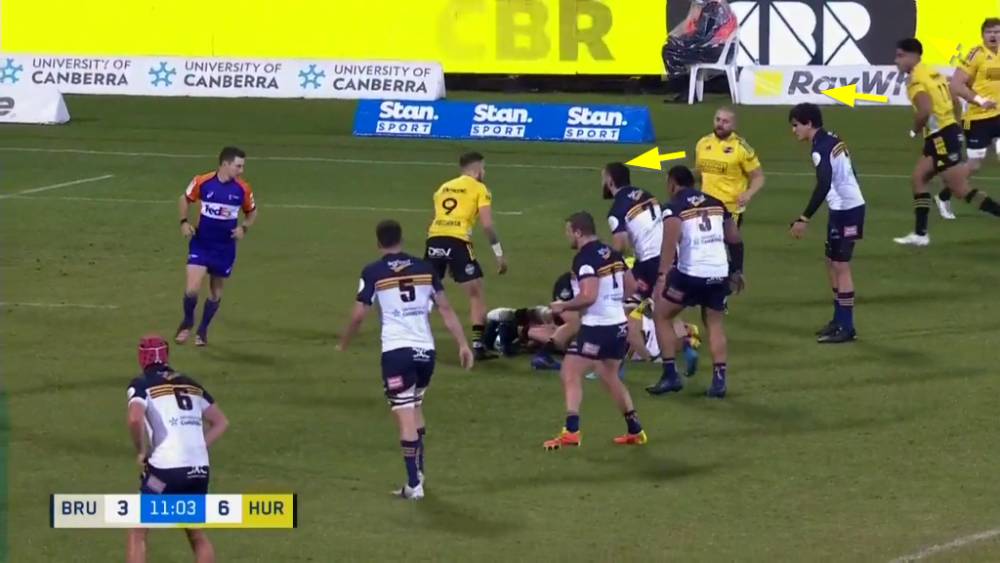 Again the Ponies pick on poor Rayasi, hitting the tackle with the second, then the third man like machine-gun fire. T.J. Perenara has to retreat and there is no time to set up a box-kick chase to his left. The ball has to go back to the goal-line once more, and the weaker left peg of Jordie Barrett, with Nic White running at his favoured right side:

In one final example, the Brumbies shot Rayasi down with a second and third man at the tackle after a high kick from White, forcing the turnover. That set up another kick ahead by the moustachioed Generalissimo:

What’s the result? All together now: the Hurricanes sent tumbling back to their own goal-line, with a short exit kick and another attacking lineout deep in the opposition 22 to the Brumbies!

Dan McKellar and his charges don’t care whether you like the fact that they kick, maul and defend a lot of the time, and are probably happier without the ball than they are with it. Unlike their keenest domestic rivals, the Queensland Reds, they will gladly pay that price for total clarity and unity of purpose in the way they go about beating teams from New Zealand.

It didn’t matter that their Wallaby centre Len Ikitau was red-carded with an hour of the match still to play. They simply redoubled their efforts at the tackle area, forced short exits from the Hurricanes with their kicking game, and attacked from lineout in favourable field positions.

The men from Canberra have that priceless commodity – cohesion – and they allow nobody to interfere with their vision of how the game can be played. They have built their foundations deliberately over a number of years and those structures have proven value.

They made no line breaks in the game at all, but scored four tries from only 14 phases launched from their favourite set-piece. One try every three and a half phases represents true attacking economy. That is the way you win knockout games.

It may not work in the semi-final against the Blues, but it hardly matters, because the Brumbies have already proved their point. In the Trans-Tasman ‘eat or be eaten’ jungle, they have found a response measured and thoughtful enough to have won the Lion’s share of their games against New Zealand opposition, come what may next up at Eden Park this Saturday night.