The Brumbies’ chances of overcoming the rampant Blues in the Super Rugby Pacific semifinals have received a setback with Test centre Len Ikitau banned for his red card last week.

The club opted to fight the card at SANZAAR’s Judicial Committee on Tuesday night but the decision to uphold a ban was not communicated until after 4pm on Wednesday.

Ikitau was sent off for a high hit on Hurricanes flyhalf Aidan Morgan during the Brumbies’ 35-25 victory on Saturday.

Ikitau is banned for three weeks, but only two games because he has chosen to undertake coaching intervention.

That means he will be available for the Wallabies opening match against England on July 2. He is allowed to make up his banned game in club rugby with Tuggeranong. 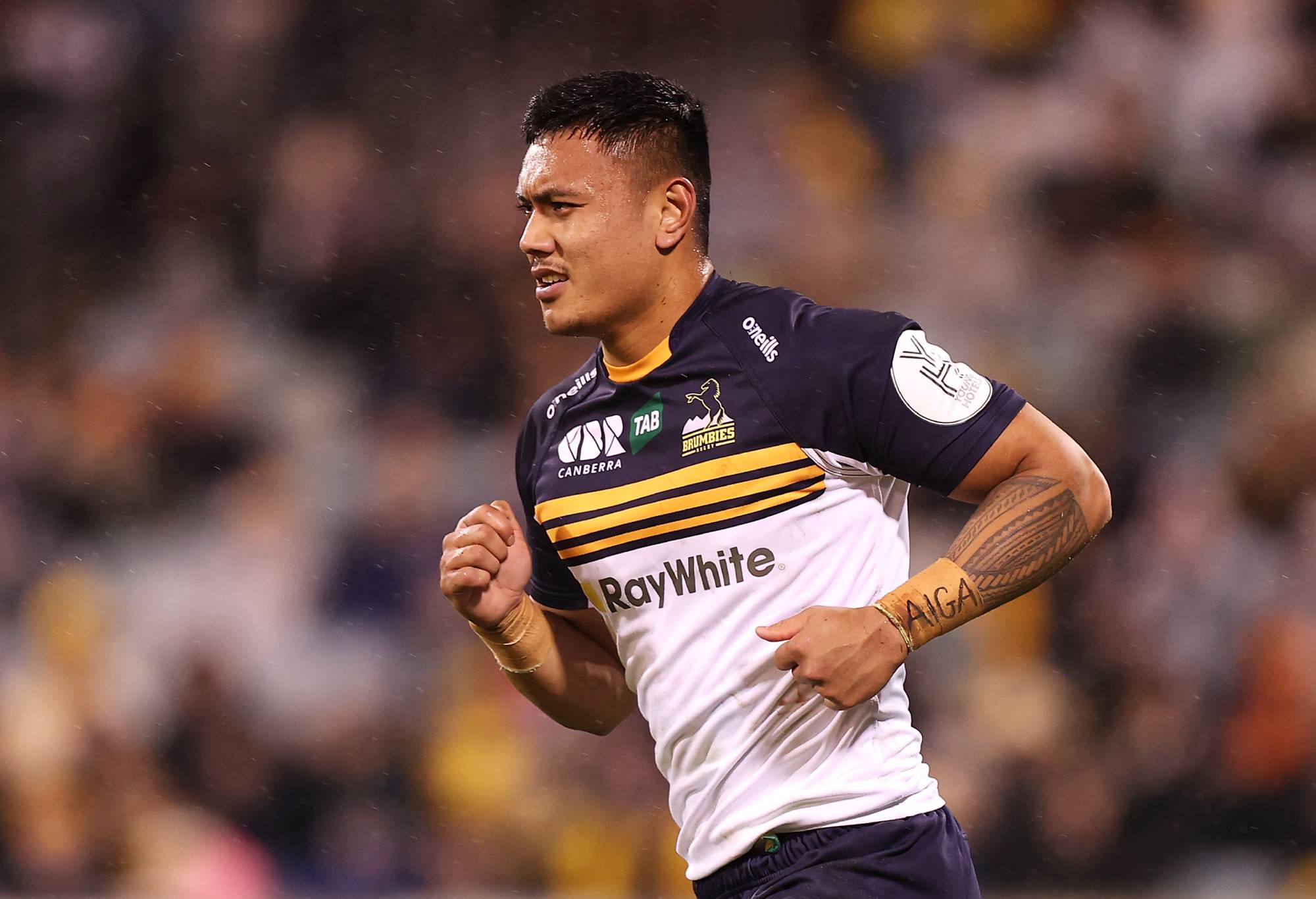 Len Ikitau of the Brumbies looks dejected as he leaves the field after being given a red card during the Super Rugby Pacific Quarter Final match between the ACT Brumbies and the Hurricanes at GIO Stadium on June 04, 2022 in Canberra, Australia. (Photo by Mark Kolbe/Getty Images)

“It’s the way game is headed with high contact,” McKellar said. “We thought there were mitigating factors, the judicial panel didn’t, so unfortunately he misses out the remainder of our season.

“He’s shattered. really disappointed. He’s never had a yellow card in his career so to get a red card and be ruled out of the two biggest games of the year is difficult for him to take.

“He understands his role now is to help Ollie and the backs defensively as he always does.”

McKellar said Ikitau was “outstanding delivering his thoughts on the incident.

“We’ll let him sleep on it, give him some room and he knows he’s got to park that now and move on with what’s important next and that’s helping us prepare to win a semi and grand final. In a few weeks time it will all be forgotten about and he’ll move on to being available for the Wallabies.”

In more encouraging news for the Brumbies, Rob Valetini returns from injury at No.8 in what, Ikitau apart, is a full strength lineup.

Paul Cully joins Brett McKay and Harry Jones to look ahead at the semi finals in the latest edition of The Roar Rugby Podcast.

“The player is therefore suspended for 3 weeks. The Judicial Committee has sought more feedback from the Player regarding his potential playing schedule and reserves the right to adjust the date of the sanction upon receipt of the information.”

The Blues named their team on Thursday with three starting changes.

The Blues have four locks in their 23 due to the absences of loose forwards Dalton Papalii and Anton Segner.

Assistant coach Tom Coventry had plenty of praise for the Australian club after they took to Blues to the wire in Canberra last month.

The Brumbies found joy at the breakdown, successfully slowing down the Blues’ ruck speed, while setting the Kiwis on the back foot through use of their rolling maul weapon.

“They were up for it,” Coventry told reporters.

“They were playing as close to the law as they could to keep themselves in the game. Physicality at the breakdown is what most teams crave and they were after that. They played on the edge, and they got penalised for it. This week I’m sure they would’ve talked about their discipline and I’m sure they’ll be better there.

“We had three guys held up over the line so we were responsible for not finishing off as well. We’ll start from scratch again.

“They were bloody good last time we played them. It came down to a drop goal and they had the upper edge on us at times. I know they’re pretty confident with the way they played against us so it’s a big challenge for us.

“We respect them deeply. They’re a great side and they’ve been the benchmark for Australian sides for a while now. We’re going to have to be at our very best. We weren’t last time.”