In this column, I want to focus solely on Ali the fighter. This narrow focus massively undersells the importance of Ali, a transformational figure in the back half of one of the most transformational centuries in American and global history.

However, focusing just on his fighting career allows us to examine how he built the platform that he used so effectively during his career and allows us to understand how the world first came to know him.

This column will not focus on Ali’s truly iconic victories.

In my view his iconic victories are:
• Henry Cooper 1: Ali’s first time getting knocked down. It was also the first instance of legendary trainer Angelo Dundee’s shenanigans, when he cut a seam in Ali’s (then Clay’s) gloves to give the champion some more time to recover after the knockdown.
• Sonny Liston 1: “I shook up the world”.
• Sonny Liston 2: Phantom punch.
• Floyd Patterson: First fight after he joined the Nation of Islam.
• Cleveland Williams: The best fight anyone has ever fought, in my view.
• Ernie Terrell: First time we saw Ali’s mean streak. He had Terrell beaten and knocked out inside 2 rounds but dragged out the punishment, yelling at Terrell “SAY MY NAME” as he rained down right hands, only stopping when he could tell that Terrell was about to get knocked down. In the leadup to the fight, Terrell refused to call Ali by his name, instead referring to him as “Cassius Clay”.
• Ken Norton 2: An extraordinary victory after having been beaten by Norton 6 months earlier and having his jaw broken in the second round of that first fight and getting through all 15 rounds.
• Joe Frazier 2: The worst of the 3 Frazier fights but this meant that he had avenged both of his losses up to this point.
• George Foreman: His greatest ever victory in my opinion. The Rumble in the Jungle.
• Joe Frazier 3: The Thrilla in Manila. One of the most brutal fights that I have ever seen. Ali said that he had never been closer to death after this bout. A pyrrhic victory if ever there was one.

Not included in the lengthy list just given is Ali’s fight with Zora Folley. 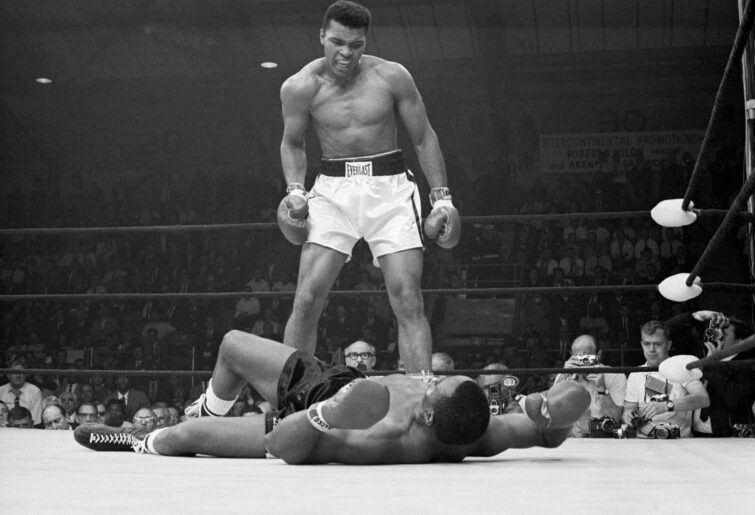 This was the last Muhammad Ali fight before his exile from the sport, and it is when he really put it all together as the younger version of himself as a fighter. It is not an iconic victory but I think it is a significant performance as a means of extrapolating what he might have been as a fighter.

There are two Muhammad Alis in the ring. The first Muhammad Ali was the one who came into the sport a skinny, brash kid named Clay from Louisville Kentucky. He moved like ballerina, constantly on the balls of his feet and up on his toes.

His hands were down at all times and he defended by dancing and moving his head in a way that meant he was virtually impossible to hit. He fought like no other heavyweight ever has or ever will, seldom sitting down on his punches and focusing on blistering speed as opposed to raw power.

In that first Liston fight, at no point is he stationary. He is just dancing and moving and frustrating Liston constantly.

As he got a little older and his body matured, he was able to build in some power when it came time to finish off opponents. A good example of this is in the Williams and especially the Terrell fights.

After his three-and-a-half-year exile, the fact is that he was not the same fighter. In the Folley fight, Ali was a ripped and sinewy 211 pounds. In the third Frazier fight in Manila, Ali was a thicker and stockier 224.5 pounds.

This weight gain can be attributed to a few things but chief among them was that during that 3.5-year exile he simply was not training. He figured his boxing career was over and he was making a living doing speaking tours at universities, work that became more regular as average Americans turned harder against the war in Vietnam.

He lost some speed in that exile and some fitness that he never got back. As a result, he was more flat-footed, using the clinch more effectively than any heavyweight ever.

This flat footedness also led to far more power in his shots, and he became something of a knockout artist, but never at the expense of hand speed. At this point his savvy and toughness also began to show themselves, inventing the technique of stealing rounds at the end by flurrying at the sound of the 10 second bell and using the ropes effectively to absorb punches.

The Folley fight in my view is kind of a mix of both of these versions of Ali and is one of my three favourite Ali fights alongside the Williams fight and of course the iconic George Foreman fight.

The background to the Folley fight is fascinating. Ali knew that this would likely be his last fight before being suspended because he was issued a military summons just before it. At this point Ali was just a dirty draft dodger to the American public and the crowd was against him from the jump, even if very few gave Folley any chance against Ali.

In terms of Ali’s body composition for the Folley fight, he was ripped, and his biceps were bulging. It is a stark contrast from the skinny kid that beat Sonny Liston the first time purely by dancing and moving. As a result, he has that little bit more pop in his punches, but he still has his extraordinary movement skills.

He was also at his most watchable at this point in his career. Like I said he had started to incorporate some power into his arsenal, and he still had the speed. His three-fight run of Williams, Terrell and Folley was Ali at his most aesthetically pleasing. Aggressive and beautiful in every movement.

In the fight itself, we saw the best of this version of Ali.

In the first round he barely threw a punch. Dancing and moving and waiting to see what Folley would try to do to beat Ali. Ali is in total control of everything that is happening in the ring but Folley was game, following him around to all corners of the ring.

Watching the fight is like watching Shelley Duvall share the screen with Jack Nicholson in The Shining – levels apart.

In the second round Ali is still dancing and moving but is throwing in an occasional flurry just to keep Folley honest. Ali was also doing something he did so effectively. He was swimming without getting wet. He would get right into the pocket of Folley and smother his hands before Folley could react, flurry briefly while still on his toes and bound on out of there.

By this point Ali’s jab is finding a home on Folley’s forehead and it is becoming clear which punch is going to control the fight. Ali recognised in the first round that Folley felt that he could not hit Ali’s head so he jabbed continuously to the body.

The body can’t move in the same way the head can. However, in order to land that jab to the body, any fighter needs to take a big step in, making it an extremely risky punch. Ali made him pay for taking that risk, landing his right hand over the top of that jab to the body time and again in the second round.

In round 3 Ali starts to show his evolution. He comes out flat footed, looking to bang with Folley knowing that he is longer, faster and has better reflexes. At this point we really see the difference in hand speed. All of a sudden, Folley hits the canvas off of a great counter right hand, left hook combination by Ali. The speed is blinding.

Ali is now back up on his toes, bounding in an out of Folley’s range and applying both simulated and real pressure and throwing the occasional 10 punch combination that no heavyweight before or since has ever been able to throw so fluidly. He gets caught a little more in this round but the champion is so good at riding punches that nothing really affects him.

In round 4, Ali once again comes out flat-footed. It is clear that he has had enough and it’s time to put Folley out of his misery. Ali again comes out and standing right in front of Folley, continuing to land that right hand over the top of the jab to the body with impunity. It’s that right hand that catches Folley again and it’s a perfect one punch shot. Folley knocked out.

Fight over. Boos ring out. The draft dodger wins again.

We as a fight-watching public were robbed of more of this Muhammad Ali. As I said he was not the same figher when he came back. Bigger, more flat-footed, more power-based.

However, in my opinion this Folley fight was a window into what we would have got from Ali had he never been banned. He would have blended power, speed and defence in a way that very few have ever done in the history of boxing and done it with majesty. Watching him fight this fight is like watching a great composer, in total control of everything in every moment.

Truly, he was the greatest heavyweight that has ever lived.

All you need to know about Usyk - Joshua 2, when it starts, where to watch and who is going to win

There was a time when a fight like the one that is happening on this weekend would have stopped the world. Largely because of…