Crowned by a six, which landed in a spectator’s pint glass, Daryl Mitchell’s unbeaten 81 helped New Zealand to 4-318 on the opening day of the second Test against England.

Mitchell put on an unbroken stand of 149 with Tom Blundell (67) to blunt England’s attack at Trent Bridge on Friday, just as the hosts looked to be getting on top after putting New Zealand into bat.

While Blundell led a charmed life – he was dropped twice by Joe Root at first slip – Mitchell was virtually impenetrable as he built on his century scored in a lost cause in the first Test at Lord’s last week.

The highlight of a 147-ball knock that featured nine fours and two sixes was the mighty blow he delivered off spinner Jack Leach, which flew over the ropes and landed with a splash in a female spectator’s beer glass.

It drew cheers from the crowd but England’s players weren’t smiling. 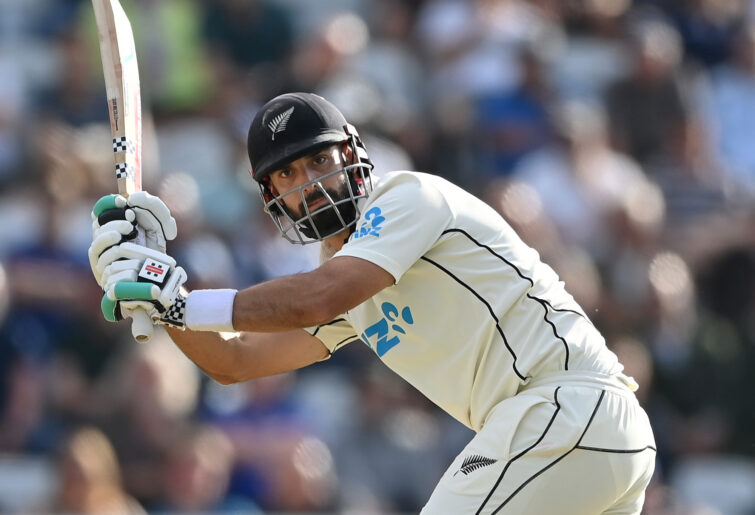 Henry Nicholls (30) and Devon Conway (46) departed in the space of three overs midway through the second session to catches behind off Ben Stokes and Jimmy Anderson, respectively.

The same bowlers had removed openers Tom Latham – the stand-in captain – and Will Young off successive balls after New Zealand’s reached 84 without loss.

Young (47) edged Stokes to Zak Crawley at second slip and Anderson enticed a mis-hit pull shot from Latham that sailed into the hands of Matthew Potts at midwicket for 26.

Nicholls and Conway added 77 before Nicholls – dropped on 16 by Crawley in the slips – edged Stokes to wicketkeeper Ben Foakes.

Foakes had another simple catch to remove Conway following an inside edge off Anderson, but Root’s catching left much to be desired.

Blundell should have departed for a duck, only for Root to put down a catch at first slip off Stokes. Blundell was on 47 when he swiped at Leach and Root put down a much tougher chance as he dived to his right.

With about 20 minutes left in the day, Stuart Broad – having no luck on his home ground in Nottingham – roared in anger after Blundell sent an edge between Crawley at second slip and Jonny Bairstow at third slip.

“We would have taken that (at the start of the day),” Conway said of New Zealand’s total.

“We were quite keen to bowl first but after losing the toss, putting on 300 was quite a good effort.

“The pitch didn’t do heaps. It was quite a nice surface. It played a lot better than it looked.”

Blundell will look to reach three figures after getting out for 96 in the second innings at Lord’s, where England won by five wickets.

The New Zealanders lost Kane Williamson, their captain, after he tested positive for coronavirus late Thursday and was forced to isolate.