A supreme defensive, high-pressure-at-the-coalface and skilful-in-the-wet performance by the Super Rugby Pacific table-topping Blues has seen them run out deserved 20-19 victors over a gallant Brumbies at Eden Park.

In rainy conditions, the Blues were better tactically, physically, and mentally. They pressured the Brumbies in all facets, particularly at scrum and ruck.

The Brumbies had gone into the match believing these were strengths. Not at Eden Park on Saturday night. Not for the most part, anyway.

Yet such was the momentum shifts of the match – the Blues twice had men in the sin-bin – the Brumbies still had a chance to snatch it at the death. Yet with 90 seconds to play, Noah Lolesio’s attempted field goal was charged down by giant front-rower Ofa Tu’ungafasi, and the home team had a famous victory.

“You want to do what the opposition wants least,” Stan Sport analyst Michael Cheika observed of Lolesio’s field goal attempt at the end.

“They needed to edge closer, edge closer, build pressure. If you could’ve asked the Blues what they wanted least, it was a shot at field goal.”

Fellow analyst Tim Horan was okay with the shot – but wanted a few more phases; while Allana Ferguson said the shot was “another example of the Brumbies’ decision making letting them down”.

Two minutes in, and an upset appeared on the cards: Irae Simone shredded the Blues’ line with a simple run, where he performed the crafty move of running straight at fullback Stephen Perofeta, up in the line.

A dipped hip later, and boom, Simone was through before he turned on the gas and burned Beauden Barrett, defending at 15.

The Blues’ counter-rucking was fierce and occasionally illegal, and the Brumbies took advantage. They came hard from quality lineout ball. They sent Tom Banks to the corner and went to their power-play: the driving maul from the lineout.

It didn’t pay off. And the Blues took plenty from it. Particularly when Tom Hooper kept playing with what looked a self-diagnosed dislocated shoulder. Then he knocked on the drop-out, and Luke Reimer replaced him.

If you wanted a momentum shift, that was it.

The Blues came hard. Nic White took a mark and then a head-knock from Banks. Perofeta nailed another penalty goal. Then again, another charge from the Blues – multiple runners, passes, forwards and backs interchanging, they went 70 metres before Hoskins Sotutu crashed over from the first ruck in the play. The Barbarians would’ve been happy with it.

The Brumbies kept fighting, but the mistakes were creeping in: Banks did his thing to the left off a penalty, while Folau Fainga’a immediately knew the error of his ways after a crooked lineout.

Through it all, momentum remained with the home team.

Barrett was pinged for a rugby league knock-on – it was really a knock-back – before Reimer actually knocked on. And the Blues grew an extra leg. They won a kicking duel after the ball was inexplicably kicked to Barrett, who passed wide to Perofeta, freeing Reiko Ioane for a 70m burst of running, offloading, supporting, stepping, and quick ball from two rucks, before Mark Telea iced the play with a try.

The ghosts of many Barbarians nodded as one: respect.

The penalty count was 5-3 against the Brumbies. Nepo Laulala was owning James Slipper in the scrum. And at half-time it was a 20-7 lead for the home side, and one foot in the final. 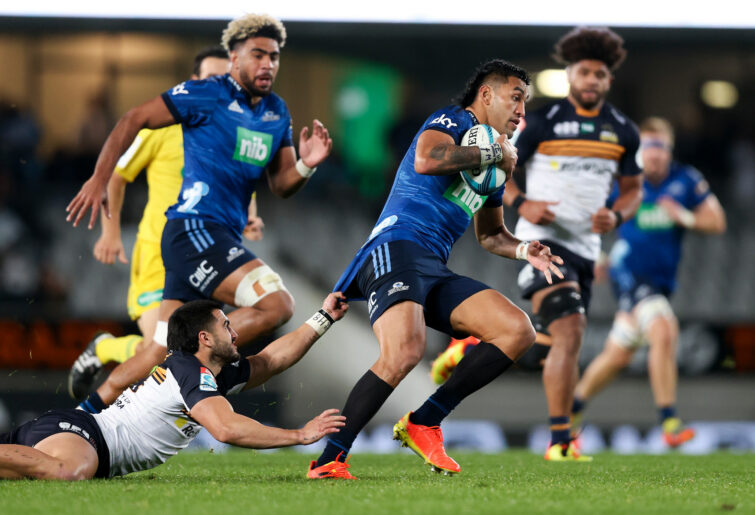 Rieko Ioane of the Blues is tackled. (Photo by Phil Walter/Getty Images)

“Too many mistakes by the Brumbies,” observed Horan.

“When we’re in trouble, we’re going up the guts; they’re dominating around the ruck and in the scrum,” he said.

Into the second stanza, and Scott Sio replaced Slipper in the 47th minute. Nick Frost came on, too, for Cadeyrn Neville. But the Brumbies’ lineout got no better. Nor did the scrum.

Then, almost out of nothing, the worm turned the visitors’ way. Kurt Eklund lifted Andy Muirhead, the winger landing on his shoulder. The hooker was off for ten minutes, and was perhaps lucky to get away with even that – it looked head-first.

The Brumbies ran the ball hard and wide, earning good yards through Muirhead and Banks. A lineout 15m from the Blues line begat further ball and man movement. The Brumbies went to their pet play: the driving maul. Backs got involved.

The ball went to Tom Wright who was held up by Stephen Perofeta. Banks went to the line again. The Brumbies went to their weapon, again.

Noah Lolesio hooked the conversion and the Brumbies trailed by eight, with 20 minutes remaining. It would prove a pivotal miss.

The Blues went into a huddle and breathed together.

Wright saved a try on a sliding Barrett, who was over had he not. Roger Tuivasa-Sheck knocked on. The rain continued to belt down. The Blues’ pressure in defence was telling, but the Brumbies were still up for the fight: Hudson Creighton grubbered the ball into touch with his team on the attack.

They won a penalty. A lineout close out. You knew what was coming.

The ball went left and right. Advantage went for many phases, the Blues’ defence immense in the wet. When Tom Robinson was hurled into the air to steal the lineout ball, that was the match. The Brumbies just didn’t realise it yet.

They scored through Lachlan Lonergan again. But when Lolesio took his pot-shot and Tu’ungafasi repelled it, as that old Scottish song goes, the Brumbies were sent home to think again.