There wasn’t much in the Socceroos’ 2-1 win over the UAE that suggests they know what they’re doing, but if you’re going to Steven Bradbury your way to a World Cup, it might as well be now.

The first half of Australia’s nail-biting playoff win over the United Arab Emirates in Doha was one of the worst we’ve ever witnessed from a Socceroos side.

With a spot in the inter-confederation playoffs against Peru on the line, the Socceroos did exactly what they’ve done for much of the past nine months – sat back, played conservatively, left a gaping chasm in midfield and hoped a team-mate would take responsibility.

That it was Martin Boyle who ended up being the player to take that responsibility was no real surprise, because the winger who plays for Al-Faisaly in Saudi Arabia has been Australia’s most effective player since his debut some 17 caps ago.

But Ajdin Hrustic is not far behind him, and it was his thunderous volley that sent the Socceroos past a woeful Emirati side and into a meeting against the infinitely more dangerous Peru.

And if we thought the Peruvians weren’t invested, their government has already declared Monday a national public holiday just so fans can watch the game.

It’s a stark reminder that, unlike Australia, football comes first in just about every other part of the world.

We hardly need much reminding of Peru’s quality, since La Blanquirroja played us off the park in that 2-0 win over Bert van Marwijk’s side at the 2018 World Cup in Russia. 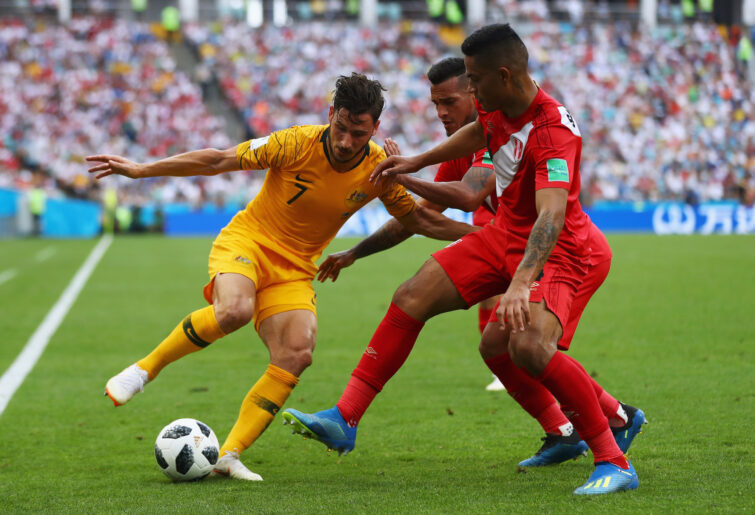 And just like the Socceroos, Peru is also home to a striker who some believed should never have been called up in the first place.

Gianluca Lapadula may not be a household name in Australia, but he’s quickly become a cult hero in Peru. That’s because the Turin-born Benevento striker is fanatically devoted to his national team.

Lapadula played a solitary game for Italy B back in 2017, but the one-time Milan striker qualifies for the South American side through his Peruvian mother.

And although he’s only scored seven goals in total for his new national side, Lapadula is immensely popular in Peru for his all-action style and willingness to physically throw himself about.

He’s already scored a couple of key goals in Peru’s qualification campaign to date and, not surprisingly, he scored the winner against the All Whites in Barcelona last week.

In other words, the Socceroos come up against an opponent boasting a striker who actually scores goals.

But that’s unlikely to worry coach Graham Arnold, who has approached the final round of qualifiers with an upbeat disposition that’s close to bordering on the insane.

Arnie’s latest suggestion is that our best chance to beat Peru is by displaying “Aussie DNA” – as if we’re not just about to play a national team renowned for their passion.

You get the sense Arnie will say just about anything at this stage of the campaign.

And truth be told, this Peruvian side is beatable.

But the Socceroos will have to display some competent playoff football along with whatever ‘Aussie DNA’ is supposed to be if they’re to squeeze through to the World Cup finals via the back door.

This has been a hot mess of a campaign overseen by a coach who has looked increasingly out of his depth with every passing game.

But this is the national team, so we have to believe.

To Arnie, Ajdin, Martin and the rest of the squad, now is the time. This may have been the most unconvincing qualification campaign in history, but no one will remember that once you book your ticket to the World Cup finals.