Australia A is back. Who are they going to pick?

Understandably, with the Wallabies 35-man squad just announced for July’s England series, many are scratching their heads about those who missed out.

THE OFFICIAL SQUAD HAS NOW BEEN NAMED

Reece Hodge and Fraser McReight are two especially notable absences. The former had been Australia’s backline Swiss-army knife, as well as long-range goal-kicker, for the past several years. While McReight is fancied by many to be the Wallabies’ next great open-side flanker.

Surely these two had to be in there…

Alas, they cannot all be picked.

But, unlike in recent times when the ‘nearly-made-its’ would now return to club-land, the next best Aussie 30 players will get a significant consolation prize this year. Beginning on July 2, a 30-man Australian A squad will compete in the Pacific Nations Cup series against (in order): Samoa, Fiji and Tonga.

It’s about time. Many would have forgotten the last time an Australia A team strutted its stuff on the international stage. Former players – now Stan commentators – Drew Mitchell and Morgan Turinui both suited up on that occasion when they fell 21-18 to the Maori All Blacks. That was way back in 2008.

Fourteen years between drinks is far too long. In the intervening years, the aforementioned Maori side have played another 18 international fixtures, plus other games against Moana Pasifika, etcetera. This year they lock horns with Ireland twice, likely featuring players destined to one day wear the famed black jersey.

Since Australia A last played, the Maori ABs have blooded many future national-team stars, including Aaron Smith, Cody Taylor, the Ioane brothers and Damian McKenzie just to name a handful. 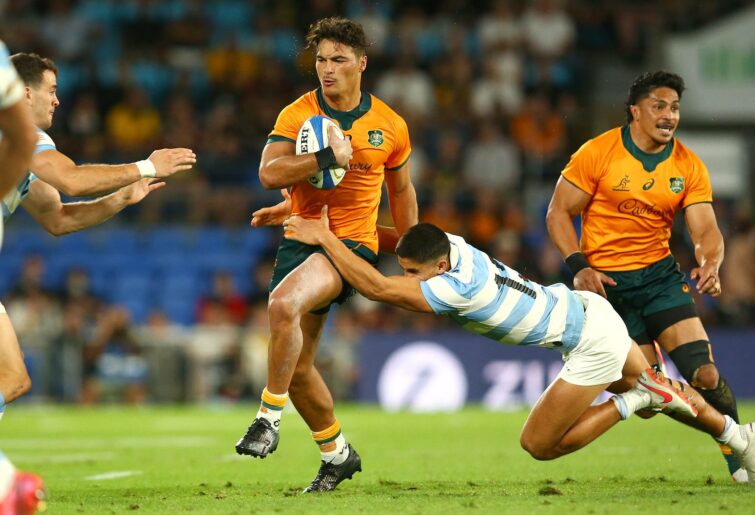 Jordan Petaia of the Wallabies. (Photo by Jono Searle/Getty Images)

Obviously, they cannot just copy what the Kiwis do. Fielding an indigenous side against international opposition is currently not a feasible option. However, an A team competing annually in multiple international games is surely a no-brainer. It’s the ideal opportunity to give fringe Wallabies exposure to top-flight rugby.

I’m not suggesting that Australia A is the panacea to cure all of Aussie rugby’s ills. But who would argue against the Wallabies-in-waiting needing more gametime against high-calibre opposition? Particularly with The National Rugby Championship being passed over for a third straight year, and Covid-19 cancelling out plenty of other rugby matches.

Looking ahead to facing the three pacific island teams foresees a very stern test for the Aussies. You’d expect them to topple Tonga even with former Wallaby Israel Folau and a couple of former All Blacks in their line-up. Samoa are always a tough proposition, and have a history of favourable results against Australian teams.

The Flying Fijians will be even tougher. Remember the scare they gave the Wallabies at the 2019 Rugby World Cup? They held the lead over their much-fancied opponents into the game’s final quarter that day. Three years down the line they should be even better. Furthermore, there will be no Marika Koroibete (128 metres gained, one try) to contain this time.

Playing at home will also give Fiji a mighty lift. Anyone who watched the Fijian Drua’s home games against the Highlanders and Chiefs in this season’s Super Rugby Pacific will understand that.

The Drua raised their game several levels with the local support behind them. It will be no different for the national side playing in front of a full house in Lautoka. Anybody who puts money on Australia A in this game is a brave person.

Having said that, the Green and Golds should field a strong team, laden with former and future Wallabies. Without being privy to the musings of Rennie or the A-side’s coaching staff – Jason Gilmore, Rod Seib, Michael Todd and Geoff Parling – one can only speculate on who will catch the plane to Suva.

Assuming that Irae Simone and Fergus Lee-Warner are busy packing for Europe (not certain), while Josh Flook and Tom Hooper are still being kneaded on the training table (also not certain), the team could look something like this (* denotes capped Wallaby):

Filipo Daugunu, Dylan Pietsch, Will Harris and Tim Anstee should also play their part in the series.

With that out there, I now have visions of contorted faces, and incredulous questions/exclamations being sprayed at hand-held smartphones …

“Pulu’s gotta be there after making the preliminary squad.”

All will be answered when the team is announced on June 15. In the meantime, please feel to do a bit of your own speculating below.