With three NRL coaches having been booted – well, booted-ish in one case, but we’ll get to that – there has been an understandable focus on which trio will land these newly vacated gigs.

I’d say it’s a bit grubby to immediately talk about who gets the new gig rather than take a moment to reflect on the sacked blokes’ efforts, but no coach wants to read their own career eulogy.

Trent Barrett was the first to lose his job – and no, despite Phil Gould’s insistence to the contrary, he’s not the aforementioned booted-ish coach, as I’m of the firm belief he was pushed rather than jumped.

That said, while he’s now left two head coaching gigs in unceremonious circumstances and with no notable success, his relative youth and the mere fact he took both jobs on suggest Baz doesn’t believe he’s a spent force. It’ll be a few years before we see it happen, but I wouldn’t be surprised to see the 44-year-old tossed one more clipboard.

Next to go was Nathan Brown “parting ways” with the Warriors and then a few hours later, Michael Maguire, who absolutely was booted, having overseen finishes of ninth, 11th and 13th during his time in charge.

Despite the Wests Tigers getting progressively worse during his tenure, the coach’s success in breaking the Bunnies’ grand final drought means he was being spoken of as a potential long-term replacement for Barrett at the Bulldogs before Madge had been given his own marching orders.

While the Warriors have emphatically ruled out making a play for Maguire, he’s another coach who you’d suspect has been sent to the proverbial bench for a spell, rather than told to have an early shower.

The Warriors said they “needed to make an immediate change” to their coaching set-up, with club legend Stacey Jones replacing Brown.

However, despite Brown’s only full season resulting in a 12th-placed finish, being in charge for the club’s worst-ever loss – a 70-10 pantsing at the hands of the Storm on Anzac Day – and the club being on a five-match losing streak at the time of Brown’s departure, he was the booted-ish mentor.

“Nathan told us he had made a personal decision that for family reasons he wouldn’t be able to relocate to New Zealand as originally planned for the long term,” said club CEO Cameron George.

“We fully appreciate his position and the call he has made.

“Given those circumstances we agreed we needed to make an immediate change.

“It’s tough for everyone involved but, in the best interests of the club, we felt we had to go in a different direction now.

“Nathan has worked so hard for our club and we are extremely disappointed it has come to this. We’re truly grateful for what he has done and wish him and his family all the very best for the future.”

Despite once again only getting sorta-fired, today we can write Brown’s coaching eulogy, with the man himself having declared on Fox Sports “my head coaching days are over”.

“I can’t coach if my daughters aren’t prepared to move anymore so it is their fault as much as I love them,” he said.

Look, Browny was just winding his girls up, as a Dad is wont to do.

But c’mon mate, maybe your days as an NRL head coach are over because you’re just not very good at it.

Coaches bring different skills to the table. Wayne Bennett is regarded as one of the all-time great man managers, while Warren Ryan was one of the best tactical minds in the game’s history.

Nathan Brown? He was the king of the press conference, an absolute master of media management.

He got four years at Newcastle, overseeing two wooden spoons in his first two seasons, before pulling the Knights out of the cellar for an 11th-place finish in 2018 and was overseeing a disappointing 2019 season when the club announced that “both Brown and Knights chief executive officer Philip Gardner feel it’s the appropriate time to move on with his career”.

Despite having had four seasons to assemble the roster he wanted and get them playing his desired style, by August 2019 the team were only a mathematical chance of playing finals footy.

Yet Brown apparently wasn’t sacked, he departed Newcastle on mutual terms – just as he’s done at the Warriors.

Even in his first stint in Australia’s premier rugby league competition, at the Dragons, Brown didn’t technically get sacked.

Despite having one of the most stacked rosters in the NRL, Brown struggled to get his charges to perform, having a success rate of 53 per cent during his 151-game stint in charge of the Red V. He was eventually replaced by Wayne Bennett, but even so, he saw out his contract to the end of 2008, seeing him amass six seasons at the helm. 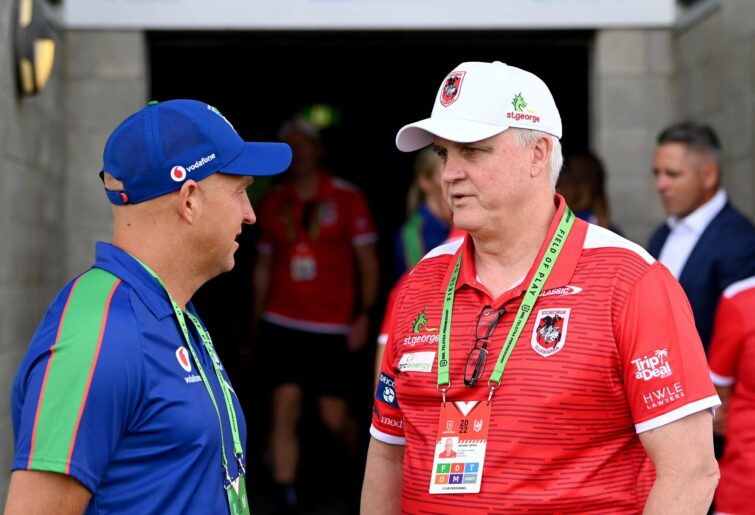 It’s a pretty insane stat – what other coach essentially loses six out of every 10 games they oversee yet manages to stay in charge for almost 300 games?

Well, according to the Rugby League Project, there’s only one coach with more games in charge than Brown who has a winning percentage in the 40s – Ricky Stuart, and his 49.9 per cent of victories per games played will be back to an even 50 if the Raiders get a win over the Knights next weekend.

Browny seems like a decent bloke and I suspect his ‘aww shucks’ demeanour has seen him saved from the rugby league reality – winning, or a lack thereof – that claimed the jobs of far more intense people, such as Maguire.

The wild thing is that he’ll sign off on his terms, likely confident in his own belief that he could pick up another head coaching gig if he wanted one, because he’s developed a reputation as a ‘rebuild’ coach. Honestly, he’s probably not deluded in this belief, based on everything that has happened in his career to date.

But the reality is he’s not a rebuilder, he’s a lowest-ebb coach.

Brown’s the guy who smiles when the chips are down and makes everyone feel a bit better about their misfortune. But he’s not the guy to lead you out of the doldrums – that falls on the coach who comes after him.

Which isn’t to say Brown has no future in professional rugby league – quite the contrary. His aforementioned back-rubbing experience sounds exactly like what you want in an assistant coach. And with almost 300 games on his CV, if a complete rookie gets one of the three vacant jobs going, that person could do a lot worse than at least interview Brown for a role on staff.

But after almost 20 years in three countries (even if the Warriors were based in Australia during his tenure) Brown’s time as a head coach has drawn to a close.

Congrats on a frankly ridiculous career Browny, one we’re unlikely to ever see anything comparable to again.