State of Origin has just started in the more popular of the two rugby codes in Australia. That means Maroon against Sky Blue, Queensland versus New South Wales in a time-honoured rivalry. It also means a notoriously tough task for referees, who tend to come in for stick from either one state or the other.

Harrigan cops a full spray from Tallis, and there is no doubt at all about his response: “I won’t wear it”. Off. Bill Harrigan was probably Australia’s finest umpire in any sport at the time, and he went to referee a record 21 State of Origin matches, 393 first-grade games and 10 Grand Finals. If you couldn’t bank on Bill Harrigan to be even-handed, who could you trust?

Officiating in the NRL is currently in a state of crisis, with referees tied to a ‘national methodology’ which strait-jackets their freedom of action all the way down to the vocabulary they have to use for different kinds of tackle. As ex-Rooster and NRL referee Luke Phillips explained.

With New Zealander Ben O’Keefe elected to rule on the semi-final between the Blues and the Brumbies, affairs were primed for an Origin-style flare-up if the scores remained close, and so it proved. O’Keefe is on the international panel and one of the top 10 officials in the world, but it was his turn to cop the spray from Dan McKellar after the Brumbies’ agonising one-point loss.

The Ponies’ head honcho zeroed in on two decisions which probably cost his side the game. The first was O’Keefe’s reluctance to reward an on-ball turnover by Luke Reimer with a potentially game-winning penalty:

“Luke Reimer appeared to be well and truly on the ball directly in front of the posts. Did you guys see that?

“I saw Luke Reimer on the ball, surviving clean-out directly in front of the posts. When you’re playing at Eden Park and an Australian team hasn’t won here forever and a day, you need a bit of luck, don’t you? And we just didn’t get that tonight.”

Here is the incident:

Reimer is straight on to the ball, and for a couple of key seconds the ball-carrier Luke Romano hangs on to it. At any other stage of the match that would probably be a penalty to the defence, but Ben O’Keefe allowed play to continue. Was he showing great feel for the game, or just an unconscious home bias?

The match further muddied the waters of the contentious head contact issues besetting Rugby. Blues’ number 7 Adrian Choat escaped with a yellow card for clear head-high shot on Tom Wright in the 75th minute, although at that stage of the game the colour of card did not matter.

More importantly, Blues hooker Kurt Eklund would have been breathing a huge sigh of relief after only getting 10 minutes, rather than 20 for this tip tackle on Andy Muirhead in the 52nd minute:

With half an hour of the match still to run, that did matter. McKellar again:

“I’ve got 23 players and 15 staff in there [wondering] ‘What is the game doing around cards?’. I’ve got Len Ikitau sitting in the grandstand for an accident last week – hasn’t been able to play, possibly won’t play against England in the first Test. We had a guy tipped on his head, we’ve got head-on-head contact. One’s a yellow, one’s a red.

“And I’m not complaining just about tonight but as a game. What direction are we going here because players don’t know what’s yellow, what’s red. I don’t know what it is. How’s Joe Public going to have any idea?”

The curious aspect about the tip tackle was that Ben O’Keefe started not on a red or yellow card, but on a penalty: “I’ve just got a penalty [for a] lifting tackle here. At the moment I’m on a penalty only, I don’t believe there is a high level of force.”

There is a degree of danger: the lift goes well through the horizontal, Muirhead is driven toward the ground by two tacklers and drops on his head and shoulder simultaneously. Should the adjudication process for a top official like O’Keefe not have started between yellow and red?

At the knockout stages of rugby competitions around the world, north and south, ‘state of origin’ also has another significance. It means rugby played closer to the bone, closer to source at the set-piece.

The Blues grabbed the first half by the scruff largely through the strength of their scrum, where they won four penalties from their All Black tight-head Nepo Laulala. The Brumbies’ second half resurgence arrived on the back of their close-range driving maul, which generated two tries and another three penalties.

As McKellar commented after the quarter-final against the Hurricanes, before the game against the Blues was ever played.

“It’s finals football. You’re not going out there last night and playing a whole lot of razzle-dazzle. It’s just not going to happen, the ball was like soap.

“But that didn’t take away from the contest. I’m sure to a neutral fan they would have enjoyed that contest and the resilience and the grit; it was a semi-final or final vibe.

“The reality is Saturday was going to be built around defence pressure, set-piece pressure and taking your opportunities when you were at the right end of the field, and we did that.”

In the first period, Nepo Laulala expertly shaped O’Keefe’s perceptions of dominance at the set-piece at the very first two engagements:

This is just a reset, but look how much work Laulala puts in after the scrum has collapsed and the whistle has blown. He is intent on creating the impression that it is he who is moving forward, and that it is his opposite number James Slipper who needs to pull the scrum down to relieve the pressure.

“Heads up, bind up, keep it high”, said Ben O’Keefe before the second attempt:

The scrum does not jolt forward more than a metre, but O’Keefe’s mind has already been made up by the picture which has been so carefully seeded by Laulala: 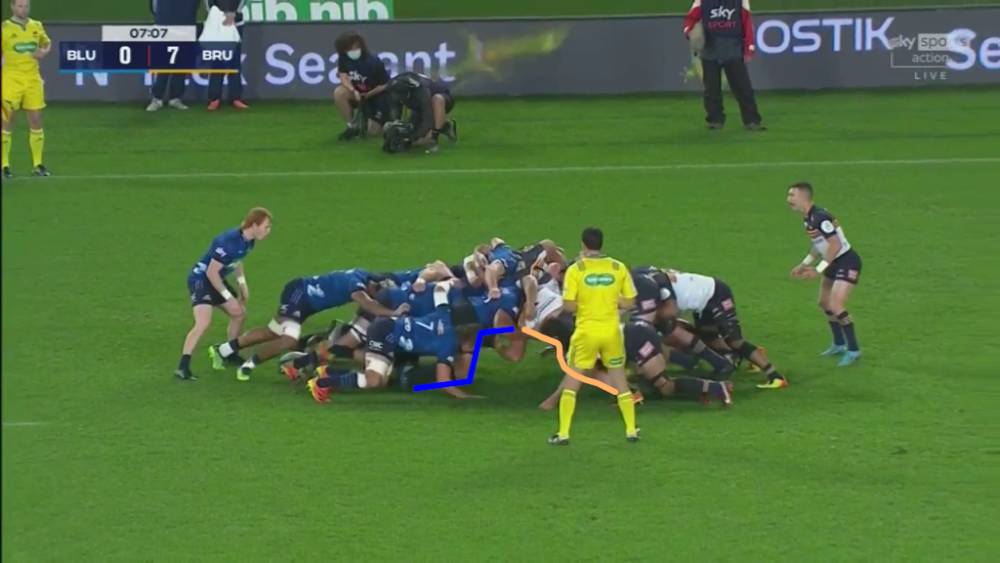 This is the critical moment. Nepo’s shoulders are in alignment, ‘Slips’ left shoulder has dipped below his right and his elbow is down; Nepo’s body-shape is compact while Slips has become long and slightly over-extended. It is a win for the Blues which rippled out far beyond the single event: 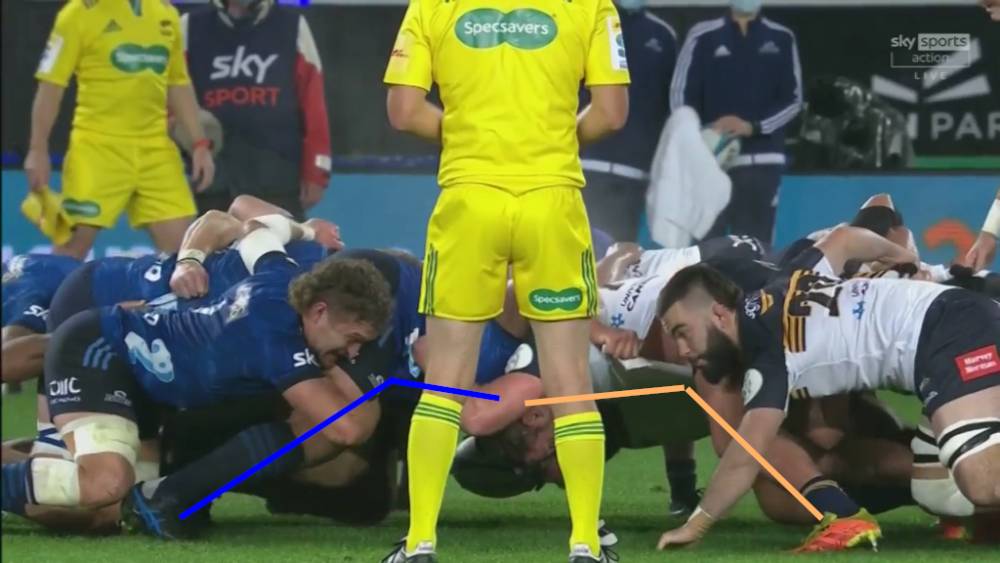 This is the third set-piece and it is a 50/50 call – but previous perceptions make it much closer to 80/20 because of the initial impression Nepo has printed on the referee’s mind. Another penalty for another collapse swiftly followed, and the imprint was still active by the time Slipper’s replacement Scott Sio had arrived on the field in the 50th minute of the game. He suffered the same fate as his predecessor.

The Brumbies took over close to origin in the second half. At the heart of their comeback was the driving lineout, and the role of Darcy Swain in their maul structure was vital. Swain had given notice of his importance to this aspect of the Ponies’ forward play at the end of the quarter-final against the Canes – not as the catcher, but as the blocker on the receiver’s left shoulder:

Swain penetrates well beyond the receiver (replacement lock Nick Frost), to the point where he can engage the back defender, Ardie Savea. In the second part of the operation, he peels away no fewer than four Hurricanes’ defenders to the left while the drive rotates away to the right. The Brumbies scored a couple of phases later.

Darcy Swain gave early notice that he would be able to do the same against the Blues: 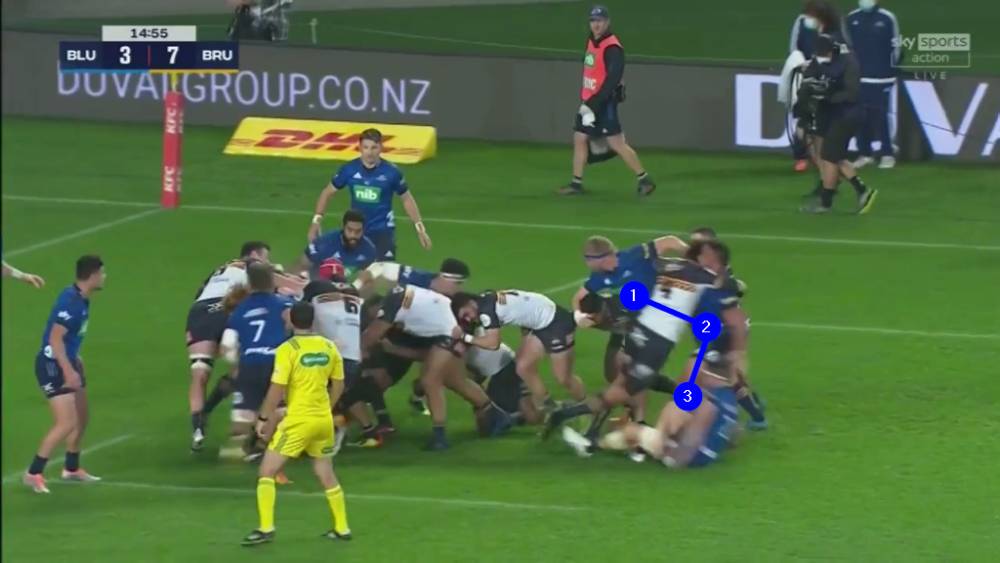 Swain advances ahead of the receiver Caderyn Neville and is able to take out all of Eklund, Laulala and Josh Goodhue over the left side and the drive thunders ahead like a freight train in their absence.

The young Brumbies second row gained ever more traction on that left corner of the blocking wall, especially when Nick Frost arrived to do the catching in mid-line: 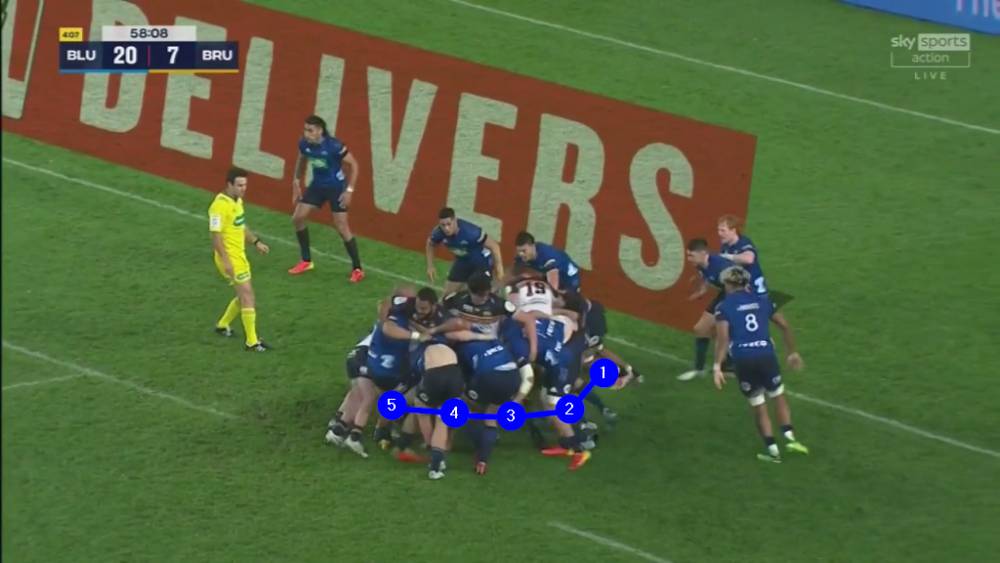 As in the instance against the Canes, Swain and Scott Sio between them are able to peel away five of the Blues forwards, leaving only Hoskins Sotutu and Akira Ioane to oppose the inevitable advance of the Canberra forwards across the goal-line.

The final try of the match occurred after a neat bit or role reversal between Frost and Swain:

On this occasion Swain makes the catch and Frost does the blocking work on the trio of defending forwards to the left of the drive. It set the scene for a nail-biting climax, and even more controversy about refereeing ‘origin’ in the aftermath.

As one of the most celebrated sporting officials in Australia in any sport, Bill Harrigan was no stranger to controversy. It is impossible not to referee almost 500 games of top-class rugby without courting it, especially if you are mediating the bitterest inter-state rivalry of all: State of Origin.

If the score between the Blues and the Brumbies stayed close, Kiwi referee Ben O’Keefe was bound to cop a spray, almost certainly from Aussie. It did, and so did he. O’Keefe is deservedly a top 10 international panel official, but there has to be a big question-mark over whether Angus Gardner would have seen the incidents involving Luke Reimer, Adrian Choat and Kurt Eklund with same pair of eyes, and come to the same conclusions.

The semi-final at Eden Park will have done nothing to assuage the worries of those who fret about the consistency of application of the rules governing head contact. Are the Blues and the Crusaders probably the two best teams in Super Rugby Pacific 2022? Absolutely. Were the Brumbies given a fair shake at breaking the Eden Park hoodoo? Not so much.

Like most knockout matches, the match was played out close to source, near the blood and bone of the set-piece. The Blues’ advantage at scrum-time, and the extra width of their play in counter attack, just about outweighed the Brumbies’ excellence at the close-range lineout drive. But it was a mighty close-run thing. A Waterloo for the Brumbies in 2022, but a mere preface to the Bledisloe Cup ‘Origin’ matches between Australia and New Zealand later in the year.