The NRL judiciary’s decision to clear Felise Kaufusi of a dangerous contact charge has divided opinion after the Storm forward appeared to elbow Sam Walker in the head.

Kaufusi appeared via video link on Tuesday night and his lawyer, Nick Ghabar, successfully argued that the second-rower unintentionally made contact with Walker’s head as he was tackled to the ground.

He claimed the defenders had pinned his arm which “couldn’t go anywhere else” as he fell to the SCG turf.

Kaufusi was only risking a fine but wanted to clear his name and ensure he would not have another strike on his record in case he was charged later this season.

He could have accepted an $1800 fine with an early plea but risked a $2500 sanction by fronting the panel of judiciary chairman Geoff Bellew, Tony Puletua and Bob Lindner.

The NRL’s prosecutor, Patrick Knowles, said Kaufusi repositioned his arm and that the contact was dangerous and could have been avoided. 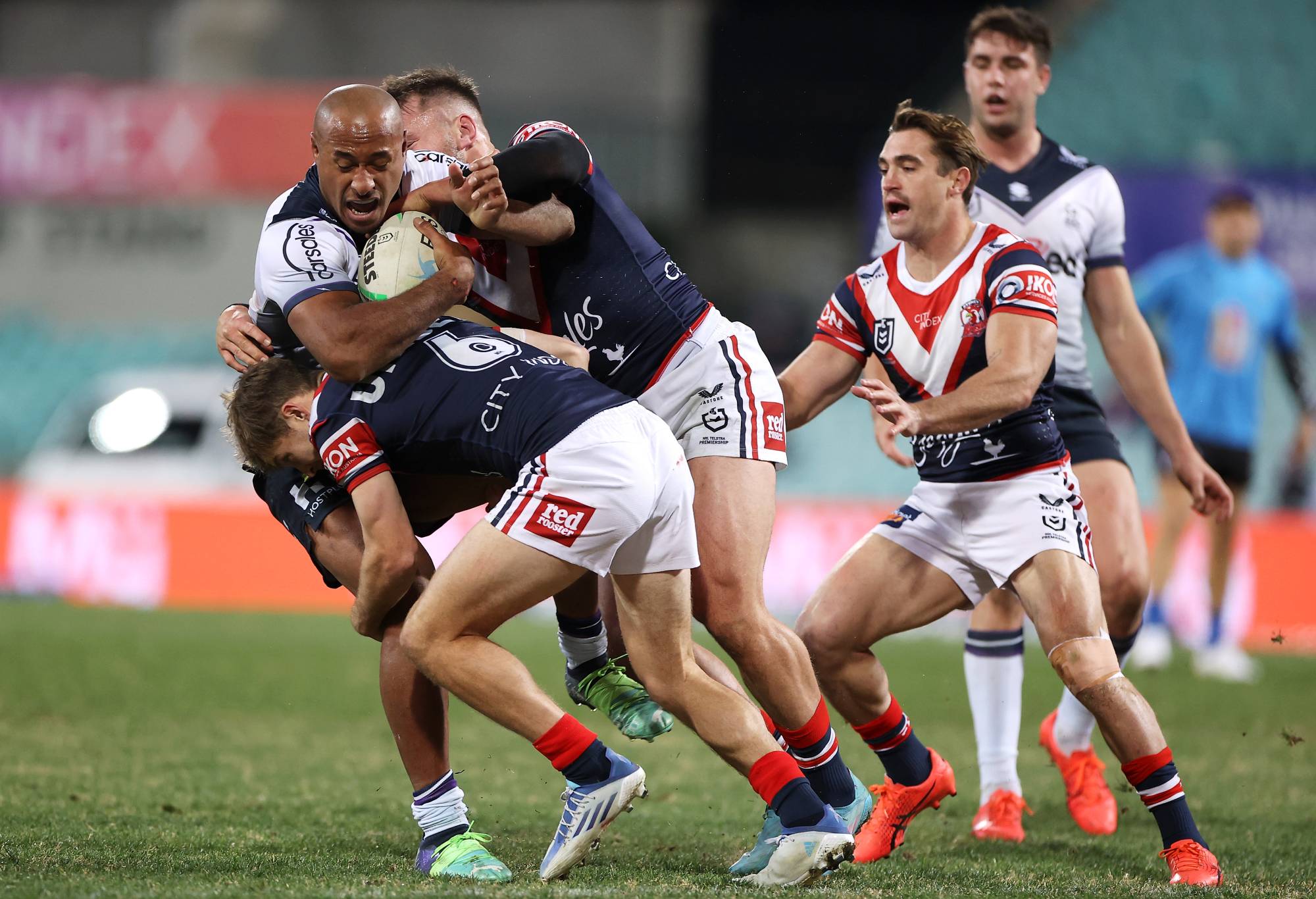 League legends were divided in their opinion. Former NSW skipper Paul Gallen had claimed on 100% Footy that Kaufusi should not have been charged – “Did he mean it? You know what? He probably did. But it’s a contact sport, and I just think it’s part of the game. I don’t think he should have been charged at all.”

Immortal halfback Andrew Johns said the Maroons veteran should buy a lottery ticket after only facing a fine due to the low grading. “They’ve pretty much said he is guilty, so you elbow someone in the head and you get a fine,” Johns said on Nine on Sunday. “So $1,800 – I think Felise should buy himself a lottery ticket. Very lucky there.”

Greg Alexander in commentary said Kaufusi “knew exactly what he was doing”. Walker had to go off for an HIA after the incident but returned to the field.

Former NSW coach Laurie Daley said Kaufusi could have copped a week on the sidelines for the hit.

“I thought a fine was probably the right penalty, he possibly could have got one week’s suspension because it didn’t look great,” he said on The Big Sports Breakfast on Wednesday.

“As Ghabar said last night once he made contact and the shift came in the tackle, and the other elbow ended up around the face of Walker, whose responsibility is it then if it’s locked as you’re going to the ground? Is it the ball carrier’s responsibility to move his arm or what is he supposed to do? And they argued that successfully.”

Daley said the similar Ryan Matterson incident last year which earned Kaufusi a two-match ban was bad but this one was harder to prove intent.

Halfback Sam Williams has left Canberra after his third stint at the club as he looks to prolong his playing career.

The 107-game NRL veteran has been stuck in NSW Cup and hasn’t cracked the Raiders’ first grade side this season, and will immediately depart the club.

Williams, 31, said he’s received attention from other NRL clubs as well as from England’s Super League, but said making sure he didn’t take opportunities from younger Raiders’ halves was his main reason for leaving.

“The club’s in a really good position going forward especially in the haves and I didn’t want to stay around and stop a younger player coming through the system and being able to get game time, whether that’s in reserve grade or first grade,” he told reporters.

“It’s never easy, but I think it would have been selfish of me to to keep playing the rest of the year and prevent someone else from having that opportunity.”

Williams, from nearby Cooma, said he’d joined the club around 16 years ago as a junior, having also played at St George Illawarra, Catalans Dragons and Wakefield Trinity to date.

“I’m lucky in the sense my body’s held up pretty well over the years and I’m not moving on because I can’t get out of bed and go to training anymore,” he said.

“Over the next week or two, I’d like to have a few decisions made … whether that’s the long term plan, I’m not sure.” 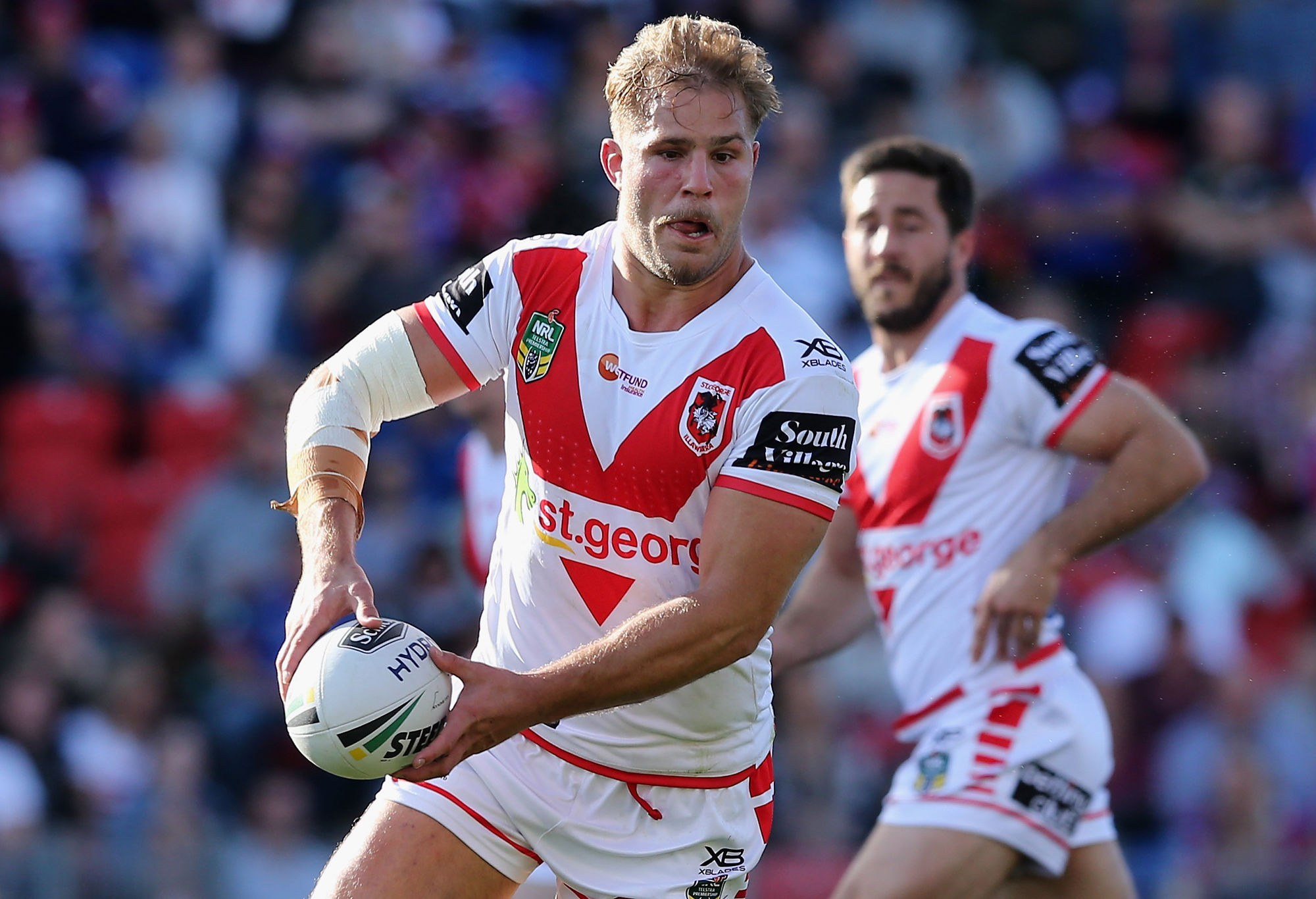 De Belin could switch to Kumuls

St George Illawarra’s Jack de Belin won’t be included in Papua New Guinea’s squad for their upcoming Test against Fiji but newly appointed head coach Stanley Tepend is hopeful the lock will accept a call-up later in the year.

Tepend and his predecessor Michael Marum have held discussions with De Belin about representing his grandmother’s birth nation over the last 12 months.

De Belin only returned to the NRL last year and hasn’t played representative football since 2018, with the 31-year-old ruling himself out of Kumuls selection ahead of next week’s Test at Campbelltown.

“We have spoken to Jack and he was undecided,” Tepend told AAP. “We respect his decision and while we haven’t picked him for this Test we have left the door open for him to make a call when he is ready.

“If he wants to play in the World Cup later this year, we will happily accommodate him.

“It’s a short camp and we won’t have any players from our domestic competition or the Super League.”

Tepend has also opted to leave experienced hooker James Segeyaro out of his squad after he resumed his playing career in the NSW Cup earlier this year following a drugs ban.

“He offers a lot but hasn’t been playing over the last couple of years,” Tepend said. “It’s not to say he is totally out (of my thinking) and hopefully he can be in our team at the back end of the season.”

Tepend’s squad will be primarily filled by players from Queensland Cup side the PNG Hunters along with a smattering of NRL players.

Brisbane’s David Mead is expected to play centre alongside Melbourne’s Justin Olam, with the pair set to be named Tepend’s captain and vice-captain respectively.

Canterbury’s Bailey Biondi-Odo is due to make his PNG debut in the halves alongside Sydney Roosters playmaker Lachlan Lam, with South Sydney winger Alex Johnston the Kumuls fullback.