The Dragons led 32-0 at the break and ended the evening 32-12 victors. While this was as good as the hosts have looked all year, South Sydney’s performance was pathetic.

Rookie halfback Lachlan Ilias was hooked after half an hour, as was captain Cameron Murray, with Souths conspiring to produce five errors, five penalties and 21 missed tackles in the first 40 alone.

“I’ll sit down with Lachy and go through that a bit,” said Jason Demetriou. “The team was under the pump and Blake (Taaffe) gives us some energy so I was trying to get a response out there.

“Kodi Nikorima has experience in that position and we needed some experience out there. That was the thinking.

“Lachy has been great for us and he’ll learn from that. I haven’t spoken to him yet but I’m sure he’s disappointed.

“It’s not on him, it was about getting a response from the team. That first half wasn’t on Lachlan Ilias, no doubt.

“I’ve got no doubt that Lachy will be our long-term half. He’s a guy that’s barely played any footy over the last two years, he’s 14 games into his NRL career and we’re 20-0 down. It’s not fair to expect him to be the one to get us out of that.”

Murray – who is expected to be picked for Origin on Sunday – managed his entire first 25 minutes without taking a single run while Tom Burgess managed just two while missing three tackles.

“That first half wasn’t us,” added Demetriou. “It snowballed out of control. The harder we fought, the worse it got because we were ill-disciplined.

“There’s players in the squad that are ready to play, but it’s not about wholesale changes, it’s about sticking together. We’ll show that next time out.”

Take nothing away from the Dragons, however: they were excellent, even if their opponents allowed them to be. Veteran hooker Andrew McCullough’s 300th game celebrations could not have been made more comfortable.

Zac Lomax was dreadful last week but bounced back, setting up two tries with smart passing, while Blake Lawrie managed nearly 200m with over 20 carries.

Ben Hunt, as ever, was superb and competed for everything. Even in the late second half, with the game as done and dusted as any this year, the halfback was chasing for everything.

“We had our best half of football,” said Anthony Griffin. “We didn’t complete our first two but after that we surged.

“I was happy for them because it’s a hard road trip to Townsville and a short turnaround, but we prepared well, played our best football and if you put yourself in that position, you can get right on top.

“It’s the old game of two halves. We had all the ball in the first half and they did in the second, but I thought we scrambled well and hung in there. It was good reward.

“It showed a lot of character. Last week was one of the worst performances of their season.

“I was surprised at the scoreline. In the NRL, you don’t ever expect to lead 32-0 at half time.

“But you could feel it all week in the way we prepared and how we were really disappointed with the way we played against the Cowboys. It was important we responded tonight.”

Things started horrendously for the Bunnies. Ilias dropped the kick-off and invited pressure, but Souths survived as Dragons also struggled early. Indeed, both sides combined for four errors in the first four minutes.

When the Dragons learned to hold onto the footy, they were immediately rewarded. Hunt nipped a kick in behind that Kodi Nikorima was nowhere near, allowing Lomax to gather and return to Hunt to score.

Murray’s poor night kicked in soon after: normally one of the strongest defenders in the comp, he made a clean miss on Junior Amone that allowed the five-eighth to find Ravalawa, returning to the side after a month out, to get his first. 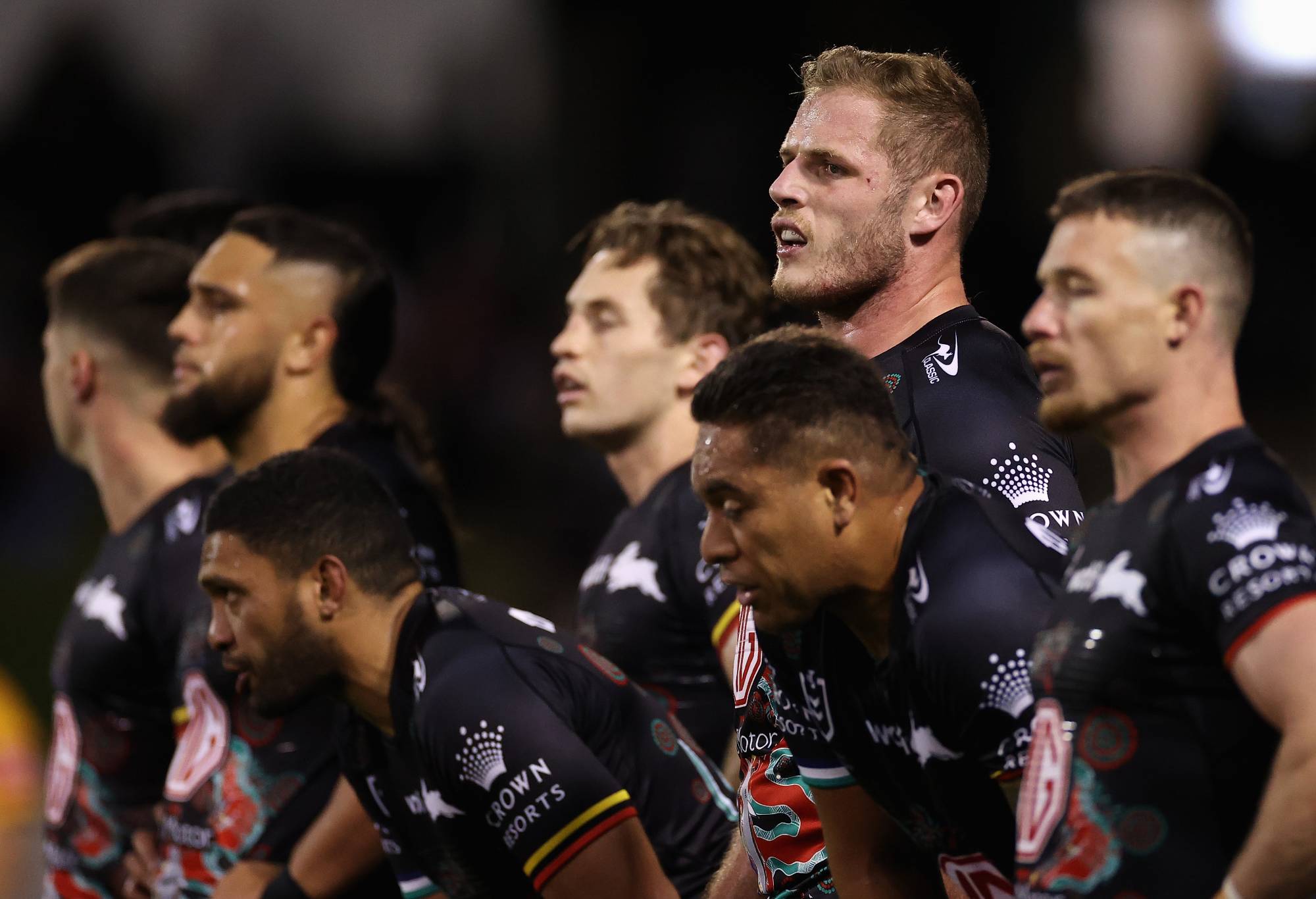 Burgess was the next to suffer, struggling to get up in the line and then making a derisory grab at Jack de Belin en route to the line.

The right edge dramas continued with Lomax able to unload a trademark flick pass to Ravalawa, who stood up Alex Johnston and sneak around him to score. It was, again, a horrendous individual effort from the would-be tackler.

It was time for the left edge to take over. First, Jaxson Paulo was caught under a high ball by Moses Suli for the simplest of kick tries, before Cody Ramsey wandered through the weakest of tackling.

As Souths gathered behind the posts, Cody Walker could be seen reading the riot act to his teammates, while Jason Demetriou dragged Ilias and Murray from the park.

The rookie coach was reported to have delivered the first major spray of his reign at the break, but it didn’t initially change much.

Despite having a man extra thanks to a professional foul from Amone, the struggles continued. Cook, among the most culpable in the first half, summed it up by throwing the first good ball chance of the second directly into touch.

The Dragons had somewhat put the cue in the rack at half-time, allowing the Bunnies to eventually build pressure. Cook managed to burrow in for one, before sending Murray onto a crash ball for another.

That was as far as the scoring went, with Souths knowing that they were beaten and the Dragons not required to make more effort.