One week after Will Power won on the streets of Detroit, the IndyCar Series raced for the third time in as many weeks, this time at the iconic Road America, a circuit that is the polar opposite of the tight, narrow Belle Isle street track.

I’ve probably said this many times before, but it remains true. The ultra-fast, flowing layout – six sensational kilometres of racetrack in the middle of the Wisconsin countryside near the tiny and picturesque town of Elkhart Lake – is my favourite stop on the IndyCar circuit outside of the Indianapolis Motor Speedway.

Judging by the mammoth crowds we’ve seen each year since the series returned after a few years of absence, I’m not alone in that.

Road America demonstrates the strengths of an IndyCar better than anywhere other than Indy. Just as I’ll never tire of watching an IndyCar hammer through turn one at the Brickyard, I won’t tire of seeing them run through the carousel and down to the kink. It’s a wonderful circuit, high on my IndyCar bucket list. It should be high on yours too.

The win means the Tennessean becomes the first driver to win on a street circuit, road course and oval, winning a cool $500,000 for himself and $500,000 for charities of his choice as part of the PeopleReady Force For Good $1 million challenge. Newgarden previously won on the streets of Long Beach and the high banks of Texas Motor Speedway.

Ericsson got around Rossi after late, while Newgarden checked out in the final restart, finishing 3.3 seconds ahead. Rossi came third, spearheading a pretty good day for Andretti Autosport, with Romain Grosjean coming home fourth and Colton Herta fifth.

Trouble not of their own doing, it must be said.

Alex Palou came out on the wrong end of a minor collision with teammate Marcus Ericsson that left him rather nonplussed. Something broke during that contact, leaving the defending IndyCar champion to finish a lowly 27th, while Ericsson, who Palou suggested was trying to win the race on the third lap, recovered to finish third. The post-race debrief at Chip Ganassi Racing will be interesting this week, especially considering Ericsson said on TV after the race that he thought the door was open and that he was at least side by side with Palou.

Meanwhile, Will Power, points leader following his strategy-fuelled win in Detroit seven days ago, was involved in a fracas with Devlin DeFrancesco. The Andretti Autosport rookie made a move that – at least from where I was sitting – was an audacious, very low-percentage one, dumping Power into the fence. The Australian eventually came to a halt headed up to Turn 6, and DeFrancesco was summoned to the pit lane to serve a stop-go penalty for avoidable contact. That of course meant little to Power, who finished 19th and lost his points lead as a result. He later suggested DeFrancesco should be parked.

Consequently, the points landscape has changed. Marcus Ericsson now leads Power by 27 markers, with Newgarden five back with a series-best three wins 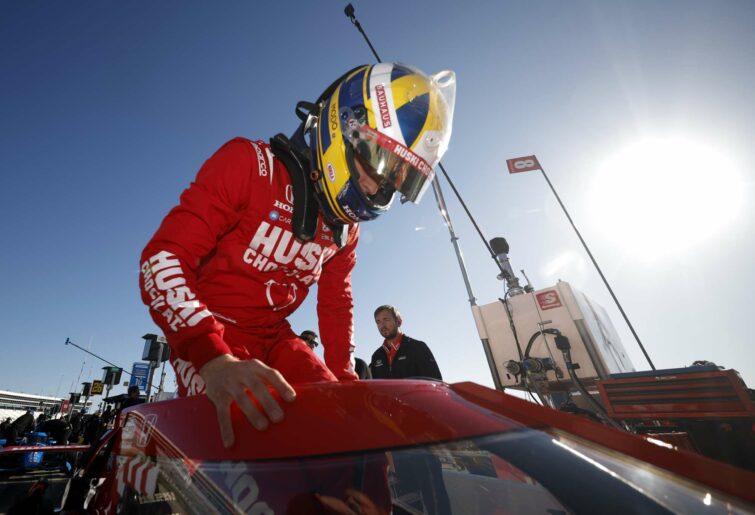 The RLL squad, despite coming into 2022 with high hopes and a refreshed driver line-up (rookie Christian Lundgaard and former Meyer Shank Racing pilot Jack Harvey joined Graham Rahal over the North American winter, while Takuma Sato departed for Dale Coyne Racing) have unquestionably had a season to forget thus far.

Sunday represented a glimmer of hope in what has otherwise been an unhappy campaign, with Rahal finishing eighth after starting way back in 22nd; Lundgaard, currently leading the rookie of the year standings, finishing tenth; and Harvey not too far behind in 13th.

There are clearly some engineering issues that the team are struggling to figure out – Rahal alluded to as much during the weekend – and it will be interesting to watch their progress as the season continues. Rahal is a polarising character in the paddock, but he is better than his current results, as are his teammates. Perhaps the Road America weekend will be the beginning of a turnaround. Time will tell.

After a string of four races best forgotten for the Supercars champion, Scott McLaughlin brought his No. 3 Team Penske Chevrolet home in seventh. It was an uneventful run for the Kiwi, which he would surely be happy with given recent results.

The hot rumour doing the rounds at Detroit was Alex Palou to McLaren SP Racing to join Pato O’Ward and Alexander Rossi for 2023, and it hasn’t gone away. In fact some reports suggest it’s a done deal – but I don’t understand why Palou would want to leave Chip Ganassi Racing, where he seems the heir apparent to Scott Dixon as Ganassi’s top dog. On the balance of this season and his championship-winning effort a year ago, maybe he already is.

Why would he want to go to a McLaren squad where the competition to be the main man would be intense? Maybe it’s about the dollars. McLaren could offer a small fortune. But Ganassi currently has a better performing team and the ability to write Palou a decent cheque too. There’s lots to watch here.

Now there are question marks and rumours regarding Rinus VeeKay, currently at Ed Carpenter Racing. Is the flying Dutchman a possibility at McLaren if they can’t land Palou and don’t want to continue with Felix Rosenqvist? Or Ganassi if Palou leaves? And who would take the empty ECR seat alongside Conor Daly?

What about Jimmie Johnson’s seat at Ganassi? Does the Carvana sponsorship there go to another driver if the seven-time NASCAR Cup champion decides he’s had enough? It’s not an unreasonable suggestion given he’s 46, and IndyCar racing is fast becoming a young man’s game.

It’s fair to say this silly season might be the silliest for some time. I can’t wait to see where everyone is once the music stops.

After three straight weeks of racing, drivers and crews have three weeks to rest and recharge before reconvening at the always-entertaining Mid-Ohio Sports Car Course.