The Roar
17th June, 2022
13
Join the conversation
Advertisement
Write for The Roar

The AFL is weighing up whether to implement another major rule change for the 2023 season, according to general manager of football Brad Scott.

Speaking to 7 News, Scott revealed a proposal to bring in a ‘last touch’ rule, in an attempt to further ease congestion and improve the flow of the game.

The rule has been trialled since 2016 in the SANFL and 2018 in the AFLW – though not inside the 50m arcs in the latter – and Scott said its success there has led to thoughts of expanding it further.

The current interpretation sees SANFL players penalised if a kick or handball goes over the boundary line without the ball being touched by another player.

“It seems fairly universal that it’s been a positive change. It’s fair to say the AFL are looking very closely at what the SANFL are doing with last disposal,” Scott said.

The merits of the proposal have swiftly been debated around the footy world, with former player turned AFLW coach Daniel Harford expressing his support.

“I think it’s a no brainer. Bring it in,” Harford, who coaches Carlton in the women’s competition, said on RSN 927.

“It takes away a lot of confusion and gets rid of all that animosity with insufficient intent decisions.

Controversial commentator Kane Cornes is also a known backer of the rule, having suggested in May last year the rule’s success in the SANFL could see it arrive in the AFL as well.

“I was really against it when it first came into the SANFL, I thought it was a bit Mickey Mouse,” Cornes said at the time on SEN SA Breakfast.

“But the more I’ve seen it and the more ridiculous the interpretation at AFL level has become, the more I think it has to come in.

“The AFL has been watching it for a while, they’re clearly cracking down on deliberate. Just clear all confusion.

“I’m about making it easier for the umpires and we’ve made it more difficult. This just cuts out all of the confusion – last possession out of bounds.

“I think we’re heading that way.”

However, another former player in Adam Ramaunaskas isn’t so sure, citing the impact of the rule in reducing boundary throw-ins would lessen the need for ruckmen and elite clearance-winning midfielders in the modern game.

“It’s part of our game. Last night [Richmond vs Carlton], Dion Prestia had 13 clearances… it takes that element of skill away,” Ramanauskas said on RSN 927. 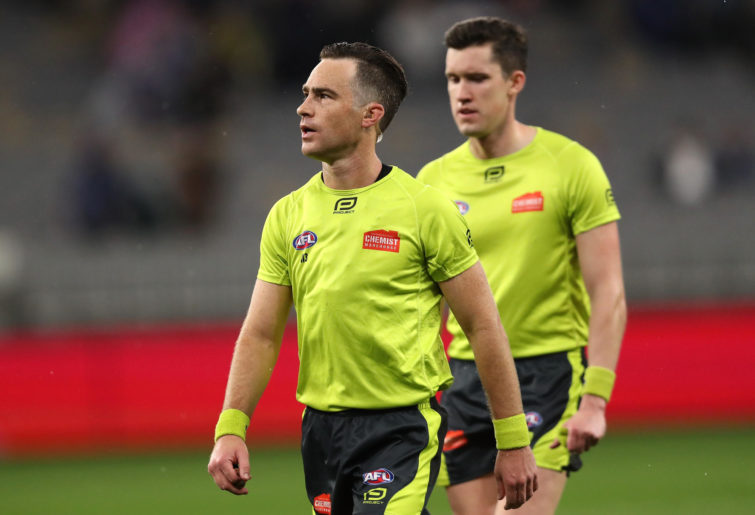 Richmond coach Damien Hardwick says Shai Bolton’s taunt of Carlton’s Sam Docherty is ‘not what we’re about’, while the Tigers star’s teammates were also less than impressed.

Bolton mockingly held the ball out at Docherty while running into an open goal in the final term of Richmond’s Thursday night win, prompting boos from Carlton fans.

Addressing the media after the match, Hardwick was definitive in labelling the incident ‘not a great look’.

“He‘ll be regretful, no question – he’ll be accountable and responsible for it. It‘s certainly not part of who he is and what we are.

“So we’re disappointed but we’ll work our way through it and support him. He’ll learn from it.

Tigers wingman Kamdyn McIntosh and co-captain Toby Nankervis also gave their thoughts on Bolton’s act, with McIntosh particularly nervous given the star goalsneak had squandered a number of chances from similar positions against Port Adelaide the week prior.

“I was a little bit, like: he’s got to kick this and also we better win the f—ing game!” McIntosh told Fox Footy, while Nankervis suggested Bolton had ‘overstepped the mark’.

“He’s [Bolton] a great player, and he plays with a lot of flair, but I was a bit worried,” Nankervis told ABC Grandstand after the match.

“There was still 15 odd minutes to go, so I wouldn’t be doing that, and I don’t think Shai would have done that if he had his time again.

“We want to be a really humble football club that plays footy in the right way and I love the way Shai plays the game, and maybe that overstepped the mark a little bit.”

Carlton coach Michael Voss has diplomatically disputed a critical score review that overturned a Blues goal during the final quarter of their lost to Richmond, saying the goal ‘didn’t look’ touched.

Jack Newnes’ snap appeared to have reduced the margin to just three points, only for the ARC to determine that Tiger Nathan Broad had got a finger to the ball.

The decision was controversial enough that former great Jason Dunstall admitted to being ‘mystified’ by the call.

“I had difficulty working out how they came up with the decision they made,” Dunstall said on Fox Footy.

“Not saying it’s wrong, but if this is the shot they’re making it from – and we believe it is – I struggle to come to grips with how this is definitive evidence. Because all his fingers are wobbling, they’re wobbling before they go up!

“I don’t actually see the ball touch it or bend a finger, which I found quite extraordinary. And then they [Richmond] go straight down the other end and they kick a goal.”

Speaking after the match, Voss described it as a ‘really big moment’ in the match.

I think it’s got to be definitive, doesn’t it?” he said.

“If you’re gonna make decisions like that in games, you’d hope it’s definitive. I guess I’ve now got the luxury of sitting back and making my own judgement with it slowed down a little bit.

“Certainly we’d want to make sure we’re absolutely 100 per cent sure before overturning something like that. Clearly the call was made and we’ve got to end up living with the result.

“It didn’t look [touched] from where I was, but I don’t watch the different angles. I’ve got one and looked at it. If it was touched, then we move on.”

However, Broad remains adamant that he indeed touched the ball, with teammate Nick Vlastuin telling Fox Footy after the match just how confident the defender was.

“Broady ran out saying ‘I told you, I told you pricks’! He was definitely adamant,” Vlastuin laughed.

Carlton still has the ability to cause some damage in 2022. It’s important to preface the discussion by highlighting that, regardless of public opinion,… 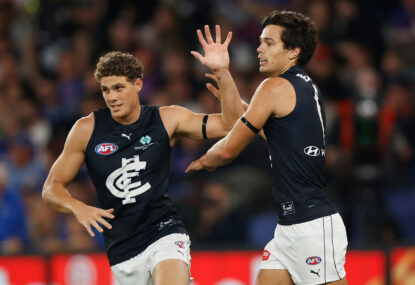