Australia’s journey to the World Cup has been long and difficult, but now that they’re confirmed as going to Qatar, the question everyone’s asking is: how will they go in the group?

Their opponents in order of appearance are France, Tunisia and Denmark.

Beginning with France, it’s clear to everyone that they have a star-studded list of names to choose from, with players like Olivier Giroud, Kylian Mbappe, Karim Benzema, Christopher Nkunku, Moussa Diaby, Wissam Ben Yedder and Kingsley Coman, who are all prolific goal scorers at big clubs. And that’s before we mention the fact they’re the reigning champions.

Statistically at least, there might be some hope for a draw in this match. Although, the last time these teams met the French won only after an own goal by Aziz Behich and a lucky goal by Paul Pogba that went in off the crossbar and crossed the line by millimetres before bouncing back out again, while Australia’s goal came from a penalty. So you can’t rule out a win to Australia if things go the other way.

Moving on to Tunisia, this one’s the most realistic for Australia to get a win from.

They managed to qualify through Africa, which is worthy of respect, but at the same time they aren’t exactly the kind of footballing powerhouse that France is. Their record is 16 wins, five losses and one draw from their last 22 matches. They have no household names and have few reliable or prolific goal scorers, indicating a lack of depth, with most of their players being either domestic or based in the Middle East. Nothing really stands out about them, and I think there’s a reasonable chance for Australia to win in this match.

Finally, there’s the last opponent in the group, which is Denmark.

This match should be reasonably challenging, but not overwhelmingly so. They have a number of good players in their squad who play at good clubs but no-one you would really describe as any kind of a superstar. They’re generally a better class than Tunisia, but not in a class of their own. While it won’t be an easy match for Australia, it won’t be a completely impossible challenge either, and it may be possible to get a win from this fixture.

Overall, the best result that Australia could probably hope to achieve would be two wins against Tunisia and Denmark and a draw against France. Should the Socceroos progress to the next stage, they’ll then have to face an opponent from Group C, which would probably be either Argentina or Mexico, with Saudi Arabia and Poland being the other two teams in that group. 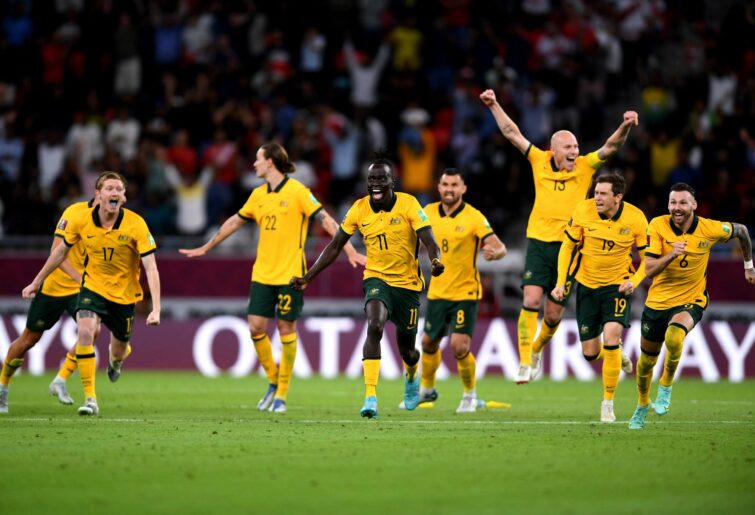 While a match against Argentina sounds like doom at first, Australia have beaten them recently at the Olympics in a 2-0 result, and the Matildas also beat them 3-0 in a friendly. So you can only hope they can beat them again, this time at the World Cup – although it is a bit of wishful thinking.

The players in this campaign aren’t exactly world-class, we know that, but perhaps the main question to ask is: are they better than those who went last time?

The squad that went to Russia in 2018 struggled to put away their chances when they presented themselves due to poor finishing. In fact not a single goal was scored from open play in their three group matches, and in the final game against Peru the players in the starting front four had just 28 goals from 201 games between them, or less than one goal every seven matches.

This time around the players seem more clinical, even if they’re only average.

Jamie Maclaren has scored seven goals from ten matches during the qualifying campaign and has been in good goalscoring form at club level. Adam Taggart is coming back from injury and was unavailable due to COVID early on but seems to be coming back into form at club level, which will hopefully continue until the World Cup begins. Martin Boyle, Craig Goodwin and Mat Leckie are all good options too.

Then there’s Nikita Rukavytsya, who was born in Ukraine back when it was still part of the Soviet Union. His prolific goalscoring abilities in the Israeli Premier League have earned him the moniker of the ‘Ling Of Israel’. With Ukraine missing out on qualifying, having a Ukrainian-born striker playing for Australia might give them someone to cheer for and would be a good story.

Jason Cummings is yet to receive a call-up, but he had a good season in the A-League, with ten goals from 21 matches, and it would be a good idea to bring him into the squad to add some depth.

There are also a few young players who could make their mark. Riley McGree and Marco Tilio are both ones to watch, especially if McGree finds form, while a number of others could also be bolters.

Cristian Volpato at Roma looks like he’s set for Italy but it isn’t quite a lock. Then there’s Alexander Robertson, who’s returning to Manchester City after a loan to Ross County while he was recovering from injury. Although he is yet to play in the EPL squad, it’s easy to see why they picked him up when you look at his highlights.

Another possibility is Deni Juric, who looked set for Croatia but last said that he hadn’t made up his mind.

But the one everyone is talking about is Garang Kuol, who scored 4 goals and an assist from 9 matches in the A-League and almost scored against Barcelona in a friendly. Coming on as a substitute he’s clearly an impact player, and he plays without fear. Reno Piscopo actually did score in that match, although his A-League record isn’t as good as Kuol with 4 goals from 22 matches.

There are also a few more young players like Alou Kuol, Kusini Yengi, the Toure brothers, Yaya Dukuly, Patrick Wood, Aydan Hammond, Marlee Francois and Rafael Pasquali Rech as outsiders. Although it may be just a bit late for them this time around, but Kuol might be the most likely.

Looking at the current players as well as a few yet to be called up or pinned down, I think there’s enough talent to say that they could be better than the last world cup squad in 2018. With that being the case, it might be possible for them to beat teams like Tunisia and Denmark.

Getting past the group stage then, may be possible.