So, the Bok squad is out for the Welsh tour, RC, end-of-year tour and importantly, also three Springbok A games. I say importantly because that can be the only reason some of the old hands and fringe players are involved.

The regular stalwarts Kitshoff, Malherbe or Ox and Nyakane are there with usual interchangeability between starting and bench. On the fringes, du Toit and Koch both provide experienced TH cover, Trevor provides both. Ntuthuko at loosehead is the bolter. Very solid selection.

No real quibble here and plenty of other props in the wings if needed but the incumbents have been playing well.

Selecting three hookers, although Deon Fourie has played there before, means Jacques Nienaber has set out the familiar stall of Bongi and Marx as the match day players. Dweba was great at Free State and brings dynamism but appears to have slipped down the pecking order in France. Will most certainly feature in the A games and act as cover for the regulars.

Johan Grobbelaar of the Bulls pretty unlucky but probably next in line.

Pretty expected and strong options with Eben and Lood starting. As Snyman is out due to an ACL injury, there is opportunity on the bench. What’s interesting is that Moerat is the only other No.4 lock in the list, which with PSDT and Mostert in the 23 would mean he has the fast lane for RG’s bench spot. Orie and Nortje are then cover and for the A games.

One player I have been impressed with has been No.4 Walt Steenkamp from the Bulls but overall no issues with the list. Hopefully we see some rotation through the Welsh series on the starter and bench roles.

The toughest pool due to the sheer amount of riches in this department but the reality is that there is only one starting spot going and that is the injured DvM’s No.8. Kolisi and PSDT will be the starters, which means it’s down to Coetzee, Louw or Roos. 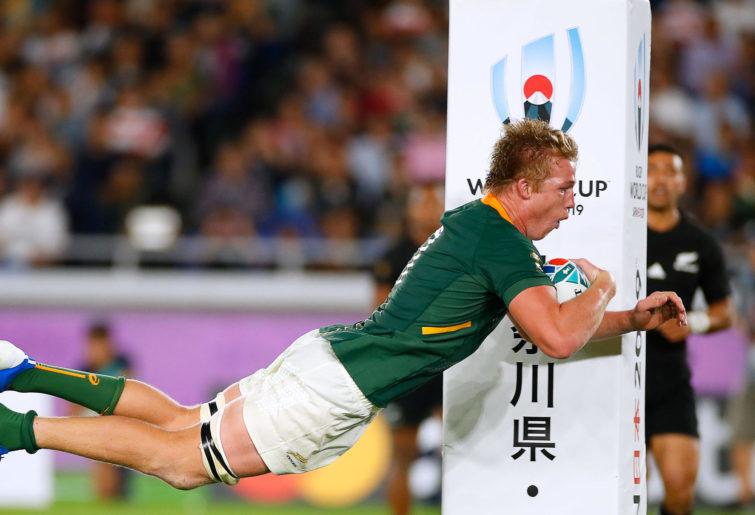 Given Coetzee covers the entire back row, I think he will get a bench spot with the bullocking Roos starting at 8. Louw will be there in the event PDST is injured or needs a rest – with Smith and Wiese for cover and the Springbok A games.

I like him but I don’t really see the role Fourie is going to play. Yes, he is an absolute breakdown pest but you also have Kwagga for that. Elstadt is supposed to cover lock and blind but with so many other players in the same mould I also don’t know his role. If it’s for Springbok A, then it would be better to get an additional lock such as Steenkamp and let Louw play that role.

Mostert has credit in the bank and will be on the pine. I wouldn’t however be surprised if for some matches Louw replaces him.

Faf is first pick, Jaden has great moments but tends to drift in and out of games, Herschel is coming back into some form at the right time but the person I would like to see given some time is Grant Williams. I suspect, however, that he is there as cover for Faf and Herschel until Reinach comes back from injury.

Handre has been down on confidence for some time and playing from the bench or at 12 for Montpellier hasn’t helped, which leaves Elton, who is currently also under a bit of a cloud due to a misdemeanour on an airplane.

Willemse can certainly cover if required but has been thriving at 12 for the Stormers, so we will need Pollard to get back to speed quickly with Elton covering.

As for Goosen, has the skills but a body of glass and hasn’t played in practically a season – his spot would have been better given to an up-and-comer such as Jordan Hendrikse. There, is of course, the stopgap that is Morne Steyn if really required, but I would hope we are past him now.

Another area where I think we will see little surprise in the first two Tests bar injury. DDA and Am will start and Esterhuizen and Kriel provide the cover. Given his form, I would like to see AE start a Test – probably the third Test against Wales, with Willemse the utility cover.

Again – there is really only one spot available. Pimps and Kolbe cover the wings – leaving fullback for I hope Gelant. Willie’s time is over and would be best served as a mentor or a steady hand in the A games. Lots of other great options here with Fassi in the squad covering wing and fullback and then players like Zas and Nkosi in line.

Damian will reprise Frans Steyn’s old role with excitement machine Kurt Lee getting some squad exposure. Another bolter could have been Canaan Moodie. Notable omission is the prop/howitzer/back that is Steyn, who is currently injured.