The Crusaders have won their 11th Super Rugby title with a dominant 21-7 victory over an out-gunned, outplayed and fumbling Blues.

On a cool, occasionally rainy Saturday night at Eden Park, the visitors dominated in all facets, most notably the lineout where they stole the ball eight times from Blues throw-ins, while not losing one on their own throw. If there was a tale of the tape, that was it.

Yet on all other statistical markers as well, the Crusaders owned the final.

“Right from the opening whistle, this Crusaders performance has been faultless,” former All Blacks and Crusaders No.9 Justin Marshall said on Stan Sport.

“They’ve won the breakdown, they’ve played in the right areas of the field, they struck when they needed to. It’s been a complete performance.”

Though the Blues threatened to make a game of it in the second half, it was only the margin that gave home fans hope. And when Sevu Reece latched onto an unlikely long grubber by moustachioed Argentine No.6 Pablo Matera, it was over.

At the anthem, the Blues held each other’s shorts as song-men with liquid larynxes did their thing, firecrackers shot into the sky, flames shot from geysers and smoke sat in the bowl of Eden Park like a thick fog on the Waikato River.

But in the first five minutes of the real stuff, it was all Crusaders. Big men, big contact.

Sam Whitelock, a tough and wise Kodiak bear, was typically ever-present, a major factor. His lock partner and captain Scott Barrett was a similar tower of doom. With No.8 Cullen Grace and Matera, the ‘Saders had more timber than the Waipoua kauri forest.

Early doors, the Blues hit back out of their 22, only for the Crusaders to hit back at them from their own. The two best counter-attacking teams in the competition could counter-attack each other to death.

The Blues lost two lineouts on their own throw. See above, re. the big bear in the forest.

Richie Mo’unga landed a 40-metre field goal for something to do, opening the scoring in the 14th minute.

The Blues lost another lineout. David Havili launched a 50/22. And the red-and-blacks came like the rapids of the Tongariro.

Leicester Fainga’anuku strong-armed his way over the line, but referee Ben O’Keeffe didn’t see him do it and the video ones didn’t either.

The chances of anything coming from Mars were a million to one, they said. But still they came; the Crusaders, after all, are one of a handful of provincial sides in the world (the other three are Kiwis, too) without particular fear of Eden Park.

Two props come together, bent low at the waist – the blue one’s shoulder hit the red one’s head. No harm, no foul, according to the video men and O’Keefe.

Men have been sent off for the same. But the gods of rugby nodded: good call.

They nodded again when Jack Goodhue tackled Roger Tuivasa-Sheck, the former reeling back as if charged by a big feral pig. The video was analysed; Goodhue was deemed ‘upright’. The analysts looked at it many times, before deciding it was rugby.

No one wants to be sued, one surmises.

After 20 minutes, somehow, it was only 3-0 Crusaders. The Blues hit back with counter – they’re good at it. They won a lineout, then lost one – the big Kodiak bear plucking another one from the black Auckland skies.

“That tells you Sam Whitelock has their lineout calls figured out,” commentator Tony Johnson reckoned.

“He’s a professor in the lineout,” Justin Marshall agreed.

Still, they came again, these Crusaders, high skill at speed in the rain. Havili bunted for Mo’unga who regathered. Havili looped around, and won a penalty. Six-nil the visitors.

Then the Blues, under more pressure than for most of this season, lost another lineout.

“The lineout’s a disaster for the Blues,” Johnson declared; he wasn’t wrong. 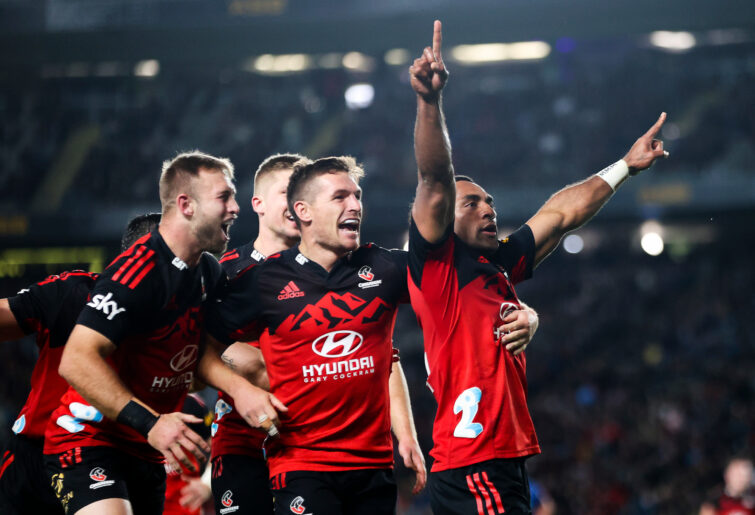 Sevu Reece of the Crusaders celebrates after scoring a try during the Super Rugby Pacific Final. (Photo by Phil Walter/Getty Images)

Beauden Barrett kicked a penalty kick into touch, his first involvement in an otherwise invisible first half.

The Crusaders sent waves of big bodies at the Blues’ line. Their smallest man, halfback Bryn Hall, scored a try with millimetres to spare from the base of a ruck.

After all that, at half-time it was 13-0, the first time the Blues had been kept scoreless in a half of rugby since 2015. In the Super final. At Eden Park.

Of course, it was against the Crusaders, who haven’t lost a final since 2016 in South Africa.

The second half began where the first one left off – the Blues lost a lineout. It had become a thing. Blues hooker Kurt Eklund looked almost yippy, like a nervy putter.

The Blues hooked a lock and Tuivasa-Sheck; neither looked injured. Perhaps they thought Bryce Heem was more likely to have an impact.

Mo’unga landed a penalty goal. The Blues lost another lineout. Phases rained. The Blues were good in defence. Somehow they held on.

There were 29 minutes to play. The Crusaders hadn’t used anyone on the bench.

Beauden Barrett kicked another penalty into touch, still more anonymous than an American on Twitter called Grant Nisbet. The Blues replaced their lineout thrower, but still lost yet another lineout on their throw. That made it seven.

The worm turned – a charge-down put half the Blues’ forward pack onside. There followed several phases of attack.
Flame-haired nine Finlay Christie scrapped for the pill at the back of a scrum, and ran five metres to score.

It should not have been, not with all the play against them – but the Blues trailed only by nine.

The Crusaders emptied their bench, conotinuing to squeeze and pressure the desperate Blues. Matera and Reece ripped off their party trick with five minutes to go. And that was that.

Yet it had already been over for 75 minutes. The Blues were never in it.

If there was a turning point, it was kick-off.