Canberra have pulled off a dramatic late escape to avoid another horrendous defeat, scoring late to avert disaster against Newcastle.

They won 20-18 in the end after a solo try from Hudson Young, having led 14-0 and then conceded 18 points to trail with two minutes to play.

The ‘Faders’ tag was thought to be a thing of the past after recent wins over the Roosters, Rabbitohs and Sharks, but it returned with a vengeance here: this would have been the ninth time times after leading by double figures since the start of 2021.

It was also Young who saved them from a double-digit turnaround in Round 1, when they blew a 12-point lead against Cronulla.

The dominance that the Raiders enjoyed early on was near-total, as was their capitulation: when Xavier Savage scored to put them 14-0 ahead, they were completing at above 90%, but for the rest of the game, they would go closer to 50%. 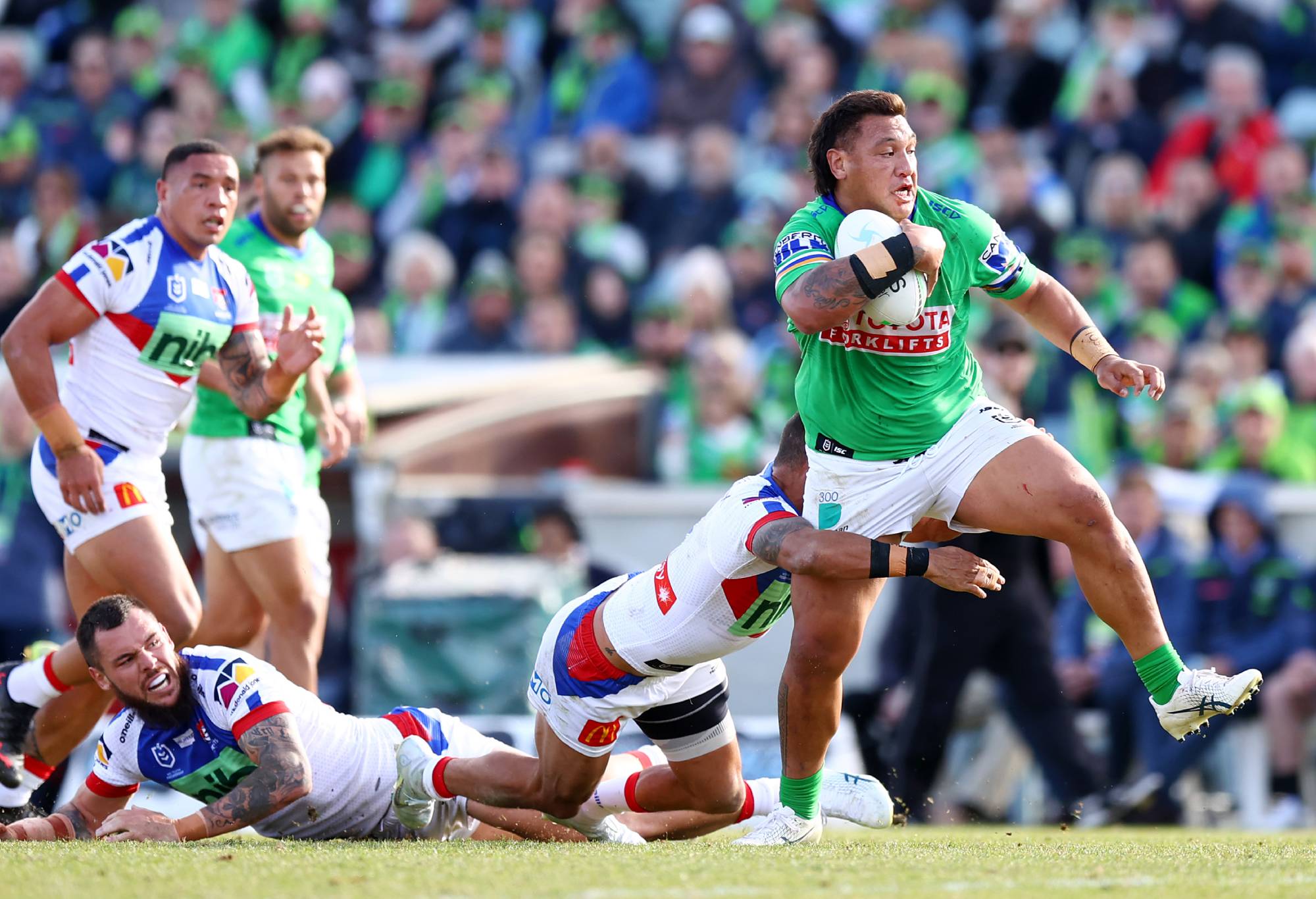 Knights coach Adam O’Brien revealed after the game that captain Kalyn Ponga nearly did not play.

“He’s had a gastro thing. I was confident he was on top of it this morning but he couldn’t eat. He wasn’t in a good way and I could tell it was going to be a real ask for him. Kalyn being Kalyn, he needed to be out there,” O’Brien said.

“He hasn’t eaten for a few days. There’s not much of him as there is. He’s just gassed at the moment. He doesn’t get a lot of raps for his toughness, Kalyn, there are people who want to get stuck into him a bit. I know and we know, the club and the players know what we’ve got with him. I wouldn’t swap him for anyone.”

Newcastle never contained the Raiders through the middle – Josh Papali’i and Joseph Tapine dominated, combining for nearly 400m between them – and contributed heavily to their own downfall with relieving yardage penalties.

The Knights lost the territory battle comprehensively and repeatedly struggled to build pressure. They also lost Tyson Frizell to a HIA – putting any lingering hopes of Origin participation in doubt – and in truth, only David Klemmer, Mitch Barnett and Ponga emerged with any great credit.

For Ricky Stuart, he didn’t know what to think when Young went on his own to put boot to ball in the dying stages but was thrilled it worked out well.

“I love coaching Hudson. He gets a bad rap for the way he plays. A lot of people think he’s an angry man and whatnot, that couldn’t be further from the truth,” he said.

“He is a competitor, he’s always in your face, and he loves his footy. He’s one of those guys who loves to read about the footy, loves to read about other teams and other players. He’s a very passionate kid about rugby league. I’m happy for him at the moment because he is playing good footy.”

Newcastle were on the back foot from the first whistle and if anything, it was surprising that it took 10 minutes for the Raiders to score.

When they did, it was terribly simple. Canberra spread to the left and isolated Nick Cotric against Dom Young, and the Englishman’s tackling let him down to concede the first. Young’s attempt wasn’t great, but Enari Tuala’s for the next score was even worse.

Canberra had barely left the Newcastle end – Ponga had denied Horsburgh, and a post had saved them after a Fogarty kick – before Matt Timoko was able to stroll through some incredibly soft tackling from the centre.

Savage might have had one, but missed a kick completely on the ground. When the Raiders went to the air he had more luck, coming down with the ball over the top of Dane Gagai to make it 14-0.

Ponga was able to dart from dummy half close to the line and put Kurt Mann through a gap to cut the gap to eight.

Even with a team as down on their luck as Newcastle, Canberra were offering too many chances. Elliott Whitehead was sin binned for a late tackle on Ponga and from the next set, the fullback threaded a kick behind that Mat Croker reached first.

The Knights were on a roll even when Whitehead returned. Adam Clune put Mitch Barnett through a gap, got the ball back and he moved it to Edrick Lee, who fought off Savage to put Newcastle ahead for the first time.

Savage was out of position for a Clune kick that threatened a 40/20, and as he scuttled across to try to keep it in, he lost the ball. Lee picked up and scored, but the fullback was reprieved by a knock-on.

Anthony Milford then rolled back the years with a chip and chase that ended up with the ball in the hands of David Klemmer, who kicked again, finding Clune, who kicked a third time, before Tapine got to the ball and somehow made it back into the field of play.

His effort would be rewarded. The Raiders managed to go the length of the field, assisted again by a Knights penalty, with Young kicking into the backfield to score a wholly undeserved but ultimately decisive win.