AFL takeaways: How your club fared in Round 14

Round 14 started with a game that was relatively entertaining between the Blues and the Tigers.

At halftime, the Blues trailed by 25 points, but they fought back in the second half and in the end, they couldn’t get the chocolates. Unfortunately, the dominance of the Tigers system meant they had many more inside 50s and that got them over the line.

The second game of the round was a game in honour of the great Saint Danny ‘Spud’ Frawley. The game was one that the Saints were expected to win, but the Bombers were the team with the hunger and team spirit.

On Saturday there were three games, with one of the highlights Tom Hawkins kicking his 700th goal. The Power showed plenty of character in their win against the Swans, while the Eagles celebrated their 20-year premiership reunion and the players did their fans proud, as they were competitive against the Cats.

The highlight was the Giants-Bulldogs first half, where the number of goals scored in a first half this season equalled the season high of 19 goals. Despite that, the half wasn’t one-sided as the Bulldogs led by five points at halftime. The Bulldogs put in a good display, despite the Giants playing with attacking flair!

Both the Power and Giants were forced to play a makeshift ruck combination due to injuries, with the Power winning and the Giants losing by 20 points. Even though both teams were forced into making those changes, it shows that it doesn’t harm to throw the magnets around.

Last but not least, the Suns showed a great amount of resolve to defeat a Crows team that is building something. The Suns have flourished in season 2022 and should play finals for the first time, thanks to the game plan implemented by Stuart Dew and executed by the players.

There was plenty for all 12 teams to take away from Round 14, which was the last of the three bye rounds in season 2022.

Adelaide Crows: A work in progress

The Crows fought throughout the four quarters, but lost the second and fourth quarters by a combined total of 52 points. In the end, losing the territory battle meant that they lost the inside 50s by 18, which showed that they lost the game deservedly.

There were individual performances that were positive too; Rory Laird had 42 disposals, Jordan Dawson had 32 disposals and a goal. Along with that, Matt Crouch and youngster Sam Berry finished with 19 clearances combined out of the Crows 39 clearances.

The Blues lost their Round 14 game to the Tigers, deservedly so; the Blues had 25 fewer inside 50s than the Tigers.

Despite that, the Blues only had five fewer scoring shots than the Tigers and Carlton were fortunate to get within eight points in the fourth quarter, but it is a game of inches and Harry McKay had an opportunity to make the deficit under two goals late in the game, but missed the set shot.

The few positives: they never gave up, in particular Sam Docherty and Adam Saad who took the game on and Harry McKay who kicked four goals! They didn’t lose due to missing players through injuries, but due to having fewer opportunities to score. 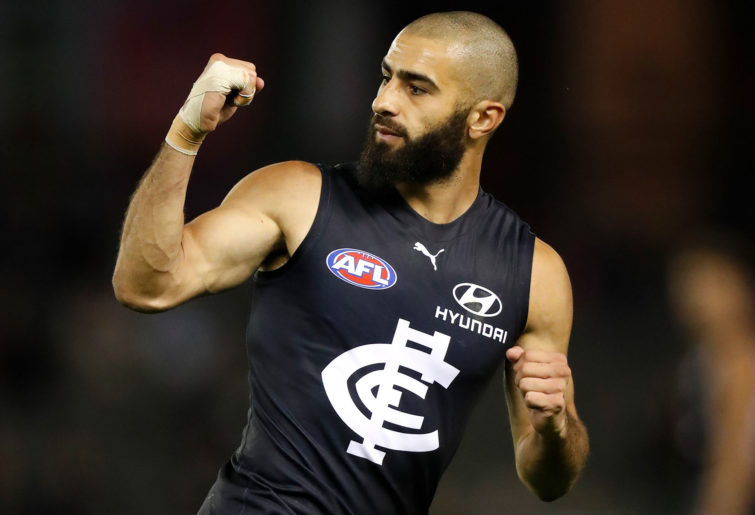 Essendon Bombers: It was as if it was a grand final

The Bombers put in a four-quarter display; their desperation and execution of the game plan showed that they have plenty of potential. It was a performance that should boost the morale of the club, their staff, players and everyone associated with it.

The honesty of coach Ben Rutten after their loss to the Blues regarding Jake Stringer having a poor game was refreshing as it was open and honest, but not malicious. Stringer responded and performed well in Round 14.

There were others that were instrumental in the win: Dylan Shiel was relentless, while Peter Wright kicked four goals and Nick Hind took the game on!

Geelong Cats: They got a wake-up call

The Cats didn’t perform well for the majority of the game, but in the end, they were too good. The scores were level at halftime!

There’s no doubt that they weren’t playing to their optimum level and they were fortunate to get the four points. Tyson Stengle displayed footy smarts, kicking three goals and ultimately making the team better, while Sam Menegola kicked two goals in his first game for the season.

The disappointing display by the Cats should be a motivator!

Gold Coast Suns: The Suns clinical, they can reach the pinnacle (finals)

The Suns started the game slowly, with just one goal at quarter time. In the next three quarters they kicked 17 goals!

They took their opportunities when they were given them. There’s no disputing the Crows put up a good fight and the 43-point win for the Suns flattered them, according to co-captain Jarrod Witts.

Unfortunately, the win came at a cost with Wil Powell was stretchered off the ground in the third quarter, which made the Suns a little flat for a period of time. They allowed the Crows back into the game, but in the end, the Suns’ class shone through.

The Giants were forced to play with a makeshift ruck combination for the majority of the game as they had to make a late change due to Matt Flynn having a quad injury and Braydon Preuss being subbed out relatively early due to an ankle injury.

The combination of Lachlan Keefe and Harry Himmelberg did a good job to keep the Giants competitive.

They made it three of the four games that Mark McVeigh has coached where they have scored over 100 points, with their lowest score in the four games 96 points against the Lions! They’re not scared to take the game on; they play without fear.

They are an exciting team to watch, because they are willing to risk turning the ball over to open up the corridor. Despite losing the game, Toby Greene was a shining light with a career-high seven goals and his namesake Tom Green had 32 disposals, as did Stephen Coniglio, who also kicked two goals and led from the front.

The shackles have been taken off and their games are now entertaining from a neutral perspective.

The Power had everyone play their role. Even their sub, Xavier Duursma, made a solid contribution. They were forced to play with a makeshift ruck combination after Brynn Teakle hurt his collarbone in the second quarter, which meant that they were forced to go with the combination of Jeremy Finlayson and Charlie Dixon. They also lost Zak Butters due to a knee injury. 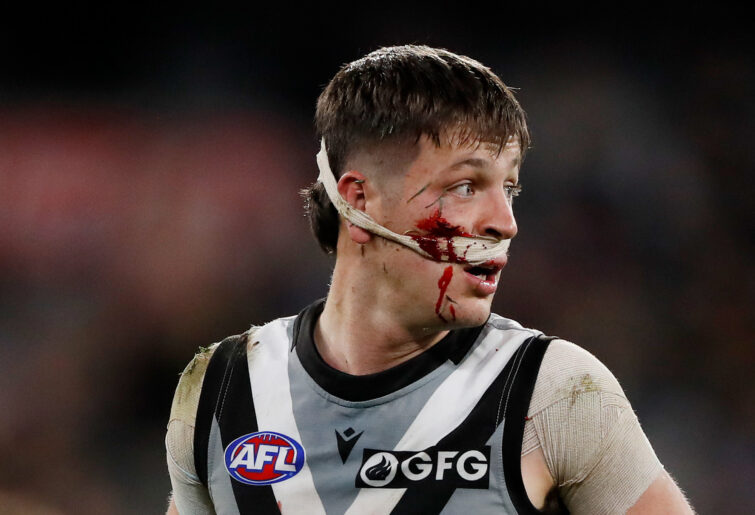 In Ken Hinkley’s halftime interview, he believed that it would be one of the Power’s best wins and it was prophetic. They were far too good for the Swans in the premiership quarter, with every piece of the Power team playing well.

Richmond Tigers: They know how to get the four points

The Tigers played in a fashion that footy fans have become accustomed to, as they took the game on and put plenty of pressure on the Blues. There’s no disputing they should’ve put the game beyond doubt at halftime, but that’s not what came to fruition.

There’s plenty of work for them to do, but they won the game as they dominated inside 50s and therefore it put the Blues under too much pressure and they got the four points.

The Saints’ movement of the ball into the forward 50 was Max King or bust. Once again, Tim Membrey was thrown behind the ball for some reason, but he was clearly missed in the forward 50.

It’s disappointing that they only had one period of the game where they took the game on; they kicked five goals in a row in the first part of the third quarter. There was Jade Gresham who was a shining light with three goals, while Jack Sinclair worked hard with 31 disposals.

They should’ve lost by more than 35 points as they had just 17 scoring shots to the Bombers’ 32. The Saints game plan needs a shift as they were completely outplayed by the Bombers.

Sydney Swans: After the opening three goals, everything went wrong

The Swans started the game extremely well, but following kicking the first three goals of the first quarter, the Power kicked 12 of the next 17 goals for the game. It was the Swans’ lack of resilience and the fact that they looked devoid of a viable game plan which would be the biggest worry for John Longmire and his coaching staff.

West Coast Eagles: That’s the standard we should come to expect

The Eagles performed well as they were extremely competitive and they executed the game plan pretty well. They did well to go into the halftime break with the scores level.

There’s no doubt that they will be satisfied with their endeavour as it showed that there are positives for them to take from the game. They stepped up and stayed within striking distance on the scoreboard for the game until the Cats’ class shone through to give them a narrow win.

It was great to see a collective team effort from the Eagles.

Western Bulldogs: Back to their brand

The Bulldogs may have not been at their best, but it was a hard-fought win against a Giants team who played with dare and flair. The Bulldogs had 10 different goal kickers, despite Aaron Naughton and Cody Weightman collectively kicking 10 of the Bulldogs’ 19 goals.

The game was in the balance at halftime, but the Bulldogs played well when they had to in the premiership quarter where they kicked six goals to the Giants’ two. The Bulldogs made it four of their last five games where they’ve scored 99 points or more, with a total of 125 points in Round 14.

There’s work that they can do to improve the defensive side of their game, but the attacking aspect of their game appears to be in sync.