Wallabies lock Will Skelton has made history, becoming the first player to be red carded while playing for Barbarians.

The French-based Skelton was sent off in the Baa Baas’ astonishing 52-21 win over an England squad preparing to tour Australia next month.

Skelton became the first player in the Barbarians’ 132-year history to get his marching orders, after his shoulder to the head of Patrick Schickerling in the 37th minute forced the Exeter prop out of the match over a failed head injury assessment.

Skelton was sent off after Schickerling had knocked the ball on around England’s 22 and the La Rochelle second-row shouldered the prop carelessly.

Officials ruled it was a sending off because the 2.03m-tall, 140kg Skelton had time to avoid the collision and didn’t use his arms on Schickerling, who hadn’t actually been in possession of the ball anyway.

On Monday, the Sydney Morning Herald reported that Skelton was in the frame to join the Wallabies for the Rugby Championship, after missing out on the England series due to eligibility criteria. 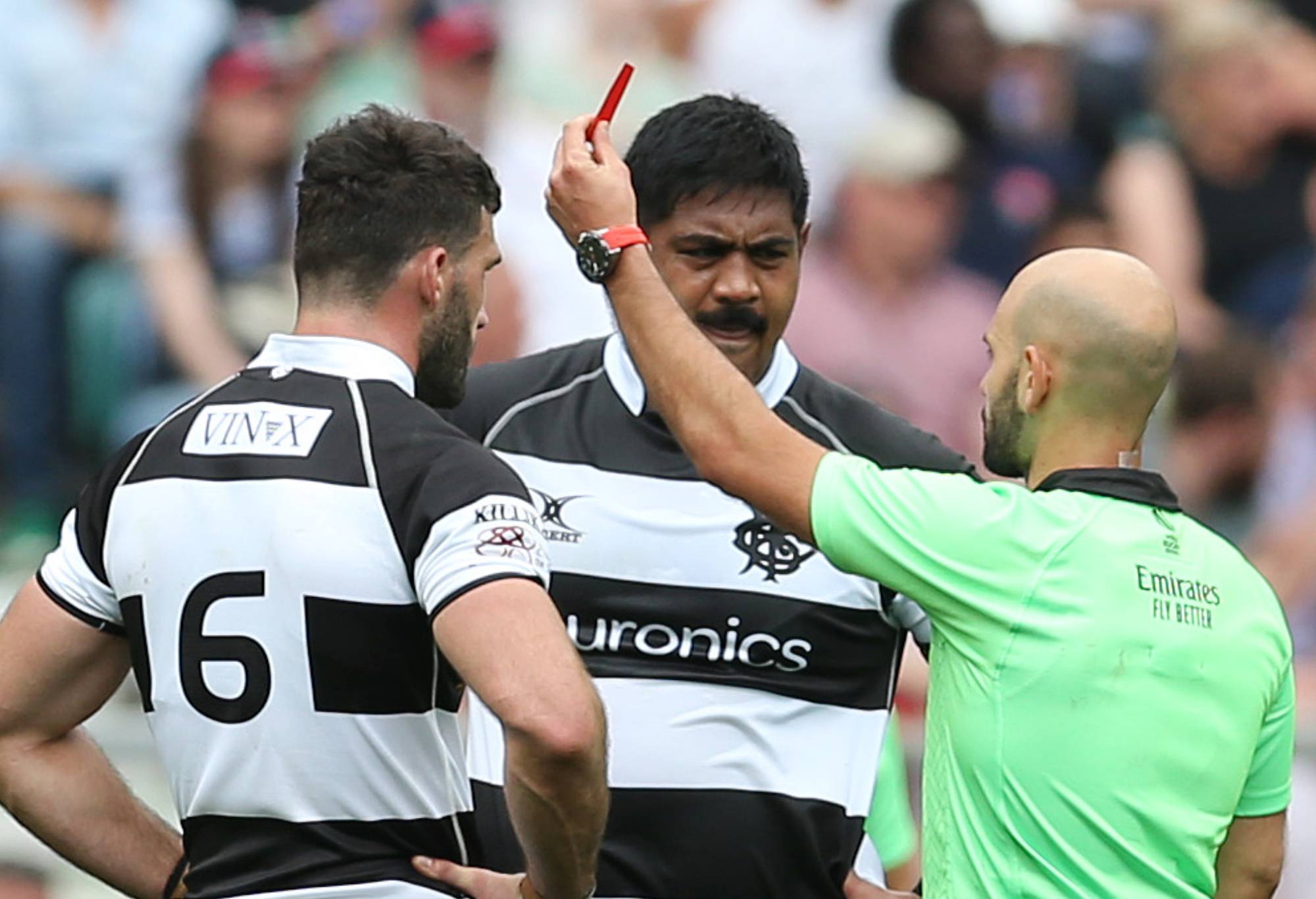 Will Skelton of Barbarians is shown a red card by referee, Andrea Piardi d. (Photo by Steve Bardens/Getty Images for Barbarians)

Eddie Jones had put some youthful faces into the fray but, even given the experimental feel to the line-up, the defeat was a fairly humiliating one – their biggest defeat to the Baa Baas.

The Barbarians racked up eight tries in total.

Former England lock George Kruis bowed out from the game in comical style – converting three tries, including one while facing the wrong way as he backheeled the ball over the crossbar and between the posts.

As a mark of respect for former Wales great Phil Bennett, who died last Sunday, the Barbarians players formed the number 10 before a minute’s applause for the man who initiated the Baa Baas’ legendary score against the All Blacks in 1973.

Jones, while playing down the significance of the loss, was still forced to concede: “We were beaten pretty badly at the breakdown, so it’s a good reminder of how much work we have to do before Australia.”

Jones was riled up by questions.

“No one is happy about the result but, again, we look at it in the light of what we’re trying to do.

“There’s a contextual situation here. I know you’re struggling to understand it, but we’re trying to build a new team, play a different way, a style that suits that players and there are going to be some ups and downs.”

Cheika tips Petaia for No.15

Former Wallabies coach Michael Cheika, now at the helm of Argentina, says he would like to see Jordan Petaia used at fullback against England.

Speaking on Sports Sunday, Cheika praised Dave Rennie’s 35-man squad as having good depth. The No.15 jersey is one causing plenty of debate with Tom Banks leaving for Japan after this season, and Petaia having been used sparingly at 15 by Queensland despite Rennie saying that is where he would prefer him to play.

“Banks is the incumbent – he hasn’t really ever arrived in that position,” Cheika said. “[Andrew] Kellaway’s a bit of a new kid on the block.

“I’m a big Jordan Petaia fan. At 15 he gives you something a bit different. Great in the air , and if he can build his kicking game, he’s got X factor as well, he can deliver something from the back.”

Asked if he thought Petaia was ready to play fullback at Test level, Cheika replied: “He never will be if he doesn’t get a chance. If the coach sees that there’s the opportunity for him then getting these Test matches a year and half out from the World Cup is essential.”

Cheika was also asked if he thought Suliasi Vunivalu was worth a go now or if he was picked with an eye on the future.

“A bit of both,” said Cheika. “The guy’s obviously an X Factor player. In the big Test matches those players who can create something out of nothing are the guys who can win you a game on one play.

“Vunivalu is that guy. He hasn’t had a lot of continuity around playing with some injuries but I think it’s a worthwhile punt by the coach.”

McLennan’s statement that “all bets were off” in terms of the competition from 2024 onwards, provoked an angry response from the trio on the The Breakdown.

“I think it’s all talk,” Muliaina said. “I’m disappointed too.
“Purely for that fact that we spoke about Moana and the Drua….they finally get into a competition and Hamish comes out and says we’re going to leave them.

“He’s the only one who thinks it’s going to happen. Even the Australian players [don’t]. We need each other.

“This competition has been so great and to hear stuff like that come out in the week of the final. That is just crap.”

Kirwan said leaving Super Rugby would be “the dumbest political decision they [Rugby Australia] could make”.

“Is this about money? The way I read it he wants a bit of our money, Sky money that we pay the New Zealand Rugby Union,” Kirwan said.

“But I’m going, ‘Hey, don’t you have to go and do your own television deal’?”

Rugby Australia’s television deal with Nine/Stan is worth a significant amount less than NZ Rugby’s deal.

There is a school of thought that focussing on local games would drive better TV outcomes for Australian franchises.

Wilson said that New Zealand and Australia “needed each other”.

“I think this is just a pure power play, in terms of trying to negotiate more funds for Australian rugby,” Wilson said.