Regardless the results, it has been another fantastic season of tipping. Plenty of rounds looked easy and just weren’t. Plenty more looked hard but produced absolutely no surprise at all.

Despite the Rugby Australia grenades thrown over the parapet in this last week, I’ve found Super Rugby Pacific to be a fantastic concept, and I’m sure it can only get better when played as a fully integrated competition.

But before we move onto the international part of the rugby year, we need to tie up Super Rugby Pacific in one, large, four-part bow.

So, for the last Super Rugby panel of 2022, I’ve asked the guys to outline some favourites of the season, namely:

Thanks once again, it’s been a great year of tipping chat – and that’s because the panel rip in every week and you guys get into it so well.

Congrats to Geoff for another Super Rugby tipping panel title, and the complete lack of prestige that comes with it.

We can’t wait to get into the Tests!

Geoff
The penultimate year of Super Rugby has drawn to a close, with a flurry of action: Brett and Harry battling over the tipping wooden spoon, David Havili beating this own modest form and Pablo Matera beating the hangman’s noose to become stars of the final, and Hamish McLennan doing relationship management the old-fashioned way – ‘take it or leave it’ via the media.

Players I loved watching the most this year included Rob Valetini, Will Jordan, Jed Holloway, Henry Time-Stowers, Timoci Tavatavanawai, Vinaya Habosi and Ardie Savea. And let’s face it, rugby wouldn’t be half as much fun without Nic White having a half-a-dozen sooks during a match. 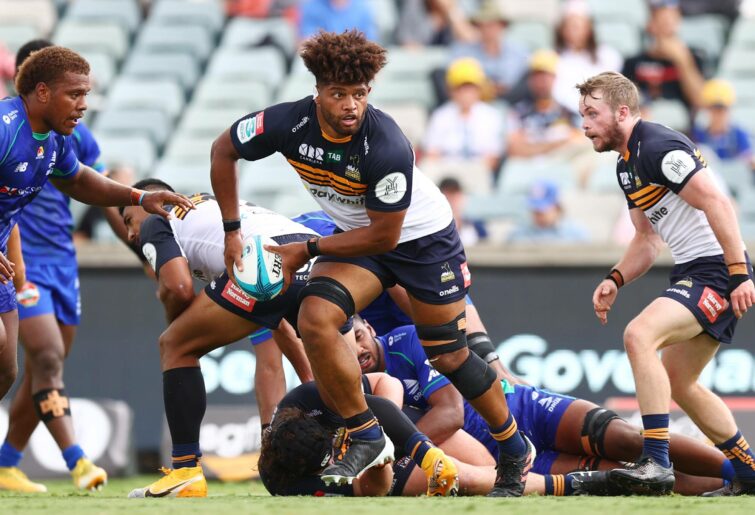 Robbie Valetini of the Brumbies (Photo by Mark Nolan/Getty Images)

Other players showed enough to put an asterisk against their name to watch for more development next year, with Josh Moorby, Rahboni Warren-Vosayaco, Tom Hooper and Fletcher Newell among them.

And I really enjoyed how Carter Gordon recovered from a disastrous opening night in Brisbane to suggest that he can take a big step forward for the Rebels, next year.

It’s clearly hard to go past Kalaveti Ravouvou for try of the year, but the one that really got me jumping out of my sofa was Ardie Savea’s match-winner on the bell, for the Hurricanes against the Blues back in Round 2.

Three of my best moments involve the new franchises: Moana Pasifika’s shock ’super time’ win against the Hurricanes, and the two Fijian home matches, in Suva against the Highlanders and Lautoka against the Chiefs.

Everyone involved with the carping between Australian and New Zealand rugby at the moment would do well to watch a replay of these matches, to remind themselves where the heart of rugby really lies.

But despite the fierce competition, the best moment of the year was surely a well-primed Andrew ‘Twiggy’ Forrest proclaiming to the world that the Western Force are on the “cusp of greatness”.

Nothing like setting new coach, Simon Cron, an easy benchmark right from the start!

Digger
Another season, another Crusaders title. Fels a bit like deja vu but then, can I really have come second after scoring a satisfying 69?

Will Jordan, Salesi Rayasi and Rob Valetini spring immediately to mind as favourites to watch, while Dylan Pietsch certainly is plenty of fun and appears to have the Midas touch. And, of course, Tom Robinson is a personal fave – I love that bloke.

But absolutely the player I was glued to watching and willing all of my energy through the television to see ball in hand was Vinaya Habosi of the Drua. He is an excitement machine and an absolute pleasure to watch with pace to burn. Something about the headband and moustache too, bringing a bit of retro and style back to the game.

Try of the year? Pick any by the Drua really, probably the standout was the 100m effort in the 69th minute against the Chiefs scored by Kalaveti Ravouvou, started off by my man Habosi (Greg Clark’s commentary certainly added to the moment).

For a best try under pressure, to Ardie Savea’s last-minute score against the Blues to cap off a stunning comeback of three tries in the last ten minutes to win that match earlier in the season is the winner.

My best moment of the year again has the Drua to thank, with the atmosphere in Suva and Lautoka, against the Highlanders and Chiefs, respectively.

The sheer passion and energy from the Fijian crowd really got the blood pumping and created such an enjoyable spectacle that it was easily the standout moment(s) of 2022.

Super Rugby may have 99 problems but playing in Fiji ain’t one! 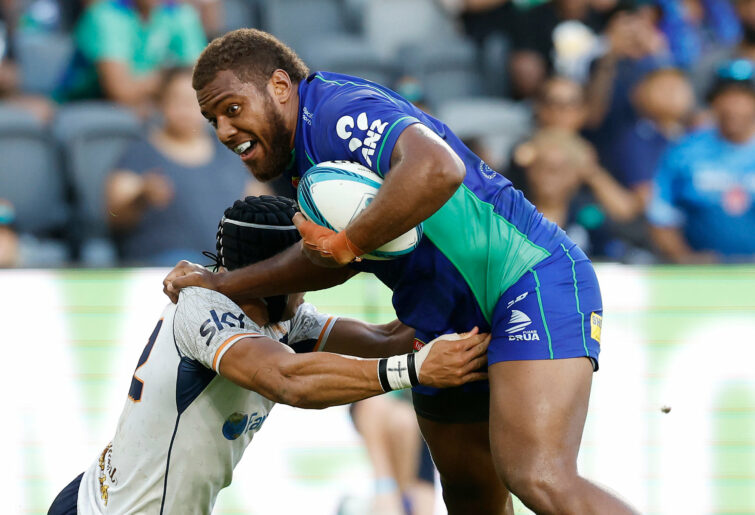 Brett
It was really great to see Waratahs No.8 Will Harris properly emerge as the player he’s been promising to become in the last few years, and there’s always something hypnotic about watching Beauden Barrett once the ball hits his hands.

But the Player I loved watching this year was Ardie Savea. So many times he seemed to drag the Hurricanes onto his sizable shoulders and put them into a position in a game they just couldn’t get to themselves. Sometimes it was the barnstorming play that go them back into games, other times he just went out and won games off his own back.

There’s a decent argument that I’m not even sure Hurricanes fans could disagree with, that Savea was the difference between the Canes playing finals this season and not. That’s how good his season was.

Try of the year is a tough pick. Anything involving Will Jordan has to be considered on principle, and Kalaveti Ravouvou’s length-of-the-field special in Lautoka will almost certainly win the official gong. I’ll give a mention to Pita Gus Sowakula’s brilliant hurdling effort that was so good, they changed the rules, and anyone who can score a set piece special from inside their own half like Tom Banks did against the Drua in Canberra gets a mention, as well.

Actually, that reminds me of Rob Valetini’s kick and chase and out-running Jackson Garden-Bachop to score, too.

But I’m going to settle on Dylan Pietsch’s brilliant finish in the corner of a brilliant Waratahs team try against the Hurricanes at Leichhardt Oval in Round 13. It started with what looked like an over-the-top speculator in centre-field from Rahboni Warren-Vosayaco but landed in Charlie Gamble’s grasp in clear air, he straightened and put Isaia Perese away down the left edge.

And Perese probably should have thrown the inboard pass earlier than he did, in the end drawing two Hurricanes into contact and somehow freeing the arm to get the flick pass to Pietsch trailing through on the inside. A brilliant finish to an opportunity that really did come from nothing.

For my best moment, I’m going to go a little bit left-field.

I keep coming back to the ridiculously close Round 11, in which the first five games were all decided by four points or fewer, before the Brumbies then upset the trend by giving the Hurricanes a 17-point touch-up.

At the time, I theorised that it might have been the closest round of Super Rugby ever played – I’ve not since tried to prove or disprove that – but regardless, it was the round in which we realised that the crossover section of Super Rugby Pacific was not going to be the cakewalk that plenty were more than willing to suggest it would be.

From that point, the race to the finals was well and truly on, and whatever comes of the current round of governing body sabre-rattling, the performances of the Australian teams this season has well and truly set things up for next season beautifully.

Harry
Howzit! Loved the panel’s clever chatter and also loved avoiding the wooden spoon, by the hair of my hairy chin.

It was a year of top number eights.

Cullen Grace down south stood tall. Harder than asphalt and bitumen. Smart, too. Hoskins Sotutu put his hand up, even if he fell at the last hurdle. Quality Super Rugby player in every way.

In Hamilton, Pita Gus Sowakula changed rugby laws with his athleticism, or at least forced World Rugby to clarify the guidelines. Ardie Savea may not be a proper No.8, but at this level, he was at times unplayably dominant.

Henry Time-Stowers for Moana Pasifika showcased what the advent of his new team can do for players who have never found their spot. He busted tackles all season long, even coming from slow ball. Workhorse and one of the most likable pod guests you’d ever find.

In Australia, Will Harris showed old-school linkman skills with loads of pace for his size. Pete Samu scored one of the best tries of the season. But it is Harry ‘Pants Not As Tight’ Wilson who ended up with the best No.8 of the season on a fading team. He carried over 200 times, about 50 more than the nearest heavy carrier, and scored remarkable tries.

Try of the year was Harry’s forearm behind the head. In an age of TMOs searching for vision and blades of grass and separation, here was the prototype of how to score in such a way that even TMOs giggle.

Moment of the year was Moana beating the Brumbies 32-22. It put the Pacific in Super Rugby: no gimmick. A win. A real win. It also foreshadowed what would happen in the finals.

Player I loved watching was Will Jordan because he is smooth as silk and tough as teak and as lucky as the casino boss.

Thanks so much for being involved in Super Rugby Pacific tipping in 2022 – we’ll be back in international mode next week!