The criteria for selection is:

– No representing at senior level: internationals, State of Origin, Prime Ministers XIII, City vs. Country or All Stars
– Current players are excluded
– Players are only eligible for the club they played the most first grade games for
– For players who straddle the 1970s and 1980’s, 30 games after since 1980 is generally the cut-off to qualify.

This is a pretty solid team, with plenty of first grade experience, although it probably reflects long years of missing finals and being ignored by selectors.

Levy was a dependable first grade fullback who played over 200 games for Balmain, Parramatta and finally Penrith. He just qualifies for Penrith by 103 matches to the Eels 87.

After two unsuccessful seasons at Balmain, Levy joined Parramatta in 1976 and was let go right before their premiership hat trick. He did play in the club’s 1976 and 1977 grand finals (including the replay).

In a bit of an error of judgement, he joined the struggling Panthers in 1981 and never played finals again. He should have played in the club’s first final in 1985, but was left on the bench in his final match before retirement.

Levy was a reliable goal kicker and scored 330 points for the club across his 5 seasons. He later became the CEO of the Panthers.

Greene played nearly 50 first grade matches for Wests and then Easts, before joining the Panthers in 1986. Over the next seven seasons, Greene alternated between playing 20 matches or less than 7. In 1988, Greene topped the club’s try-scoring list.

Luckily for him another of his good seasons was 1990, where he was fullback as the club played in their first grand final, losing to Canberra. Greene had only moved from the wing in round 15 that year.

‘Speedy’ Gonzales (of course) played four seasons for the Panthers in the mid 1980’s before joining the Gold Coast for their entry into the NSWRL in 1988. He played 131 first grade matches across both clubs.

Gonzales had his best season for Penrith in 1985 when they made their first finals appearance. The winger played in all but one match for the season and scored 11 tries.

Ben’s son Blayze played for the Tweed Heads Seagulls in the Queensland Cup and represented the Philippines at international level.

Bentley was a Panthers favourite who played in their 1990 and 1991 grand final teams. The centre spent seven seasons with the Panthers where his defensive prowess was a vital part of the team as they experienced their first great period. He was actually subbed off for Brad Izzard before half time in the club’s 1991 grand final victory.

Since retirement Bentley has served on the NRL judiciary and was a board member at the Panthers.

This spot would have easily gone to “The Penguin’ Graeme Bradley, but I found out he actually played rep footy for a side called the Presidents XIII who played (and beat) a touring Great Britain side in 1988. Instead, we have 100 gamer Ken Wolffe.

Wolffe played as a winger and then centre for Penrith for 8 seasons before short stint with Parramatta. He played in one final game with the Panthers in 1985, unfortunately flogged by Parramatta.

Wolffe is currently an assistant principal at Delaney College Granville and was an Australian Schoolboys selector.

According to Rugby League Project: “In 1980, Wolffe sang Blue Bayou on Track 3 on the First Half of Tooth Hotels Presents Footy Favourites.”

Burns played for six clubs across the NRL and English Super League but played most games for the Panthers between 2010 and 2012.

He actually debuted for Manly against Penrith in 2005 and was their Rookie of the Year in 2006. He left Manly for the Cowboys looking for regular first grade, but moved back to Sydney with the Panthers in 2010.

Burns enjoyed three decent seasons at Penrith including their 2010 finals campaign. Burns copped a 12-match suspension in 2012 for a high tackle on the Roosters’ Martin Kennedy and left for England.

Burns played for four years in the England Super League for Hull Kingston Rovers and then St Helens, where he had a reunion with Penrith scrumbase partner Luke Walsh.

After returning to Australia, Burns played for Wynnum Manly in the QLD Cup and then returned to his home town, playing for the Clifton-Allora Wattles before coaching at the club. 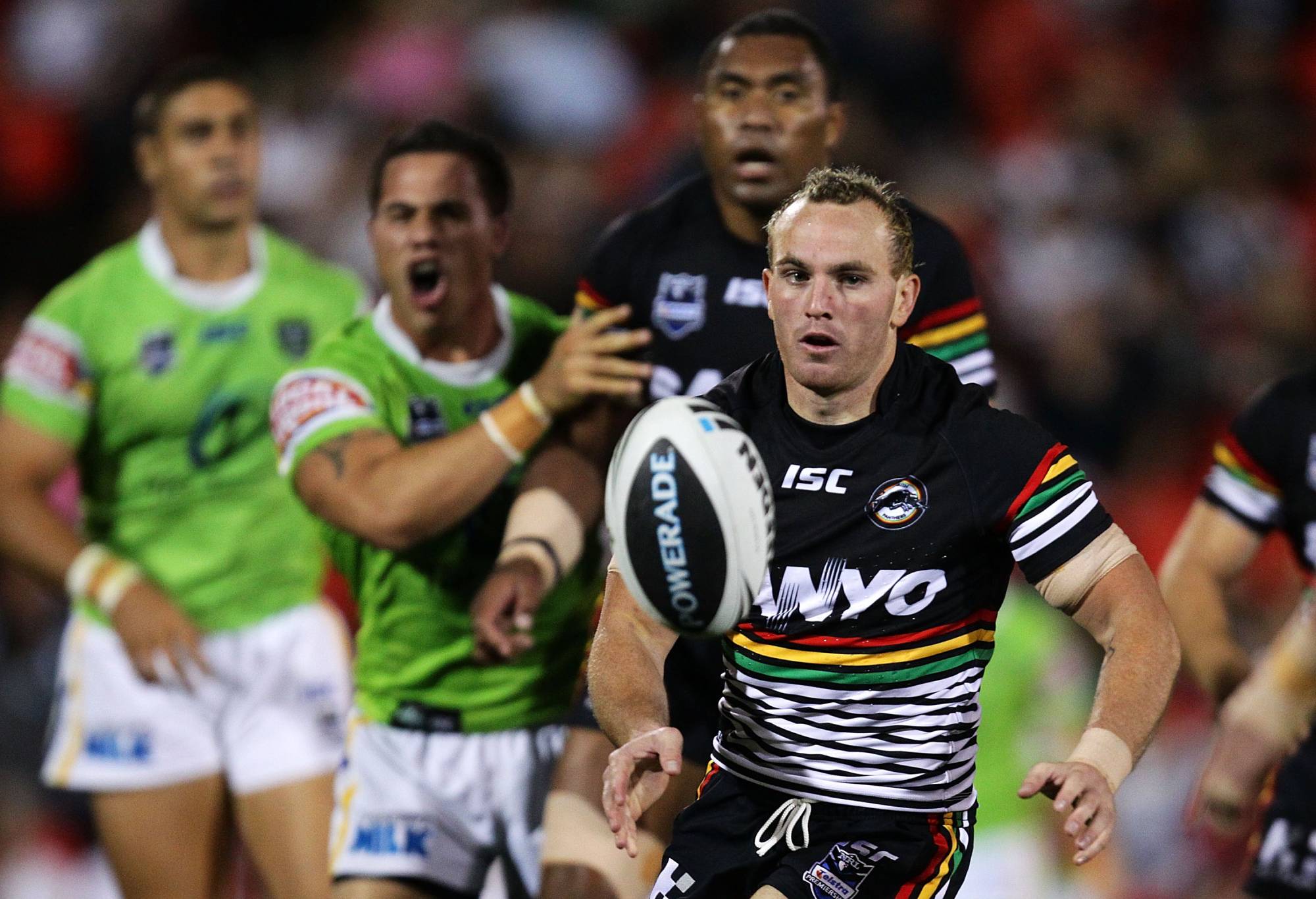 Luke Walsh passes for the Penrith Panthers in 2011. (Photo by Matt King/Getty Images)

Burns’ sometime halves partner Luke Walsh came into first grade in 2007 with Newcastle in the shadow of Andrew Johns.

He played a handful of games in three seasons for the Knights before a five-year stint with Penrith where he played over 100 games and appeared in their 2010 finals series, including being named the Players’ Player of the season in 2011.

After leaving Penrith, Walsh played three seasons with St Helens and a further two with Catalans in the English Super League.

Walsh returned to Newcastle and played in the local league for Western Suburbs Rosellas, where he was the competition’s Player of the Year in 2019 and club captain as they won the premiership.

Walsh was a prolific goal kicker, striking at 81.5% accuracy in the NRL and scoring nearly 1,000 career points across the NRL and ESL.

Nathan Smith had an aborted start to his first grade career with Canberra in 2004, playing just seven matches, although he did score a try from the bench in the club’s Qualifying Final loss to the Roosters in 2004. Smith then disappeared from view until signing with the Panthers in 2007.

He played the next seven seasons at the club, including in their 2010 finals campaign. This was after signing with Canberra for 2009 and changing his mind, resulting in an unsuccessful legal challenge by the Raiders.

After finishing his first grade career, Smith played NSW Cup for the club and then a few seasons for St Mary’s Saints in the Ron Massey Cup, winning premierships at both levels. Since 2019, he has written articles for league website nothingbutleague.com.

This Panthers legend is probably more famous for his colourful life in business post rugby league, but he did play well over 100 games for the club during the 1980’s. He also appeared in the club’s 1985 finals campaign. With these two in the second row at least there will be plenty of tackles made.

As of 2021 Zivanovic has married his fifth wife, been bankrupt and made millions, all after being born in a refugee camp in Italy after his parents fled Yugoslavia and spending four years in an orphanage in Sydney.

Walker was a one-club player for Penrith between 1988 and 1996. Walker’s debut coincided with a great period for the club and he played in consecutive finals series between 1989 and 1991, culminating in their maiden grand final victory over Canberra.

He said of the occasion: “To be a part of the history here at the Panthers and of the first team to make and then win a GF is a proud feeling and the party we had after winning certainly went on for a couple of weeks. The bond with my fellow teammates will last forever.”

Walker got caught up some controversy late in his career, being one of a dozen Panthers who signed an ARL contract before Penrith elected to go over to Super League. The players paid back their ARL signing fees and stayed with their club, resulting in the ARL taking them to court for breach of contract.

MacNamara was another one-club stalwart, the local junior playing a whopping 181 games for the Panthers over an 11-year career, the most in this side. He was just a rookie in 1991 and was not in the first grade team that won a maiden premiership for the club.

MacNamara played for a decade as the club failed to replicate their success of the early 1990’s. He played in two finals series, in 1997 and 2000 and was the club’s Player of the Year in 1996. MacNamara was made a life member of the club in 2017.

I had done a full bio of Kevin Kingston before I found he had represented the PM’s XIII, so instead we have Danny Farrar who played six seasons with the Panthers in the 1990s.

Farrar was the club’s first choice hooker from 1993 and closed out his time with the Panthers as part of their 1997 Super League finals team, defeating Canterbury but then going down to Canberra. In 1994 he was named in the Kangaroo’s training squad before missing final selection.

In 1998 Farrar joined Warrington in the Super League and captained the club for three seasons.

Danny Farrar got the nod over his long-time rival Brett Boyd, purely because Farrar started in the 1997 finals series, with Boyd on the bench. So we will keep to that formula here.

Brett Boyd played a season with Canberra in 1991, appearing through the finals series from the bench but not getting on in the grand final, lost to Penrith. He then jumped ship to the winning team and spent seven seasons with the Panthers, vying with Farrar for the starting hooker position. He left in 1999 to join North Queensland for a couple of seasons before retiring.

Outside back Shane Elford played for Penrith in two stints across a career spanning 13 seasons and 4 clubs. Elford started with Penrith in 1997, playing 69 first grade games in seven seasons but missing out on the 2003 grand final, before joining the Wests Tigers.

After three seasons with the Tigers, including a premiership in 2005, Elford headed over for the traditional English semi-retirement with Huddersfield. However after two seasons there he was enticed back to the Panthers and played another 20 games in 2009-2010 and captained the club in his final NRL game.

Elford is still employed by the Panthers as a Welfare Education Officer.

Five eighth Greg Clements was a mainstay for the Panthers during the 1980s, retiring just before the club reached its first grand final. He played in the club’s first ever final in 1985 and was the first choice number 6 in 1986 and 1987. He was relegated to the bench during 1988 and only played one match in 1989 as a fill-in before retiring.

After leaving Penrith, Clements represented NSW Country, won premierships on the Central Coast with the Erina Eagles and then for Cowra Magpies, and remained active as a long-time coach at the latter club.

Coaching from the bench will be Tim Sheens. Before he was a multiple premiership-winning coach, Sheens was a tough ball-playing forward for the Panthers over a 10-year first grade career. Despite mainly playing in the 1970s, his 52 matches since 1980 make him eligible here, as a leader at the club as it developed through a decade of hard knocks.