With all the top-eight teams playing against each other in Round 15, I thought it would be fun to look back at what have been some of the best games of 2022.

Sydney 112-GWS 92, Round 1
The Sydney rivalry is strong, magnified by the fact they’ve played against each other in big finals, including last year’s elimination final.

Sydney prevailed by 20 points in a high-scoring game that still had plenty of tackle pressure.

Luke Parker was awarded the Brett Kirk medal for the fourth time with five goals and 21 touches.

He snagged it on the three-quarter-time siren to set the crowd into ruptures.

Goalless in the second quarter, he kicked goal 998 mid-way through the third stanza and with just a couple of minutes until three-quarter time, he bombed a trademark goal from outside 50.

With the Swans in control, the game was in anticlimactic territory but no one was leaving as Buddy slotted his thousandth.

The game turned into pandemonium as fans flooded the ground. 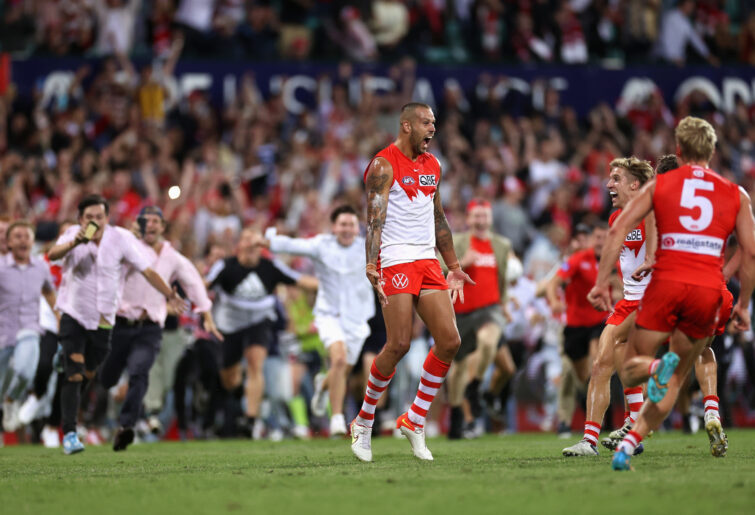 Adelaide 96-Port Adelaide 92, Round 3
Showdowns always deliver – wherever the teams are on the ladder, they produce a classic.

It looked for the majority of this game that the Power would register their first win of the year. However, when Elliot Himmelberg kicked his fourth goal, which bought the margin to under a goal, something was going to happen.

Sam Mayes gave away a free kick in the dying seconds providing Adelaide with the chance to win the game after the siren. A further controversial moment saw Lachie Murphy, who was awarded the free kick, deemed unable to take it. Instead, it was Jordan Dawson, Adelaide’s best kick, who swung it back through to break Power fans’ hearts.

Collingwood 79-Carlton 75, Round 11
Jacob Weitering going down for Carlton was a big blow. Regardless, they still led at halftime largely due to accurate kicking at goal.

Collingwood bounced back to hold an 11-point lead going into the last and Ollie Henry looked to be the hero, kicking two last-quarter goals, the latter putting his side up by 23 points.

But Carlton kept coming. A goal by Matthew Owies gave them a flicker of hope, before big Charlie Curnow sent one through from outside 50.

Immediately after, he took a mark, lost his man and ran into the open goal to slam it through.

The margin was suddenly five points and the rain was coming down.

Fortunately for Pies fans, his kick went wide and Collingwood held on to win by four points.

Geelong 104-Collingwood 91, Round 3
This game had everything you could want, highlighted by big momentum swings.

Collingwood started off the better but couldn’t capitalise on their good work due to poor conversion, seeing Geelong take a five-point lead into halftime.

The Pies’ inaccuracy didn’t trouble them in the third quarter, booting nine goals to one and opening up a 37-point lead.

A late Jeremy Cameron goal brought the margin back to 30 points and the CAts started to transition the ball easily from one end to the other.

Cameron was on a tear, kicking three last-quarter goals as Geelong ended up winning comfortably by 13 points and Joel Selwood celebrated captaining the most games in the AFL.