Jamarra Ugle-Hagan wasn’t the best player on the ground at Marvel Stadium. He probably wasn’t in the top 20.

But in a stop-start career that has thus far raised more doubters than silenced them, the Bulldogs’ number one draft picks showed something against Hawthorn that has hitherto been lacking. Presence.

No longer was he buffeted off the ball by a bigger, stronger defender. No longer was his run and jump at the footy, critical aspects for a forward with his light frame, denied with the simplest of blocks. And – and this is important – no longer were his leads routinely ignored by teammates up the ground.

Not a player on the field had more contested marks than Ugle Hagan’s four – not even the exceptional Mitch Lewis up the other end of the ground. Kick a bit straighter, normally his strength, and a serious player will begin to emerge.

Ugle-Hagan’s emergence as the game wore on mirrored the Dogs’ – torn to shreds early by the Hawks in all facets of the game, things turned on a dime midway through the second quarter. It was as if, ten minutes into the term and five goals to one in arrears, the Bulldogs finally woke up.

The results were immediate. After being massacred in the centre and torn to shreds on the counterattack from half-back, things couldn’t have been more different thereafter. From 44-29 down in contested possessions at the first break, the Dogs finished 150-133 in front. 41-30 clearances at the final whistle also told a story; and, of course, you can’t rebound if you don’t have the footy.

Every bit as exceptional as Jack Viney for Melbourne on Thursday night was Tom Liberatore. Like Viney, he is surrounded by more highly touted, highly decorated and highly paid stars of the game, whom he frequently outperforms through fierce determination, a relentless attack on the ball and old-fashioned footy smarts.

If Marcus Bontempelli is a Rolls Royce, Tom Liberatore is premium unleaded fuel. The Rolls Royce will get you places, but not without something getting the engine going. And I’ve never seen a Rolls Royce used in a Molotov cocktail, either.

11 clearances and 16 possessions from Liberatore were both comfortably the most on the night, while 439 metres gained is a remarkable effort too for a player who does his best work with sharp handpasses in tight. A goal in the final minutes to officially seal the result was a fitting reward for the man who strapped the Bulldogs to his shoulders in the second term and wrestled them back into the game. 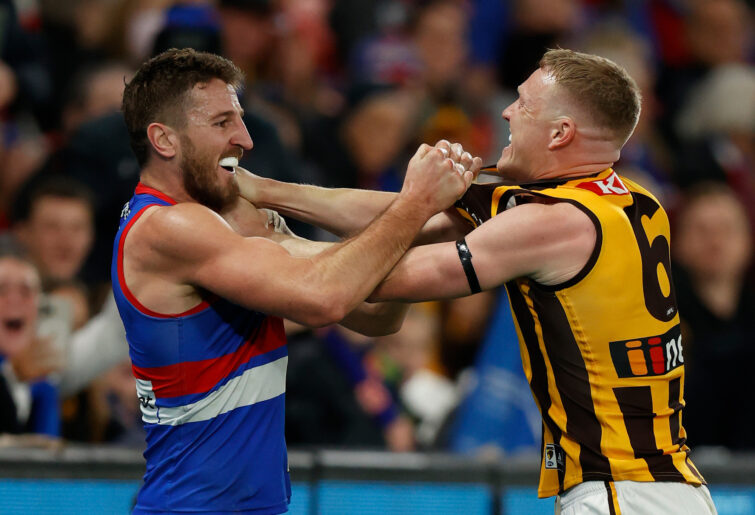 James Sicily of the Hawks and Marcus Bontempelli of the Bulldogs wrestle. (Photo by Michael Willson/AFL Photos via Getty Images)

Liberatore in miniature is Rhylee West; it’s really beginning to look like his famous father Scott had a point when he took to Facebook slamming Luke Beveridge for not giving his boy a chance.

Short of a massive bag of goals – and with 3.3, he could have had it but for some wayward kicking – you’ll struggle to see a better game in the always demanding role of pressure small forward. The proof of that is Cody Weightman, who after five goals in a half last week managed just a single possession this time around, as Blake Hardwick refused to give him an inch.

West might never be the possession-winning machine that his father was, but after 18 games there are plenty of things he does that make up for that. Overhead, his hands are sticky; in general play, his decisions are right more often than not and his delivery growing sharper by the week; and inside attacking 50, he has genuine forward craft that put some of his teammates to shame.

He tackles like a demon, too. And you don’t get a stat for things like this – a clever tap into space for Josh Schache to slam through a goal with the game still up for grabs. You’ll see many players of all ages take possession there, get tackled, and bring a stoppage.

The Hawks did plenty right, and as they’ve been all year, when they are on top can be extremely damaging. Their half-backs have a licence to run and be creative, with Changkuoth Jiath electric early and Jack Scrimshaw marking everything all night in surely the best game of his already nice young career. Luke Breust is still as clever as ever when the ball hits the ground, and he has a readymade protege in Dylan Moore; and Lewis is every bit as impressive as Aaron Naughton and Max King for about a fifth of the print space.

Ultimately, though, their issues lie in midfield, as they have all year. Phasing out Tom Mitchell may reap rewards in the long run as Jai Newcome, James Worpel and Conor Nash get chances to make the centre square their own, but when the brilliant first quarter tap work of Ned Reeves dried up, so did their ability to generate any ball of their own.

Seven goals in the final quarter added some respectability to the scoreboard, with their run and dash through the centre impressive again as the Dogs flatlined late. But good teams don’t concede 13 goals in a row.

As for the Dogs, their last eight weeks have resurrected a seriously shaky start, and as of Friday night, they find themselves in the eight. The hard work begins now, though: there mightn’t be a worse side in the game to come up against with a leaky defence than Brisbane next week.

But if Libba puts more games through like tonight, West continues to stamp himself at the highest level, Naughton keeps being Naughton and Ugle-Hagan can sustain his impact, then maybe the Dogs’ nightmare draw coming up won’t be the death of them after all.