One of Sydney’s best assets could turn out to be their biggest downfall if they don’t change things soon.

Now, let’s make something abundantly clear – while the issue is around Lance ‘Buddy’ Franklin, there is no questioning his skill level or his ability to play on into next season.

In fact, the notion should be welcomed as a boost for the Swans and fans of the club, if the legendary figure is willing to continue his career on a lower salary.

His aura has never wavered, nor has his shine ever dulled and these are off-field traits that the young, developing players can continue to inherit from the veteran.

Clearly though, the role Franklin plays in Sydney’s forward line is detrimental to the offensive ball movement the team aims to play with and has resulted in the club’s form stuttering to a level below what they’re capable of.

Predictability breeds mediocrity in the AFL and it’s a trap the Swans are falling into.

Naturally, Franklin is a ball magnet – after all, we are talking about one of the greatest forwards in the history of the sport.

Yet even in 2021, the year Sydney made the big jump from bottom four to finals, the reliance on the 35-year-old wasn’t as heavy as it is now.

Sydney’s key forward selection was like a revolving door due to form and injury, but Franklin averaged 2.4 marks inside 50 and 1.3 marks on the lead. 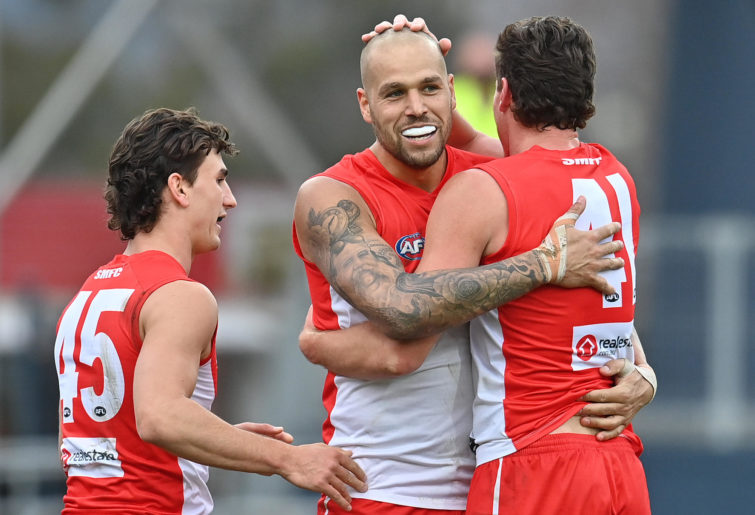 It was more than his teammates and granted, he was the most targeted player inside 50, but the split was more palatable. Hayden McLean, Logan McDonald and Sam Reid all averaged between 1.3 and 1.7 marks inside 50 in their games, while Franklin’s work on the lead was matched or exceeded by Isaac Heeney, Tom Papley and Will Hayward.

He kicked 51 goals, but the fact the Swans were able to have a variety of targets inside 50 and lower their eyes to smaller players who are elite above head made Buddy more impactful. The splits were better in who the midfielders were aiming for and it felt like there was a lot of movement.

2022 has seen the Swans settle on Franklin as their preferred option, a role he has never really flourished in.

When we consider peak Lance Franklin, we think of the revolutionary key forward, the guy who worked all the way up the ground to run his opponents ragged before beating them back into space.

He would hover 60-70 metres out from goal and either unleash his superb left boot, or outrun his opponents and get space inside 50. Think Jeremy Cameron in the modern game.

Franklin has always been a poor overhead mark, but it never mattered before.

This year, the Swans are wanting the veteran forward to play as a deep full forward and work out of the square.

This role requires strength, strong contested marking and relentless work on the lead. His core strength still holds up and he can create space to take chest marks, but Franklin really isn’t suited to a role that needs him to do so much.

In 2022, Lance Franklin is averaging three marks inside 50 and two marks on the lead a game.

It’s more than double all but Papley at Sydney in terms of marks inside 50, while McDonald is hit up accurately 1.3 times a game on a lead. No one else is averaging more than one. 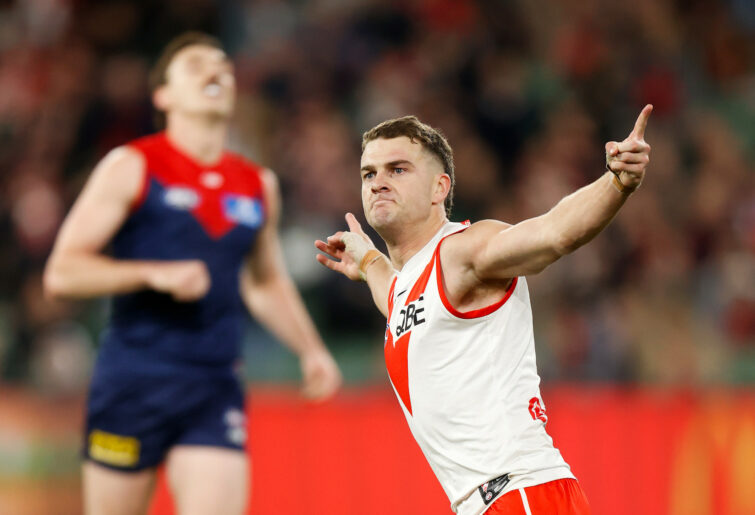 For context, Melbourne won with a varied forward line, while the two season before that, Richmond split targets between Tom Lynch and Jack Riewoldt, without the pressure forwards at their feet.

Only at the start of the Tigers’ success did we see similar dominant numbers to Franklin from Riewoldt, however the Tiger was a far better contested mark and ground-level player, while Richmond’s style of play wasn’t Riewoldt-centric.

There’s a flow-on effect to restricting Franklin’s play to being stuck predominantly in the front arc.

Teams will still place their best key defender on him, which theoretically should release the pressure on the likes of McDonald and Reid, McLean, or whoever and however many talls the Swans choose to play.

Yet even with this knowledge, the Swans’ ball movement is still Buddy-focused and the opportunities are limited for these fully capable players inside 50 with more beatable opposition.

When he’s on, it’s great. When he’s off, or blanketed by the opposition, his attitude becomes an enormous liability. The tackles can stick sometimes, but more often than not, he hits players with a clothesline even John ‘Bradshaw’ Layfield would be impressed by.

He has given away multiple free kicks in a game in 17 of his last 29 games. He kicked two goals or less in nine of these games and his frustrations were obvious.

His occupying the space inside forward 50 means the Swans need to push other players higher up the ground. McDonald is naturally a hard-working centre half forward but may be better suited to being a lead-up player early in his career, while maximising the contested marking of Reid or McLean is best suited closer to goal.

Against Port Adelaide, it was alarming just how impotent the Swans were when Buddy couldn’t separate from Aliir Aliir. In fact, the most convincing their offensive ball movement looked was when Franklin was able to move higher up the ground and create with space ahead of him.

That is the whole point. Like it or not, in 2022, Lance Franklin is a luxury piece, not a focal point.

Yes, against Brisbane he kicked six goals and against Richmond he kicked five. Again, the ability to win games for the Swans and hit the scoreboard is not what’s in question.

More often than not, Sydney are trying to hit Franklin on the lead, the opposition reads that easily and they can cover it off. We know what Einstein’s theory of insanity is and it certainly isn’t dispelled when the Swans are locked into the one player.

This isn’t to say that the Swans are better without Franklin in the team, far from it, but they are certainly functional without the one-man focal point.

Which turns our attention to the rest of the 2022 season.

They’re an exciting team with such great young talent, but the Franklin situation is stifling the offensive ball movement. To try to cater for Buddy’s strengths, they can be caught out being too precise, which leaves them vulnerable at the back.

At 35 years of age, asking Franklin to return to the halcyon days when he was roaming all over the ground for 90 per cent of game time and being utterly dominant are over.

But the one thing we know Franklin hasn’t lost is his ability to head out onto the left boot and send the ball sailing over the goal umpire’s hat from 60 metres out.

Instead of asking him to do the work between ten and 40 metres out from goal and letting teams read the flight of the ball inside 50, it behoves Swans coach John Longmire to try something different and sit his star player on the edge of the 50.

He won’t reach the incredible numbers he once had back in the day, but having Franklin occupy the space between the centre circle and the arc could be enormously beneficial on multiple fronts.

It creates way more space inside 50 for the impressive Sydney forwards, it means the ball movement will be unpredictable and entries can catch the defenders out and we know that the team can score heavily regardless of who’s in there.

Imagine Franklin taking five or six marks a game and having the ball around the mark of the 50. In the history of the game, there haven’t been too many better passing key forwards and at worst, you’ve got one of the best long-range kicks having shots on goal from 55-60 metres out.

Teams won’t want to send their best key defenders out that far to cover him, but Buddy could take the game away from teams if they don’t.

We thought that three-point shooting was important in basketball but you could leave a majority of players to take open shots. Then, Steph Curry came along and changed what range shooting was and created such important spacing for his team, demanding close defensive attention and releasing teammates.

This is what Sydney and Franklin can do to rejuvenate their premiership chances this season and beyond.

In 2022, Lance Franklin is best suited to being an impact player, rather than a do-or-die forward option that can be inconsistent for a team seeking the ultimate reward come season’s end.

Capturing what makes him so special and maximising the long-lasting traits that have made the 1024-goal star what he is today is the art form behind elite coaching and transforming a team.

Right now, Lance Franklin continues to be one of Sydney’s greatest assets, but he is also one of the team’s biggest problems.

The Swans have an opportunity to change that and we have the chance to see Buddy shape more games than ever for seasons to come.