Well, where do I start. First of all, I was very excited walking through Fitzroy Gardens to the magnificently lit-up MCG. It was first time the Lions would be playing at the MCG since Round 1 of 2020.

After defeats to both Geelong and Fremantle away from home, it was another big opportunity to step up and show a good account of ourselves.

I couldn’t fault the start. The tackling pressure was right on. It was highlighted by Joe Daniher’s tackle, which led to an Eric Hipwood goal.

Jack Payne had a goal-saving tackle on Bayley Fritsch at the other end of the ground. We didn’t make the most of our chances, during the dominant period we had.

Oscar McInerney and Cam Rayner both missed gilt-edged chances. However, Daniher converted from his third shot at goal.

Lincoln McCarthy quickly followed up with one of his own. Unfortunately, it started to go downhill from then onwards.

The number of miskicks and errant handpasses to nobody in particular meant the absence of Dayne Zorko’s kicking was telling.

We would win the ball back on the halfback line. We would chip it sideways and backwards until we’d go long down the line. We played right into Melbourne’s hands.

Zorko sees a kick in the middle of the ground, and goes for it straight away. The precise ball use kickstarts a lot of our scoring chains.

I felt we did enough to have a six-point lead at quarter time. Although, the longer the quarter went, the more we were holding on.

The second quarter was absolute carnage: 6.6 to 1.0, 12 scoring shots to one. It’s the same story every time.

There was a lack of defensive accountability from the midfielders. The number of broken tackles was very disheartening.

If I had to pick one passage of play to summarise the lack of a defensive mindset, it was this. Mitch Robinson had just kicked a goal to bring the margin back to 18 points. It was closer than we should have been.

At the very next centre bounce, Clayton Oliver wins the clearance. Jack Viney kicks it forward. Daniel Rich does well to half the contest.

Oliver is there and picks up the ball. He handpasses to James Harmes, who scores a goal. Oliver ran past all our midfielders.

Yes, we missed Zac Bailey’s excitement and flair. He doesn’t help with the defensive mindset.

The forwards had limited opportunities to impact the scoreboard. Although, they needed to provide a get-out cause.

Countless times Rich kicked in from fullback and looked nonplussed at his options. He just had to kick it long and hope for the best.

Our defence held up quite well considering the relentless attacks from the Dees.

I’ve been critical of Brisbane. Melbourne were far superior across the whole ground.

This might seem a bit picky. In recent times, the great teams of the AFL have been disliked.

Think of the Lions and Hawthorn three-peats. Then Geelong, Richmond and now Melbourne.

Although, the negative feeling towards a team usually occurs after they’ve had success. Fellow top sides don’t fear Brisbane. 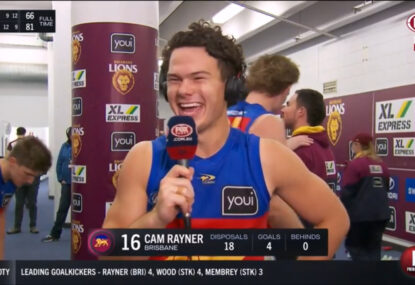 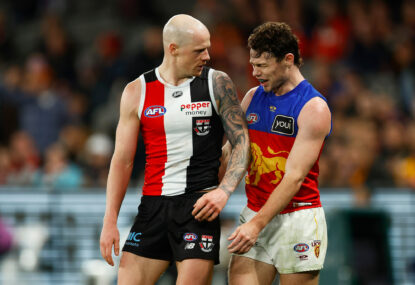