With Geelong’s Tom Stewart reported for his violent action, which left Richmond’s Dion Prestia physically unable to remain in the game, I argue that the AFL should send off players for such offences.

In terms of the Geelong versus Richmond match, the offending player (Stewart) stayed on the field for the rest of the game and was instrumental in Geelong holding off the Richmond comeback with a timely mark in the defensive 50 with minutes to go.

Stewart actually led the Geelong possession count for the match with 29 (and six marks) while a sick and sorry Prestia watched from the stands.

A send-off option would bring the AFL into line with other professional sports that penalise fragrant abuses of the rules by sending off the culprit.

While I recognise that it may be difficult to know if the action was deliberate or just reckless, the defining aspect for the maximum penalty would be whether the unlawful play takes out an opposition player from the game.

But a send-off option does not need not to leave an AFL team a player short, as is the case in football and the rugby codes when a player sent off created an enormous disadvantage that makes it extremely difficult to win or even defend a lead.

There is an obvious need to ensure that any AFL match remains fair given the huge advantage a team would have with greater numbers of a lengthy and wide Australian rules footy field. 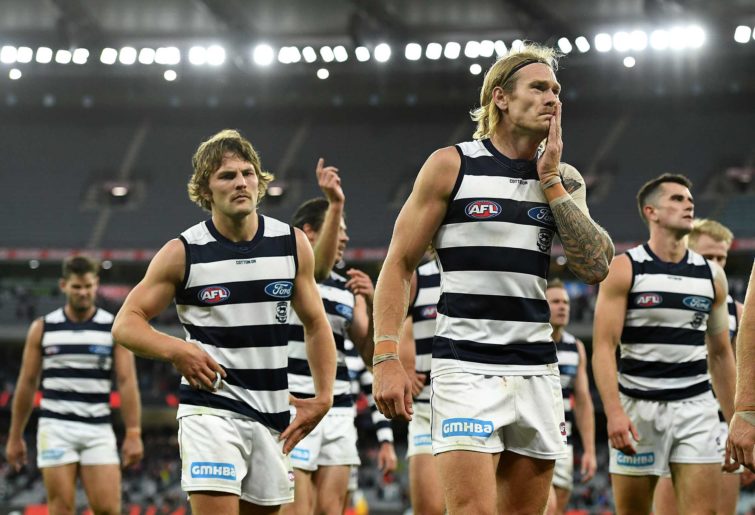 Could you imagine a team running through the middle with an extra man coming into play, or an extra man in defence?

Hence, a send-off rule for the AFL could allow a team to replace the banned player with an interchange player, but that team will be left with one interchange less player for the rest of the match.

This would be more in line with the example of basketball when a violent foul allows the excluded player to be replaced.

But policing this send-off option in the AFL would need video refs that can act quickly to advise the field umpires that a serious incident needed to be assessed.

On Saturday, much to the ire of commentators, the game carried on around Prestia as he lay on the ground not knowing where he was, and play continued with the Cats scoring a goal through Tyson Stengle as Prestia was helped from the ground.

This was clearly an unjust situation for Richmond in a match that was decided by less than a goal.

The send-off rule would have the benefit of making any player think twice about violently impeding a player either deliberately or recklessly, which may also help minimise concussion incidents, an issue of prime concern for the AFL.

At a time when some of the recent rule changes have left both players and fans dismayed and confused, there are few reasons why the AFL could not modernise its game with a send-off rule given the enormous advantage that is gained by a deliberate or accidental action that takes out a key player during a game, especially when the option I propose would not mean that a team will be left with fewer players on the field.

What do readers think?