Early each week, I receive emails from the NRL regarding the judiciary process for the prior weekend’s games.

The release has a table of each citing, which outlines such basic info as the offending player’s name, their club, the minute of the match in which it occurred, the specific charge grade and whom the misconduct was played out on.

This last bit of info has had me stumped.

Does it really matter who they committed the act of foul play against? Isn’t the main thing simply they transgressed?

But the more I’ve thought about it, the more I think this particular piece of information should be front and centre for the judiciary.

There have been a variety of rules brought in to protect the smaller, more creative players from the thuggery that was simply expected as part of the game in the dinosaur days.

Elbows to the head are now met with multiple weeks on the sideline, punching is a thing of the past and even hitting a man after he’s kicked the ball has become far more harshly punished.

And good. It’s the way it needs to be.

But we still see certain players being targeted.

Being that I go to more Knights games than any other club, the player I see copping this kind of treatment on the regular is Kalyn Ponga.

People who question that young man’s toughness need to wake up to themselves. He gets absolutely belted week in, week out and he never shies away from it. Which, you know, is kind of his job.

But there’s a difference between a fullback returning the ball into a wall of defenders and taking his licks compared to, for example, that same fullback putting a stabbing kick through and then getting hit late by a cheap shot from a much larger man who knows that taking the opposing No. 1 out of the game through injury is worth spending ten minutes on the sidelines for. 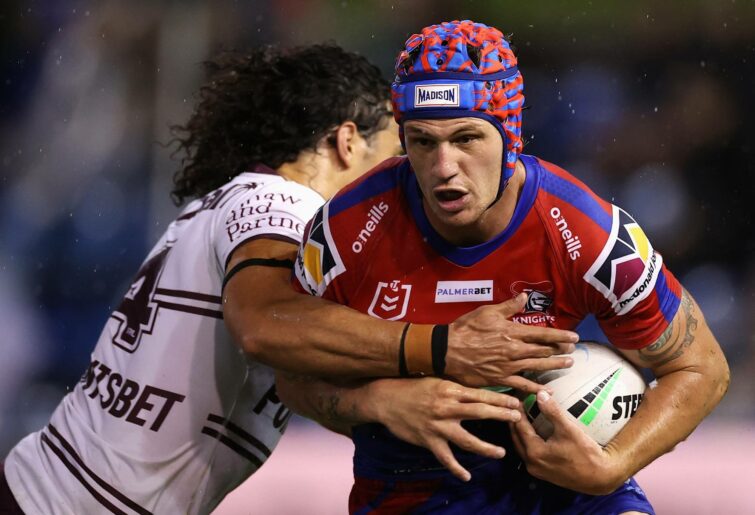 Elliott Whitehead, thanks for providing this most recent version of that particular story, although it’s been other blokes on other fullbacks – or halfbacks, or five-eighths – on multiple occasions throughout this season alone.

Now, under the present system, the judiciary would look at Whitehead’s record – although pretty much everyone is back to having none thanks to this year’s record expunging – for committing the same or similar acts when deciding what kind of penalty he would be facing.

And that should continue to be the case.

But would it be so wild if, rather than whack serial offenders with harsher penalties, we also protect serial victims?

What if once a player – any player – has been on the receiving end of misconduct that warrants a trip to the judiciary, say, twice in the one year, any further incidents in which that player receives an illegal hit receive added loading?

Basically, if it can be shown a given player is targeted with illegal shots by opposition teams, then they will receive the added protection of any further illegal hits on them being punished more harshly.

Sure, it may come across as different rules for different players, but if there is a record of a given player being targeted more frequently than others, then they deserve to have different rules apply to them to maintain their safety.

And again, it’s not to make a player untouchable or to have the metaphorical red shirt on when they take the field, it’s simply that illegal acts performed on them carry added weight at the judiciary.

Furthermore, these players would have this designated status after they had copped dirty play on multiple occasions – it’s not like teams could nominate who they want to have added protection.

The hope would be that when game plans are being drawn up, players and coaches would think twice about telling their designated standover men to be reckless when coming into contact with a player who cops more than their fair share of the grubby stuff.

The likes of Kalyn Ponga, Sam Walker and Reece Walsh are going to come in for added attention from the big men. Making them clock up their personal tackle count or simply peppering them with bombs all days will serve to blunt their attacking prowess. That’s how the game works, I’m fully on board with it.

But when there is seemingly a designated plan to hit these players late, high or off the ball, then it’s not enough to punish the players making the illegal hits in the same fashion as anyone else.

If a player is being treated differently by their opponents, then this difference should be reflected by the judiciary.