There are three guarantees in life. Death, taxes, and Port Adelaide requesting to wear their erroneously labelled ‘prison bar’ jumpers at every possible opportunity.

The argument goes like this: we have worn this jumper through our history, and have the right to celebrate our tradition. On the face of it, this is a reasonable argument.

Indeed why should clubs not be allowed to celebrate history? Well, according to Collingwood, for commercial reasons, but we’ll get to that.

Unfortunately, when Port Adelaide have argued history matters, they have only argued their history matters. How dare someone dictate to US what we wear, so the argument goes.

But other history and tradition, who cares? In 2014, Adelaide were going to wear a version of the traditional South Australian state guernsey. The CEO Steven Trigg at the time stated “This is about our deep respect and admiration for South Australian football and all those who have been involved”.

Indeed, the Adelaide Crows entered the AFL in 1991 as something of an amalgamation of everything good about South Australian footy. They even wore, and still wear, the same colours as the state side.

But always a club obsessed with their own tradition, Port shot back, releasing a club statement:

“Our club’s current and former SA-born players are disappointed by the Crows decision. The Crows have stated they are wearing the guernsey to celebrate SA football. Port Adelaide finds this reasoning peculiar given that wearing it in a Showdown will actually divide the state. This guernsey is a symbol of SA football unification, not division.”

So there you have it. Port will decide what tradition is and isn’t. And how to interpret tradition. Adelaide went on not to wear the state jumper in the showdown, while Port wore their jumper which borrows its design from the state jumper. But that’s okay, because Port say so.

The main counter to Port wearing their prison bars seems to be from Collingwood, who claim the black and white stripes are their intellectual property. Furthermore, no other club should gain commercially from wearing a similar design in the AFL.

The response from Port people is usually less nuanced. Something along the lines of, ‘who cares?’ Well, apparently Port do.

In 2017, when Port flexed their financial power, spending half a million dollars to use a Gold Coast Suns home game as their own sort-of-home game in China.

Unfortunately the financial visionaries at Port had failed to realise the Suns shared colours with the Chinese flag. Either that or they thought they would simply bully the Suns into submission.

Nonetheless, the top brass at Port were worried the Suns would get some financial benefit from wearing their own jumper, so they attempted to stop such a travesty.

David Koch accused the Suns of “playing funny buggers” around the jumper situation, apparently convinced they would simply lay down. The club who hate being told what not to wear, were telling another club not to wear a jumper in a home game that wasn’t theirs, despite teams not having the right to dictate such things anyway.

The true irony – and let me indulge a small moment of opinion as a brief escape from all these inescapable facts – is that Port’s greatest ever jumper came in the AFL era. The home jumper they wore for over a decade after they joined the AFL in 1997.

The jumper in which they made their greatest ever achievement: the 2004 AFL premiership. That jumper, with a thick panel of teal across the chest, and lightning bolts structured as a nice reference to their prison bars, has been inexplicably forgotten. 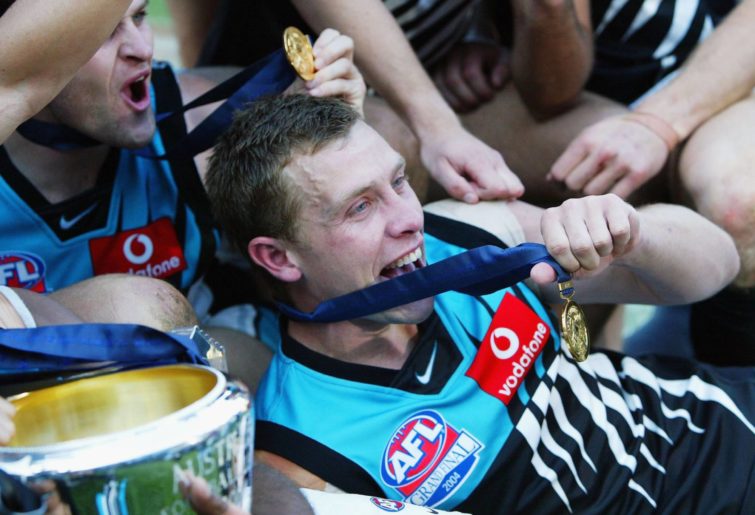 Port are a club steeped in tradition. They had a terrifying array of pink and magenta jumpers in the 1800s, but they don’t really talk about those.

And we all know about their 36 (well 34 before they joined the AFL but who cares about accuracy) SANFL premierships. You know, because they remind us every chance they get.

But the true Port Adelaide tradition? Well surely that’s telling everyone else how great their traditions are, whilst having no respect for anyone else’s.

Hopefully Port’s attempts to wear their pier guernsey are as successful as their sojourn into China.