Eddie Jones has moved to beef up his team’s ball carrying threat the first Test against Australia by starting heavyweights Billy Vunipola and Joe Cokanasiga on Saturday.

English media reported on Wednesday that Vunipola is set to play his first Test in more than a year after he was snubbed by Eddie Jones last season in a purge of experienced heads.

Meanwhile Bath winger Cokanasiga will reportedly be on the team sheet as a starter when Jones confirms his 23 on Thursday afternoon (5.15pm AEST).

Cokanasiga, a 24 year old who stands 1.93m tall and weighs almost 120kg, also last played more than a year ago, against the USA and Canada, and has struggled with knee injuries, and three bouts of Covid since then.

A PCL injury in late 2021 had him questioning his future in the game. 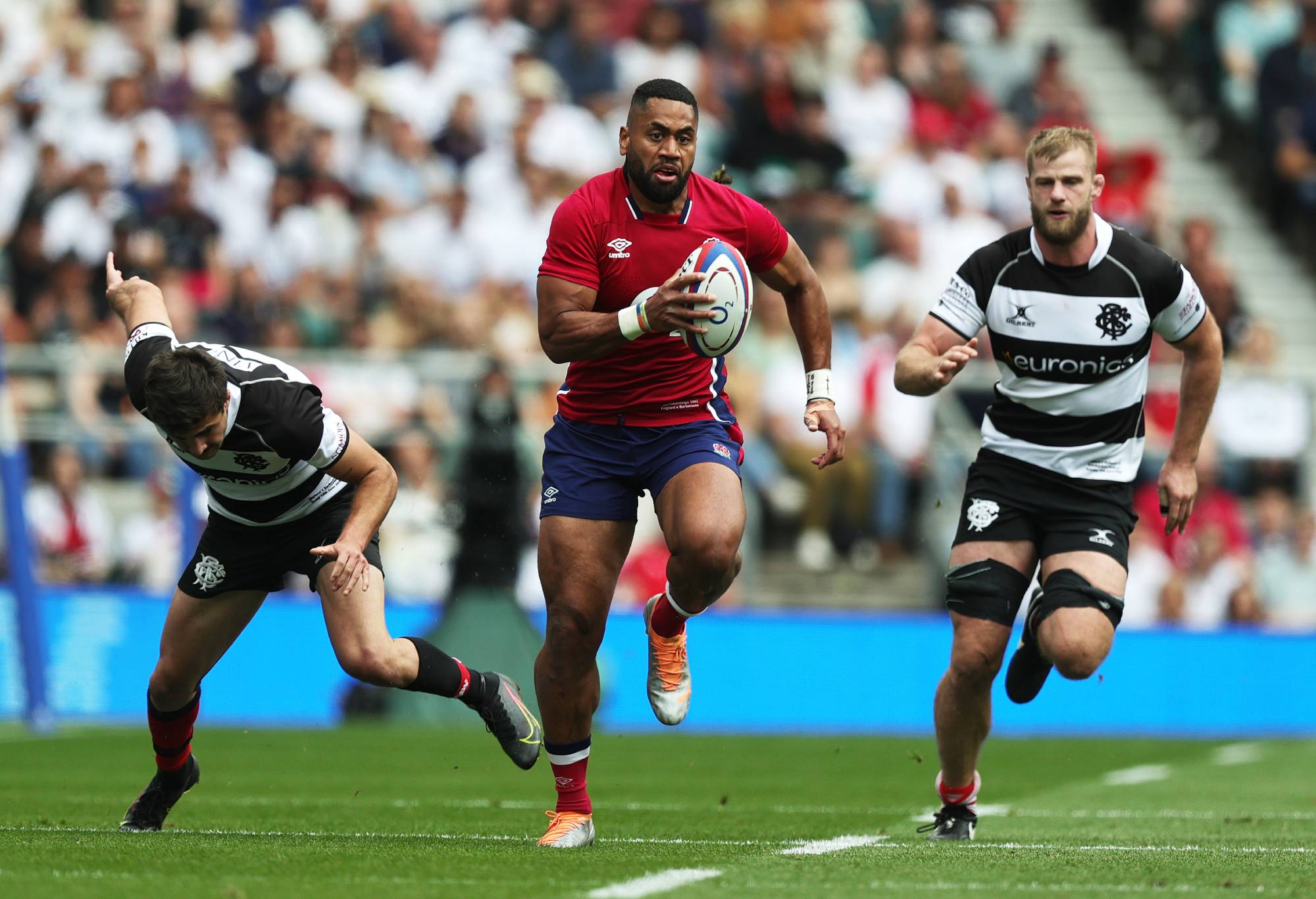 Joe Cokanasiga of England runs with the ball during the International match between England and Barbarians. (Photo by David Rogers/Getty Images)

“That was probably the hardest part. I remember walking back from the shops after I got the call. It was devastating,” he told the Guardian.

Cokanasiga, who scored a try when England beat Australia in November 2018, has been dogged with injuries, and his playing time was limited this season.

The Daily Mail reported Cokanasiga would start on one wing with Jack Nowell on the other. The report added that Harry Randall would start at scrum-half ahead of Danny Care with Marcus Smith and Owen Farrell at 10-12, Joe Marchant at 13 and Freddie Steward at No.15.

Ellis Genge, Jamie George and Will Stuart are set to be the starting front row, with Maro Itoje, Courtney Lawes and Tom Curry certainties.

Lawes could start at lock or blindside flanker.

Billy Vunipola is motivated to make a big impact having being “hurt” by his omission, according to Jamie George.

“I know that it hurt him not being involved in this,” George told reporters.

“I have spoken to him at length about it. He was upset. This is where he wants to be. I am hugely excited to see him back in the Test arena because this is where he deserves to be. I know he will be champing at the bit if he gets his opportunity on Saturday.

“Billy was hurting. I don’t think he will mind me saying that. He loves playing for England. He loves playing at the top level. He is probably the most competitive person I have ever come across. He wants to compete against the best and show that he can be the best. What better opportunity than against Australia on their home turf?.”

Vuniopla forced his way back into Jones’ thoughts with some impressive work at Saracens.

“The way that he leads at Saracens is different,” George said. “He leads from the front. He works incredibly hard. He is constantly wanting to evolve his game. He has been on it the whole time. The influence he has on a team is massive; both sides of the ball – everyone talks about his carrying but jeez his defence is good as well. His defence is so, so physical.”

All Blacks fullback Jordie Barrett says the team isn’t letting a Covid outbreak affect them ahead of a challenging first Test against Ireland in Auckland on Saturday.

With head coach Ian Foster and two of his assistants laid low, players David Havili, Jack Goodhue and Will Jordan were also sidelined by the virus.

“You kind of flip it on its head and it’s a good opportunity, especially at the start of the campaign, for players to take a bit more ownership and responsibility and understand their own game and the team game and what we’re trying to achieve in these three weeks,” Barrett told stuff.co.nz.

“It’s not ideal. You lose a bit of edge around some important people in the environment, but I’m taking a positive approach to it, like the team, and trying to use it as a time to galvanise as a group.”

Barrett was looking on the bright side, with early detection of the virus allowing time to adjust.

“It’s not the worst,” said Barrett. “It happened on a Sunday, Monday and Tuesday. It’s a blessing it happened this early in the week. Any later and it disrupts team combinations and detail around training.

“But it’s happened early, we’ve been in this Covid sphere for a couple of years now, and we’ve been dealing with it during Super Rugby, we dealt with it last year on the northern tour, so we’re just going to take it in our stride.

“You pick an extended squad for a reason. We understand if you’re not picked, you’ve got to be ready, and if you are ready and you get a crack, then that’s your opportunity.”

Izzy back on deck

Israel Folau’s four-year exile from Test footy ends on Saturday when he runs out for Tonga against Fiji in the Pacific Nations Cup.

Folau was dumped by Rugby Australia after his anti-gay social media posts.

New eligibility laws paved the way for his return under Toutai Kefu with Tonga.

“He’s fitted into the group seamlessly, he’s just one of the boys,” Kefu told the Sydney Morning Herald. “He’s a mature young man who goes about his business. 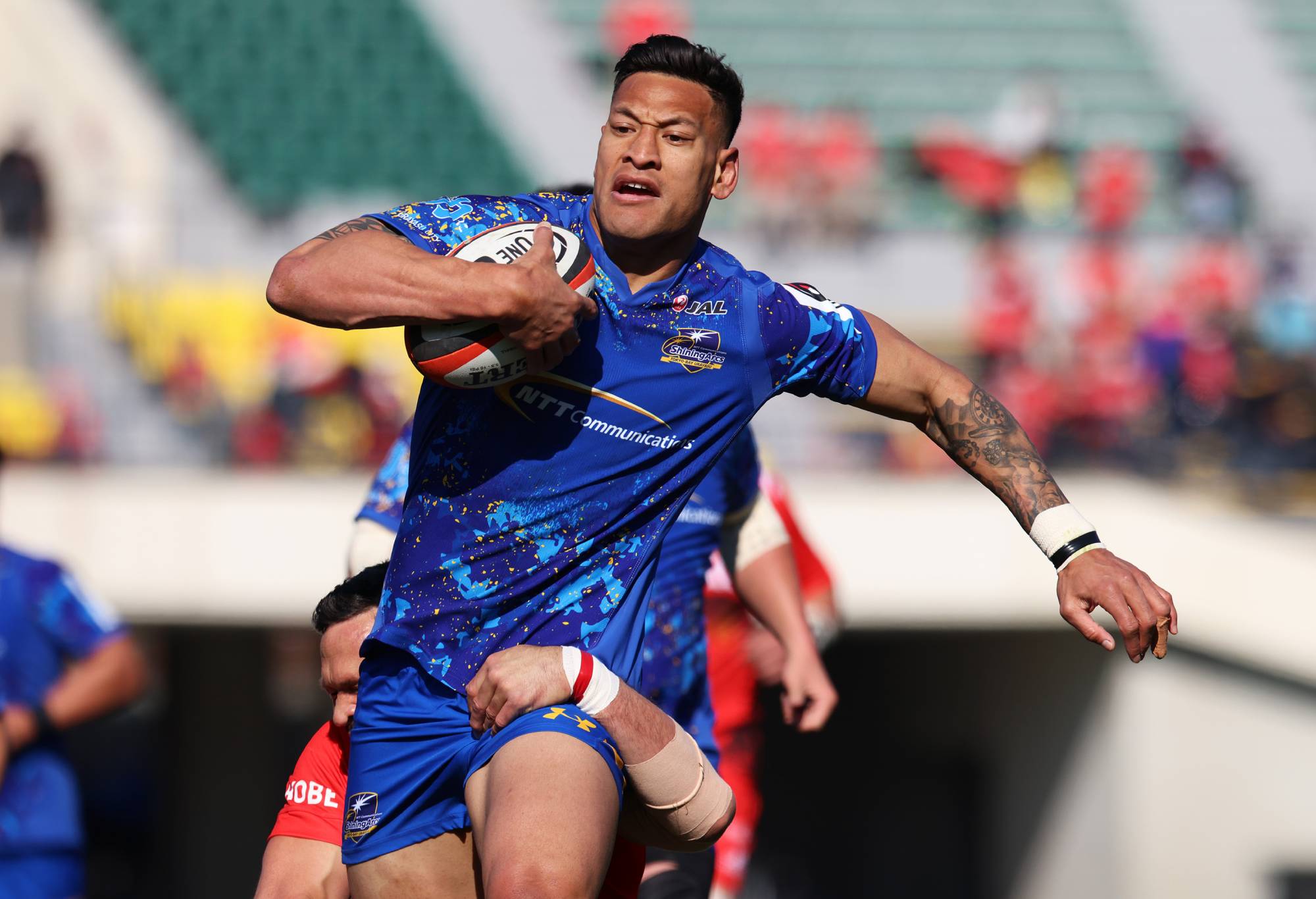 “No one’s really talked about [the past], he’s just looking forward and trying to be himself and fit in, which he’s doing seamlessly.

“The boys love him and, no matter who you are, this mob will bring you down to earth very quickly. There’s a lot of banter and laughter and that just builds our connection.”

Kefu said the new laws had made a huge impact on the strength of his team.

“It goes to show we have a different class of player now, they’re much more professional. That’s no disrespect to the boys who’ve worn the red [jersey] before us, but these guys are proper athletes.”

How Boks could lose No.1 ranking

It seems highly unlikely but the Springboks could lose their world No.1 ranking to Ireland or New Zealand this weekend.

The Boks are hot favourites to beat Wales at home but a shock defeat wuld relegate them from top spot.

A loss by 15 or fewer points to Wales would see the Springboks lose two points while a defeat by 16 or more points would see South Africa drop three rankings points.

Should the Springboks lose (by any margin), France can not pick up enough ranking points with a win over Japan to prevent the winner of the All Blacks vs. Ireland Test from moving to No 1.

The Boks named their team on Tuesday with Elton Jantjies starting at flyhalf and the electric Damian Willemse at fullback for the first of three Tests at Loftus Versfeld on Saturday.

Jantjies has been preferred to regular starter Handre Pollard, who played in the French Top 14 final win for Montpellier on Friday, while Willemse is chosen ahead of the vastly more experienced Willie le Roux.

It suggests the Boks might look to run with ball in hand and move slightly away from their reliance on a kicking game, looking instead to tire the Welsh at altitude before unleashing their powerful forwards off the bench.

The rest of the backline has a familiar look to it with wings Makazole Mapimpi and Cheslin Kolbe, centres Lukhanyo Am and Damian de Allende, and scrumhalf Faf de Klerk, who does provide a kicking option from the base of the ruck.

“We have the advantage of having several players that are quite versatile, so a guy like Damian Willemse can cover flyhalf and centre in addition to fullback, while Kwagga (Smith) covers each of the loose forward positions and can even slot in at wing with his Blitzbok (Sevens) experience,” head coach Jacques Nienaber said in a media release from South African Rugby.

Uncapped lock Salmaan Moerat and loose-forward Elrigh Louw have been named among the replacements and will almost certainly get a run as the Boks use their 6-2 split on the bench in the second half to add fresh muscle in the pack.

“We have a fantastic crop of young players who have really been working hard at training and putting up their hands, and it is pleasing for us as coaches to give Salmaan and Elrigh this opportunity,” Nienaber says.

“We have a plan for the season in terms of giving some of the young players a chance to show what they can do at international level, while at the same time taking stock of the seasoned campaigners and where they are in terms of their rugby.”

The second and third Tests will be played in Bloemfontein and Cape Town respectively over the following two Saturdays. Wales lost all 10 of their previous matches in South Africa.