I read the other day that Ray Warren, who now has time on his hands, has done some voice work on an episode of an ABC television program “Bluey”.

I’m not familiar with that show. I don’t watch the national broadcaster, tending to find their views much to the left of my own.

I am however quite familiar with the genre of Ray Warren. Each year we got to enjoy his calling during Origin matches as well as the grand final, and his work was also mainstreamed by the iconic Billy Birmingham.

Ray was an excellent caller and I enjoyed his banter with Paul ‘Fatty’ Vautin and Peter ‘Sterlo’ Sterling, although some others in the box could be overbearing and tiresome. I liked Ray.

His calling was accurate and straight forward, and he always brought a certain gravitas that befitted large occasions.

In modern times Andrew Voss is my favourite to listen to, and at his best when you’re trying to watch an unwatchable match.

I grew up listening to Billy J Smith on radio 4IP and for me, he’s still the king of callers. He was animated and amusing, and I seem to remember he called the games by himself, somehow managing without the aid of an inarticulate former player.

I know they have to find employment somewhere but surely there must be pubs in the country where they could work.

Rab’s retirement made me feel a bit nostalgic so I revisited his most famous piece from Game 1 1994.

“Coyne at the 79th minute is tackled … trailing 12-10 … Langer pushing it wide … Walters onward …Carne joins in, floats a pass to Renouf … Renouf down the touchline … beats one, gets it infield … Hancock gets it on … Qld are coming back! … Darren Smith for Langer … Langer gets it away … here’s the big fella … gets the pass on … Coyne! Coyne goes for the corner and gets the try! … Qld, that’s a miracle! … (gibbering from co-commentators followed by) … that’s not a try, that’s a miracle!”

There was so much to enjoy in that beautiful try. It featured multiple passes, creativity, desperation and a dramatic finish. It has great appeal for lovers of palindromes, with the movement starting, Coyne, Meninga, Langer, and then finishing in that reverse order.

I notice that Meninga handled twice in the movement but was the only player not mentioned by Warren. Conspiracy theorists may be able to explain this.

The try is even more meritorious as NSW defenders didn’t really do much wrong. Ricky Stuart’s effort in the final minute of a match was outstanding. He forced Renouf on the near side-line to pass in and then chased hard to assist Fittler attempt to tackle Coyne on the other side-line.

Probably my favorite feature of the try is that the attack was all good old fashioned attacking rugby league before the invention of the block play.

It is so refreshing to see players creating space, rather than relying on runners to rush up into the defensive line and try to interfere without interfering with it too much if you know what I mean.

But as I watched the grainy footage, to my horror I noticed someone looking like the Queensland captain being used as a lead runner by Kevin Walters before he passed to Carne. Gilmeister appears to contact the outside shoulder of David Barnhill who has to change direction and is therefore just short of making his covering tackle on Renouf.

Of course back then (hallelujah) there was no bunker, so we got to enjoy the sight of coach Wally Lewis immediately embracing Dick Tosser Turner.

It’s funny how time plays tricks with your memory. Wally Lewis has always been my favorite player, but I’d completely forgotten he was also an Origin coach in 1993 and 1994. A marvelous player, but perhaps blessed with quite the same coaching and commentating skill, he was very much the Freddy Fittler of his time.

So there is an ethical dilemma. Do we still consider that the greatest Origin try, or is it tarnished by the slightest of obstructions in the lead-up?

Important decisions like these are best left to the individual conscience. For me I think I’ll just glance away for an instant as Walters passes, and then continue to let the poetry unfold.

The NRL is finals bound and it’s the time of year when teams require their marquee players to perform. Here is a list of… 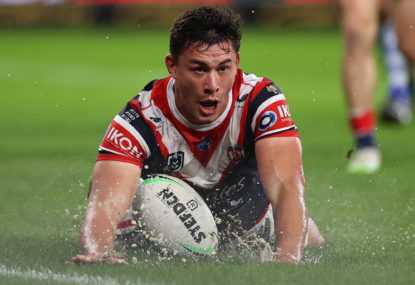