We’re on the home stretch of the AFL season now: 14 games down, eight to go. We’ve got the bye rounds behind us, and we have just come off one of the biggest marquee rounds of football ever seen, that moved and shaped the eight in a significant way.

We’ve got a better handle on all teams since we last checked in a third of the way through the season, and now it’s time to assess the contenders again, along with a predicted finish.

Round 14 was when all the contenders were going to flex their muscle against each other, and give us a read on what would unfold for the rest of the season.

It was fitting that Melbourne and Brisbane kicked off the round, and even more fitting still that the Demons played their most brutal and complete football of the season to wipe the Lions off the park.

There’s a reason the team that finishes on top of the ladder wins the premiership far less often than you’d think – Melbourne last year were the first team to do the double since Hawthorn in 2014. No side can be up all year, and a mid-season lull is absolutely required. 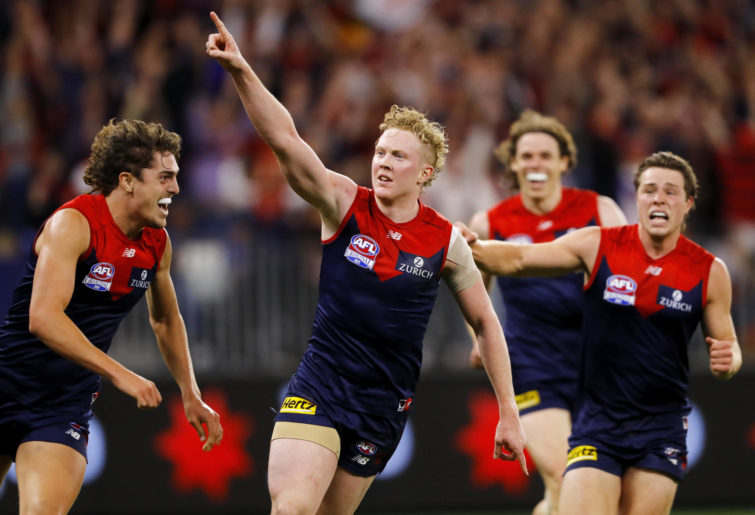 The Demons are in the unfamiliar position of being defending premiers. (Photo by Dylan Burns/AFL Photos via Getty Images)

The Dees lost three in a row before their bye, yes, but they were due to drop some games after having never really hit top gear all season despite winning. Steven May has missed a few games, Max Gawn will miss some too, and others have missed one here and there. It will freshen them up in the long run.

Melbourne’s defence will remain sound, but it’s their connection between midfield and forward-line that can sometimes show some faulty wiring.

If teams can force the Demon midfield to kick under pressure rather than be overpowered and overrun, then they can be exploited. Easier said than done. They’re still the team to beat.

Geelong have moved right up to second after five wins in a row. They also have the second best percentage in the comp, and a draw that can help them boost it in the run home.

It’s likely that percentage will determine home finals in that first week of September, and every point is worth mining.

We know what the Cats are by now. They win home and away games. They lose finals. Rinse and repeat.

Can this year be different?

We can talk about the forward duo of Tom Hawkins and Jeremy Cameron. And boy, what a year the latter is having, by the way. The rise of Tyson Stengle has certainly given Geelong a different dimension in the forward half, as has the continued improvement of Brad Close.

The Cat midfield doesn’t have as much start power as it used to, but Patrick Dangerfield is due to resume after a lay-off, and Sam Menegola just has. Their experience is valuable, to add to Joel Selwood and Mitch Duncan, but it’s been shown that it can’t handle the younger heat in September.

Brandon Parfitt and Tom Atkins help, but they’re no Clayton Oliver and Christian Petracca are they? And we saw how that played out on preliminary final weekend last year.

Geelong are always hard to score against, until that dam walls breaks eventually, deep in the season. Still, they’ll be there again. They always are.

We spoke about Melbourne’s demolition against Brisbane earlier, and it made for ugly viewing if you were on the Lions side of the fence.

Another big game, another big failure. This is a team that simply can not compete with the best. They are either not good enough or mentally fragile. Take your pick.

2019 – second on the ladder, out in straight sets with two Gabba losses.

2021 – fourth on the ladder, out in straight sets with another Gabba loss.

Brisbane score easily but don’t defend stoutly. The first is easy in home and away football. The second is necessary in finals. Even this year, they are again the best attacking team, but ranked ninth for defence.

Can you really trust Joe Daniher to deliver consistently at finals time? Eric Hipwood? Charlie Cameron? Cam Rayner? Would you bet your last dollar on Hugh McCluggage to nail that key goal? The answers are all no, for mine. 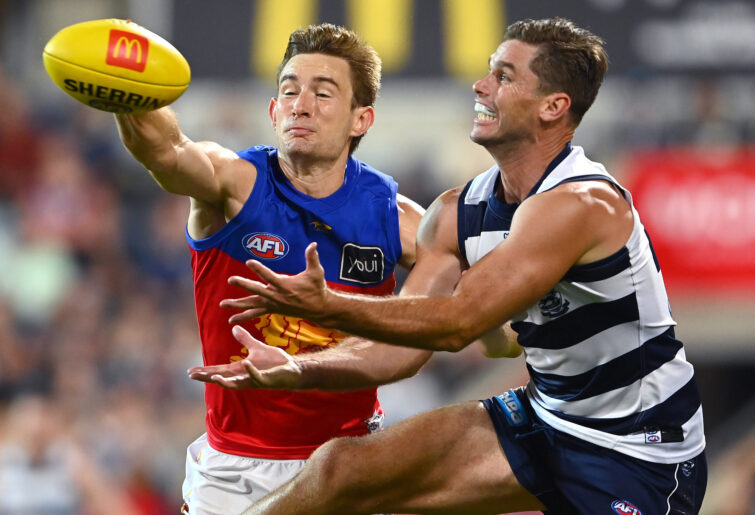 They’re a funny team, Fremantle. Hard to get a handle on.

They’ve beaten Geelong in Geelong and Melbourne at the MCG, along with claiming Brisbane as a scalp along the way.

But then they’ve been pathetic in losses to Gold Coast and Collingwood in willing conditions, and were humiliated against Carlton last Saturday.

They were out-toughed, out-hunted and out-played.

Who are the real Dockers this year? They’re still a team on the rise, learning how to play together after a raft of injuries and personnel changes in previous seasons, so we can forgive some inconsistent efforts. But inconsistent efforts aren’t going to put silverware on the table come September.

The fact is, Freo haven’t played finals since 2015, and no team is going all the way with that kind of history behind them. They still have enough chances to finish top four, but have straight sets exit written all over them. We’ll see how much they learn from it in 2023.

It’s easy to love what Carlton are producing under Michael Voss this season.

Their work around clearances could just about be the best we’ve ever seen. Patrick Cripps, Sam Walsh, Matthew Kennedy, George Hewett, Adam Cerra – collectively, their core strength, ability to absorb or break through a tackle, fast clean hands, and working as a team until they get the release player, is really something to behold.

Up forward their chemistry is building, with Charlie Curnow back to his best and Harry McKay, a Coleman medallist mind you, playing second fiddle, along with just enough variety in their smalls and mediums to cause headaches to any backline.

The Blues own defence is becoming a problem due to injuries, but they are still standing up manfully. They have the same problem as Fremantle with no recent finals experience, so it’s hard to think they can go all the way this year, but they’ll give every team a fright on their day.

Sydney’s worst habit is that they tend to go completely missing for a quarter or so. It’s happened in losses to Brisbane, Gold Coast, Carlton and Port in the last two months, and an avalanche of goals the other way has been the result. 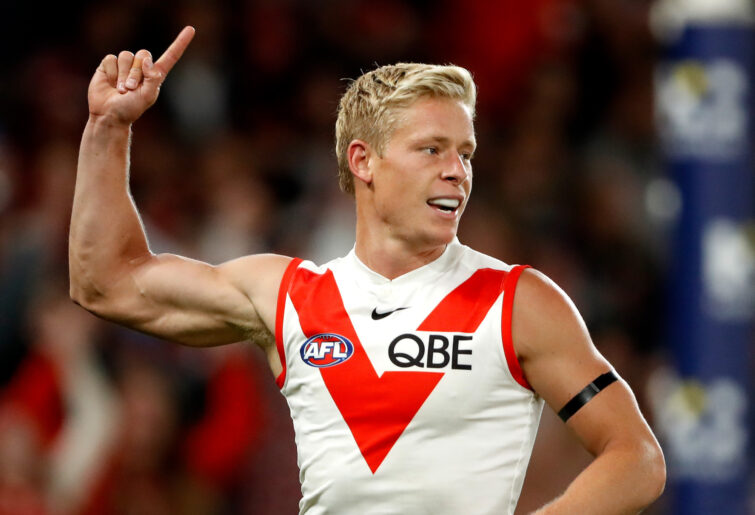 It’s costing them games, and it could cost them a finals spot if they’re not careful too.

Collingwood have been the surprise packet of the season, roaring into finals contention with five wins in a row, including taking down Melbourne, Carlton and Fremantle in Perth. They’ve gone from plucky upstart to holding a position in the eight. Can they stay there?

Craig McRae has done a phenomenal job really, given the Pies have a “bits and pieces” feel to them. The forward-line is unfashionable. The midfield consists of offcuts from other clubs, alongside a couple of evergreen veterans. The backline is their most settled area, and is doing enough.

Every game they win under McRae casts a further shadow over Nathan Buckley’s credentials as a coach.

The Bulldogs continue on their erratic ways under Luke Beveridge. Capable of winning the flag or missing finals, they are currently in the eight for only the second time this year.

They have a unique one-two punch up forward with Aaron Naughton and Cody Weightman, and we know they are always capable of winning plenty of ball around the midfield. The handbrake has been off since their bye, kicking 125 points and winning shoot-outs in both games. Kill or be killed?

The biggest problem for the Dogs is that they might have left their run too late – they have the toughest draw of any team on the road to September, with not a single gimme among them.

Richmond are 6-2 from their last eight games, with both losses by a goal, to Sydney and Geelong. No-one watching the Tigers and Cats in the Saturday twilight on the weekend was under any illusion – these are two teams capable of contending for the flag.

It was the only top eight clash on the weekend where both teams brought their best, and it was awesome to behold.

Damian Hardwick has their chaos game in fine fettle, which is a by-product of a defensive set-up looking as resilient as in the premiership years. Richmond’s best is still as good as it was back then, but they are having trouble sustaining it for long enough – they have lost four games this year when between 3-6 goals up after half-time.

The Tigers are sitting ninth but have West Coast, Gold Coast and North Melbourne in their next three, which could have them knocking on the door of where they want to be if they can knock them all off.

The scenes are ugly at St Kilda, with three losses in a row since their bye, each one worse than the last.

The Saints were plucky against Brisbane upon resumption, where the spirit was willing but the flesh was week. They were apathetic against Essendon, in an atrociously bruise-free performance. The bad old days of Alan Richardson were back against Sydney, with horrid ball use.

Their season is almost over, and what does it say that 34-year-old Paddy Ryder, who can barely play two out of every three games, still seems to be their most important player?

St Kilda will be sitting on that one lonely flag for a long time yet.

There has been a bit of talk about Gold Coast playing finals this year, which inexplicably seems to be gathering momentum among some media types. It’s not going to happen.

The Suns are in a good place right now though, playing with substance and heart, and showing how well drilled they are.

For the first time in a long time, they are still competing as we enter the final third of the season, and that is with some significant injury troubles too.

2023 might be their year to play finals for the first time, but it still won’t come easy.

There’s often a predicted finals team that stumbles out of the gates before picking up and charging home. They’re fun to watch, and an entertaining story, but they hardly ever make it to September.

That’s Port this year, and they might have fired their last shots with this group too.

Travis Boak can’t keep going forever, Robbie Gray is almost done, Charlie Dixon is more bark than bite. And when Jeremy Finlayson is the answer, the question must be an ugly one.