Having thrown away a seemingly unassailable lead last time out against the Cowboys, the Sea Eagles suffered a similar collapse and conceded four in four minutes to close the game, but were still able to cling on by six points.

Melbourne coach Craig Bellamy placed the blame squarely on his team’s defensive effort, saying that his team lost the game in the first hour, going 36-12 behind in the 65th minute before firing up late on.

“After 60 minutes, we were getting what we deserved,” he said.

“We sparked a bit at the end, but it’s too late. At the end of the day, if you’re going to win games at this level you need to be consistent the whole 80 minutes and we certainly weren’t.

“I was really disappointed in our defence and in some individual performances that weren’t up to scratch. Manly scored 36 in that first hour and there were tries that just shouldn’t have been scored, whether you have combinations or not.

“That probably affects our points scoring a little bit, but it doesn’t stop you from putting your body in front and tackling someone, or from working to a defensive system. We were all over the place, especially in that first hour.” 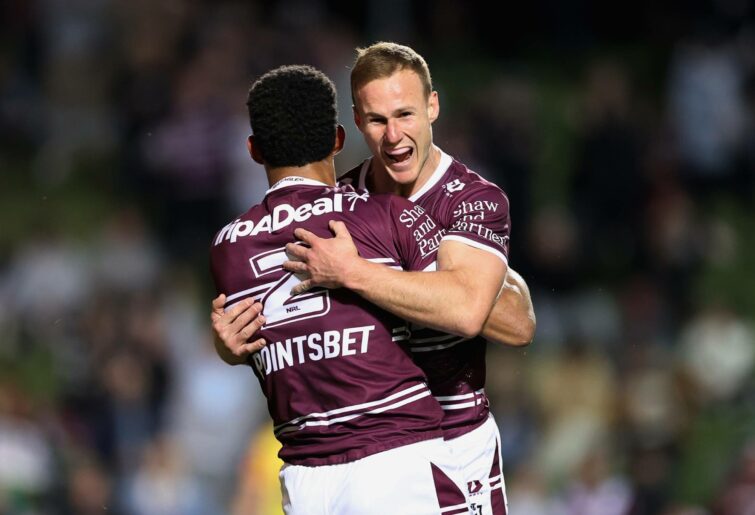 With the Sea Eagles clinging on to finals contention and their direct rivals of the Roosters and Rabbitohs facing tough tasks against Penrith and Parramatta respectively – and two others, the Dragons and Raiders, facing each other – this was a game that they needed to win to keep the season alive.

They destroyed their for-and-against advantage through ten minutes of late chaos, but were able to grab the vital competition points before a run in that will see them face three direct rivals within the next month.

“There were four minutes of mayhem that we need to adjust and fix, but at the end of the day, it was a game where we had our backs to the wall,” said Des Hasler.

“With the disappointment of where we were a few weeks ago, we knew we had to win tonight, and in doing so, beat the Melbourne Storm which is no easy feat.

“Some parts of it weren’t pretty but there’s a lot there that’s really positive. That’s what we’ll take out of it.

Cherry-Evans was at his imperious best, steering his team around the field with his boot, while Foran took advantage of any field position the Sea Eagles got to create points.

This was the 92nd time that the pair had combined for a win and it took all their smarts and experience, because Manly’s handling was often poor and they did plenty to invite the Storm in, especially in the first half.

Cherry-Evans changed the course of the game with a near-unstoppable 40/20, from which Foran created a try, and the Sea Eagles never looked back from there.

Once the passes stuck, however, it became a carve up. The Storm outside backs had held up well of late, but the inexperience told with Foran able to ruthlessly exploit Marion Seve and Grant Anderson on the Melbourne right.

It was the most un-Melbourne-like performance. They went an age – from half time until five minutes from the end – without entering the Manly red zone. Cherry-Evans forced repeat sets, and when he didn’t, the Storm invariably dropped the ball.

This was not the strongest side the Storm have ever put out, given the lack of Cameron Munster, but they still began as strong favourites.

The decision to replace Munster with Jayden Nikorima – playing his first game since April 2016 – backfired badly, with the five-eighth hooked after 53 minutes. He won’t be the only player to struggle with Haumole Olakau’atu, but he might be the one who struggled the most.

Ryan Papenhuyzen, in his first game since Round 9, was far from his best. He made a key error for a try, through one of the worst forward passes of the year and failed to feature at all in attack until the latter stages, when Manly fell apart.

Papenhuyzen’s game couldn’t have started much worse. He was caught on the last tackle in good ball, then through a forward pass direct from a scrum base, then in a good ball set, attempted a kick that went straight into the arms of Tolutau Koula.

As they might have mentioned from time to time in the commentary, Koula was a schoolboy sprint champion and the son of two Tongan Olympians, so once he’d taken the kick, there was no competition.

Manly had barely scraped into Melbourne’s half, but were ahead. They made five errors in the first 12 minutes – a total of just 16 play the balls – and would be punished.

The Storm had been far from their best in attack, but Papenhuyzen finally found his range and threw a long ball outside Christian Tuipulotu for Nick Meaney to score.

Manly finally completed some sets and were almost immediately able to take advantage: Olakau’atu stepped outside Nikorima and gave the ball to Koula with line begging, only for the centre to drop the ball cold.

The Sea Eagles needn’t have worried. Cherry-Evans booted a huge 40/20 and moments later, Foran was able to create an overlap and get Jason Saab over for their second. 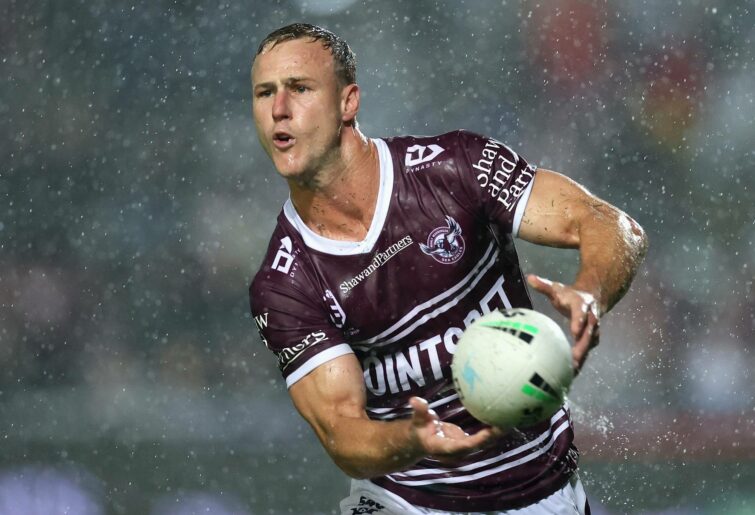 DCE did it again, this time with a high kick. He sent up a steepler that split Papenhuyzen and Meaney, popping straight up in the air. Tuipulotu rose highest, caught the ball and got it down. On balance, it was another in the negative column for the fullback on his return.

Whenever Manly held the ball for any length of time, they looked dangerous. Again, they went to the left and, again Foran engaged the line to create the try.

He got the ball to Andrew Davey and the backrower, in an unfamiliar position on the edge, had enough catch-pass to find the wide wingspan of Saab for his second of the night.

The left edge was truly firing. The same back-line move through Foran nearly sent Saab in, only for the scramble from Seve to stop him in his tracks and deny the hat trick.

Manly simply recycled the ball and when they came back, it never made it as far as the winger, with Morgan Harper able to ground despite the best efforts of Jahrome Hughes.

The Storm have rarely looked as shot as this. Seve and Anderson were barely holding it together on the right, while on the left, Koula broke the line and made a break, delivering the field position from which Olakau’atu was able to easily beat Nikorima for the next.

The Storm got a swift response – straight from the kick off. Marty Taupau ran the ball in, made contact and as players dropped off, Brandon Smith stole the ball and went under the posts.

Nikorima was hooked, but the defensive issues in his area continued. Cherry-Evans was the creator, using Olakau’atu as a decoy to put Koula through a huge gap on the Melbourne left.

Manly had thrown away a 14-point lead in their last game and somewhat imploded again.

Nelson Asofa-Solomona was able to grab a late try, and when Josh Schuster was offside from the kick off, Papenhuyzen got another. The kick off went out on the full and suddenly, Justin Olam was in again.

Papenhuyzen would get the score within six points and give his team one play to win it: Hughes kicked, and appropriately, Cherry-Evans was there to snaffle the ball and close out the contest.