Australian Football Hall of Fame member and “proud and passionate South Australian” Neil Kerley has died in a car crash. He was 88.

Kerley made his mark on Australia’s home-grown football code as an outstanding player, coach, administrator and media figure.

Even long after his retirement as a player, Kerley’s passionate support for South Australia – especially in State of Origin clashes with arch-rival Victoria – was unrivalled.

He also coached five SANFL clubs to a total of four premierships.

When the Adelaide Crows entered the AFL in 1991, Kerley was appointed their inaugural football manager as a key support figure to first-year coach Graham Cornes.

“Neil’s contribution to the game is immeasurable and he embodied what it means to be a proud and passionate South Australian,” Crows chairman John Olsen said in a statement.

“As a player and coach, he was tough and uncompromising and he commanded respect, and he will be remembered as one of football’s great characters.

“In the context of his overall career, his time at the Crows was brief but his impact is best described as significant given he helped build the club from the ground up.”

Kerley’s verbal stoushes before Victorian counterpart Ted Whitten during State of Origin fixtures were the stuff of legend.

He died on Wednesday afternoon in a car accident in the Murraylands region of SA. 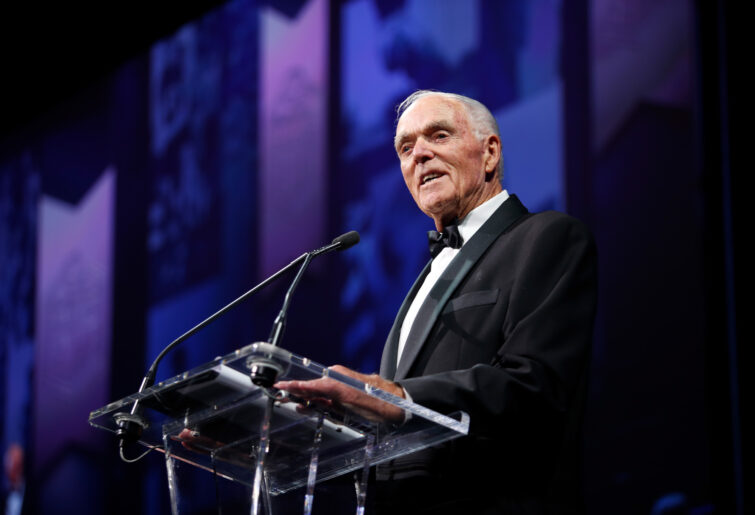 Melbourne star Clayton Oliver has signed a whopping seven-year contract extension, tying him to the Demons until the end of 2030.

Reported to be worth around $1 million per season, the deal has taken Oliver out of the market a year before his current contract was set to expire, at which point he would have become a restricted free agent.

It gives the 24-year old the longest deal in the AFL, with Dees teammate Christian Petracca’s contract expiring at the end of 2029, having signed his own seven-year extension earlier in the year.

Regarded as one of the game’s premier midfielders and among the favourites to claim this year’s Brownlow Medal, Melbourne list manager Tim Lamb said the news is ‘a huge endorsement of the culture we have built’.

“Clayton is an elite midfielder who has shown incredible consistency over his career, highlighted by the three Bluey Truscott Trophies already to his name. He is loved and respected by his teammates and coaches and is a key pillar of our ambitions to achieve sustained success,” Lamb said in a statement.

“His ability to perform at an extremely high-level week after week is a direct reflection of the amount of work and effort he puts into his training. His training standards are reflected in his performance come game time.

“At only 24-years of age, we are excited to see what Clayton can achieve in the future and we know our members and supporters will love watching him perform in the red and blue for the rest of his career.”

The Demons hope to lock in star out-of-contract pair Angus Brayshaw and Luke Jackson next, with the premiership pair hotly linked to rival clubs on massive deals.

Fresh off the emotions of earning top billing at the AFLW draft, Montana Ham will juggle her year-12 studies in Melbourne with pre-season training in Sydney.

The gun midfielder could have remained in Victoria but instead nominated for the NSW draft, allowing the Swans to swoop with their prized No.1 pick.

With the upcoming season starting in August, Ham, 18, will have to get stuck into her first AFLW campaign, travelling back and forth across the border, while dealing with the toughest year of school.

“It’s been a flood of emotions, but I’m very excited for the future,” she said.

“I’m really looking forward to getting to Sydney and meeting my teammates.

“I’ve got to find the right balance with school and footy, but I’ll be heading up to Sydney for three weeks while I’m on school holidays and doing as much training as I can.”

Ham was confident she could juggle her competing commitments.

“Throughout the week I’ll be at school, and then on the weekends I’ll go and train as much with Sydney who have been awesome with their support around me and do everything they can to help me,” she said.

“They’ve got a great list … I’m really looking forward to getting down there and meeting them.”

Ham, who said her mother would stay in Melbourne while she travels, plans to study exercise and sport science at UTS next year but was particularly keen to live by the water in Sydney.

“The water’s a big part of who I was growing up, I always went down to the coast for surfing,” she said.

“Being able to live 20 minutes from the beach is something I’m really looking forward to.

“It’s a bit daunting [to move away] – a new challenge for me but I have a lot of good people around me and a good support network. I’m absolutely thrilled.”