The State of Origin behemoth is put aside for a few days for NRL to take centre stage again.

Well, not really. The focus on Round 16 is who can show they deserve a phone call from Brad Fittler or Billy Slater for Origin III on July 13. David Fifita, Ryan Papenhuyzen, Jack Wighton, Latrell Mitchell, Reece Walsh …

For actual NRL fans, there are a few teams who need to start getting their act together or it will be too late come August or September.

The eight teams in the top eight have all only lost once in the past five weeks, apart from the Rabbitohs – who have gone 2-2 as well as the Round 13 bye.

For the other half of the competition, the Raiders (3-2) are the only ones who haven’t lost at least three of their past five with the Roosters (1-4) a particular concern as they have now dropped to ninth heading into the toughest task in the NRL, a Friday night trip to Penrith.

And it’s Beanie for Brain Cancer Round. So do your bit to support the worthy cause by warming up your noggin.

Here are the burning questions for each team heading into Round 16.

Are Sea Eagles too conservative? It’s clearly tougher without Tom Trbojevic to create attack but Manly don’t have much flair in their spine of Reuben Garrick, Kieran Foran, Daly Cherry-Evans and Lachlan Croker. And with Dylan Walker coming off the bench, it’s more of the same. They are third in the NRL for completion rate at 81 per cent but ninth for line breaks. Time to give it some air or bring in an attacking player with some spark – maybe it’s time to install Josh Schuster at five-eighth and send Foran to the bench utility role. 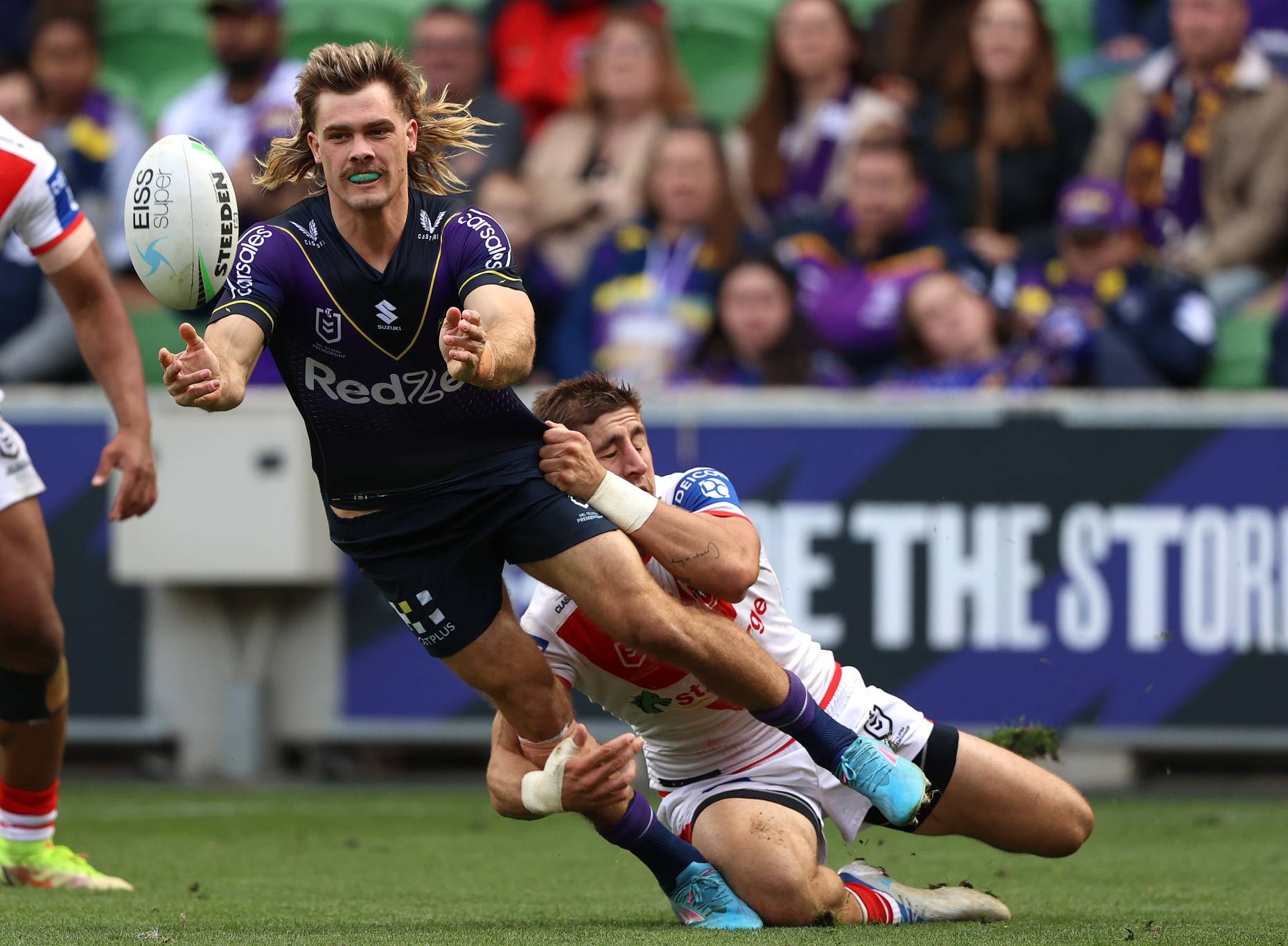 Should Ryan Papenhuyzen be on Blues bench? The Storm flyer has been so close to making his Origin debut for three straight years. He was in the extended squad in 2020 but was hobbled by a calf injury after his Clive Churchill Medal-winning effort in the grand final. Last year his chances were ruined by a lengthy stint on the sideline due to concussion problems and this season, knee, hamstring and COVID-19 conspired against him. The Damien Cook on the bench experiment worked for NSW in Origin II but if a spot opens up somewhere at the Blues, the Melbourne fullback could finally get his call-up.

Should Knights try to re-sign Anthony Milford? He was non-committal earlier this week when asked about his future beyond this season, which suggests he’s either already signed, sealed and delivered for a return to Brisbane to link with the Dolphins or he genuinely doesn’t know where he will end up. Newcastle need to bolster their halves for 2023 after Jake Clifford and Adam Clune have failed to nail down a position this season so if they’re not going to keep Milford around, they need to find a playmaker who can revive their comatose attack, which is a distant last in the NRL at 13.1 points per game. 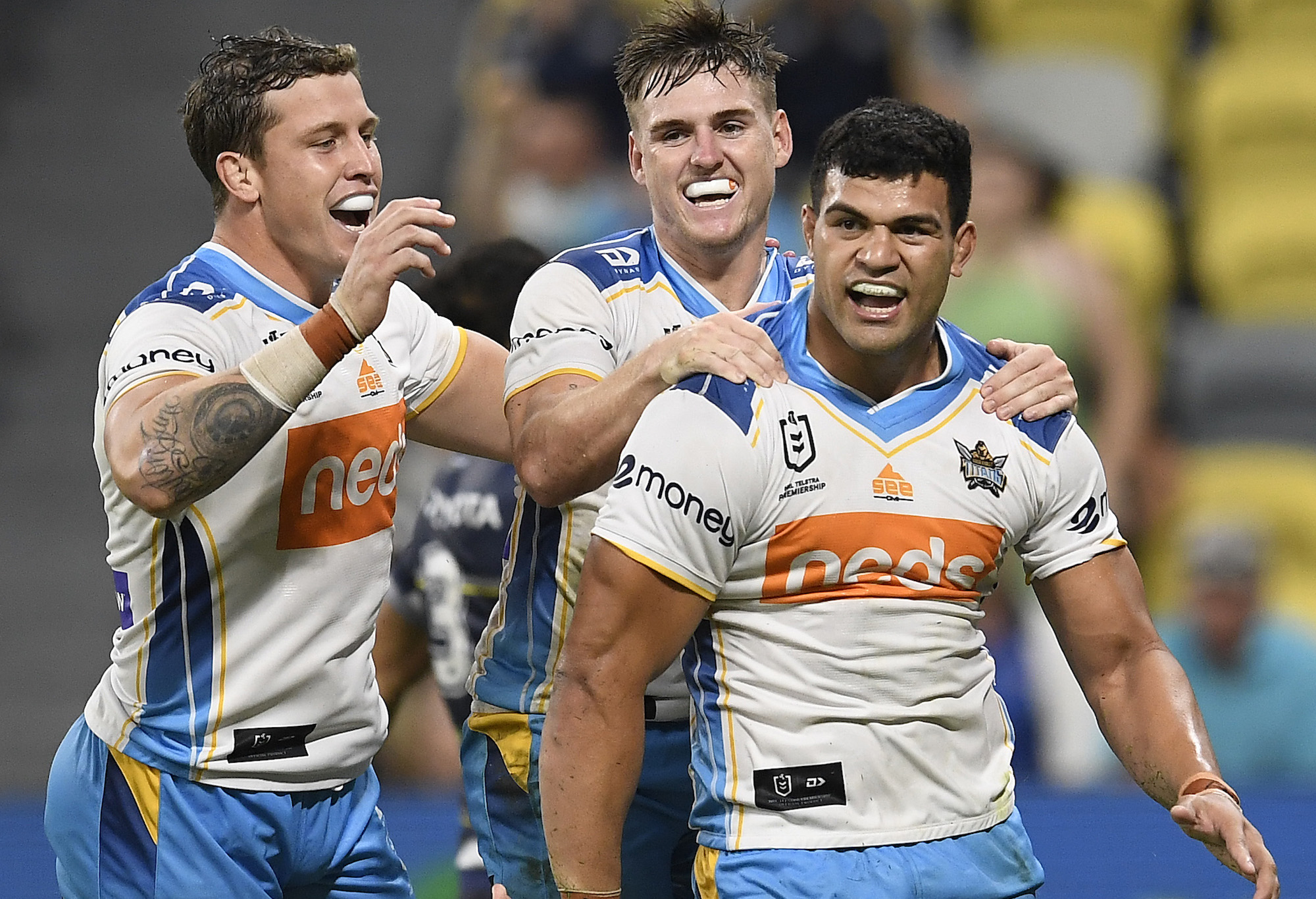 Will pent-up rage finally bring out the best/beast in David Fifita? David Fifita is due to return from his knee injury via the interchange. He should be embarrassed that he was not considered for Queensland selection in Origin I before he was then forced out for a few more weeks with his knee injury. Justin Holbrook needs to wind him up, literally and figuratively, have him ready to run off the back fence and charge into the Knights. Throw him in the middle rather than the edge to see if that does the trick.

Is it time to rest some Panthers? Isaiah Yeo got a spell after Origin I and he claimed afterwards it was always the plan to take a week off, rather than it being a result of the head knock he copped in the first minute of that match. With the premiers holding a four-point lead over Melbourne at the top of the ladder, Ivan Cleary should have the luxury of being able to rest his many Origin and international representatives over the final ten rounds. 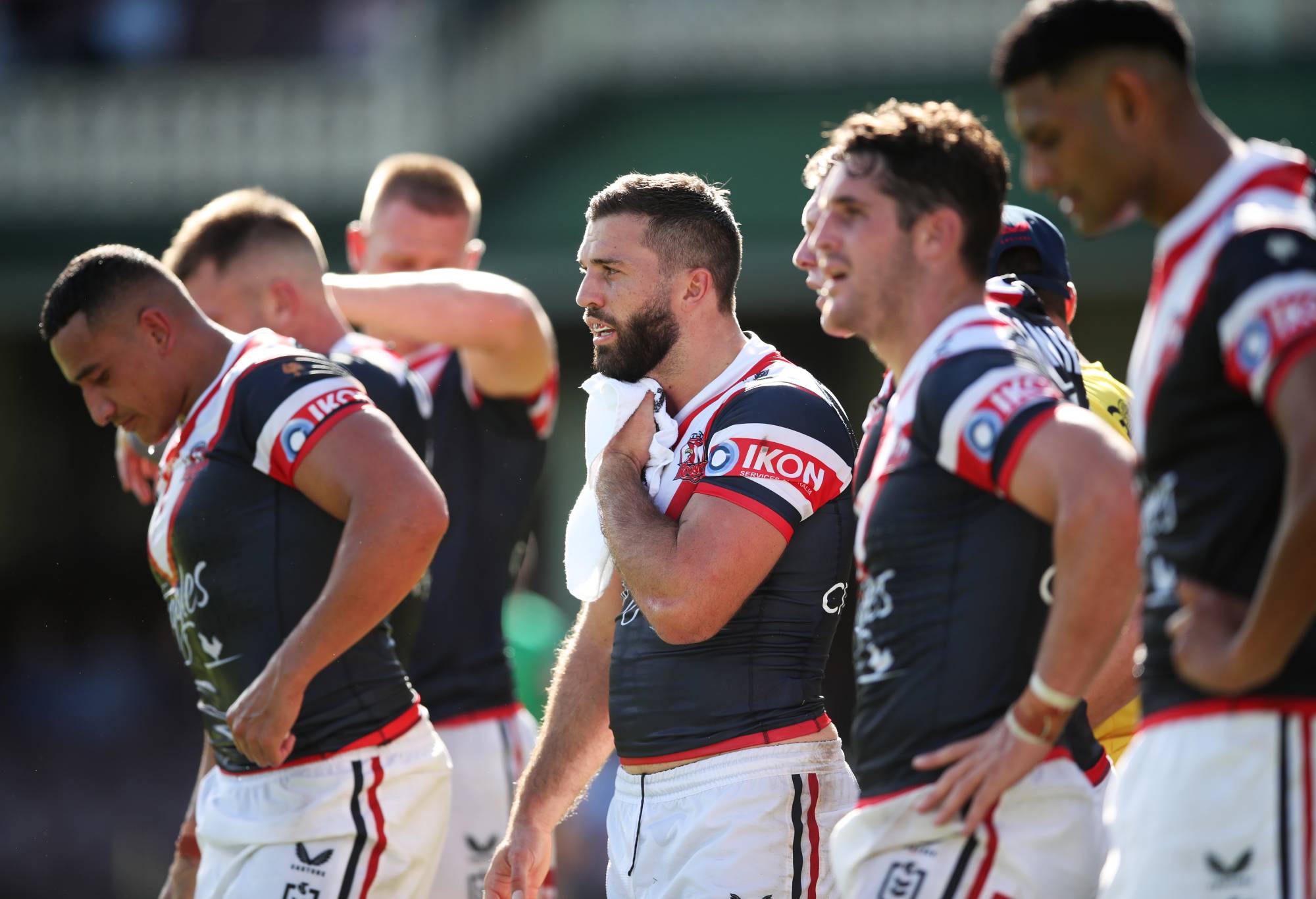 WTF are Roosters thinking by signing Matt Lodge? For a club that regularly talks up its vaunted culture, the possibility of taking on Lodge on a short-term deal for the rest of the season makes zero sense. If the answer is Lodge, there’s something wrong with the question. Desperate times can provoke desperate measures and this looks to be a straw-clutching exercise.

Has there been a bigger kicker than Matt Burton? His towering bombs during Origin II had the crowd oohing and aahing and the Queensland wingers bumbling and fumbling. Dual international Andrew Walker was known for his sky-scraping kicks, Wests Tigers winger Pat Richards could bring rain with his and Kevin Longbottom is part of Rabbitohs folklore for his long-range boot, but they would have been doing well to get more hang time than Burton.

Do Sharks need to upgrade their spine? Matt Moylan is still yet to agree to terms for a new deal at Cronulla. They’ll continue to be a very good side with Moylan and Nicho Hynes as their halves but probably not a premiership-winning one, unless Hynes, fullback Will Kennedy and hooker Blayke Brailey become representative starters. No team in the NRL era has won a title without at least a couple of current rep stars in their spine apart from the anomaly that was the 2005 Wests Tigers with Kiwi five-eighth Benji Marshall the only member of their quartet who had gained higher honours that year before the decider.

Who will make way for Kyle Feldt? The veteran winger is close to a return from a knee injury, named in the extended reserves. Hamiso Tabuai-Fidow and Murray Taulagi have been in form on the wings, Peta Hiku and Valentine Holmes are ensconced in the centres and Scott Drinkwater has done exceptionally well at fullback after missing the cut at the start of the year.

Are Broncos better off resting Adam Reynolds and Payne Haas? Adam Reynolds (ribs) and Payne Haas (ankle) are hoping to play and the club expects both to suit up. These are their two most important players and Kevin Walters would be better off sacrificing a win or two here and there over the next few weeks if it means these two will be available down the final stretch of the regular season. Reynolds is set to need ongoing pain-killing injections to manage his rib problem while Haas received needles in both shoulders before Origin II and then suffered ankle damage.

Can Lachlan Ilias bounce back? First of all, there was way too much of an over-reaction to Ilias being benched before half-time in South Sydney’s loss to the Dragons before the Rep Round break. Young halfbacks have bad games, it happens. Remember the time Andrew Johns turned up with his hair dyed red for a big game against Manly in 1996? Peter Sterling in commentary said it drew unnecessary attention and he played like a clown that day. Souths have invested heavily in Ilias in light of the decision to let Adam Reynolds walk so they need to persevere with him over the coming weeks even if his mid-season rookie year doldrums continue. 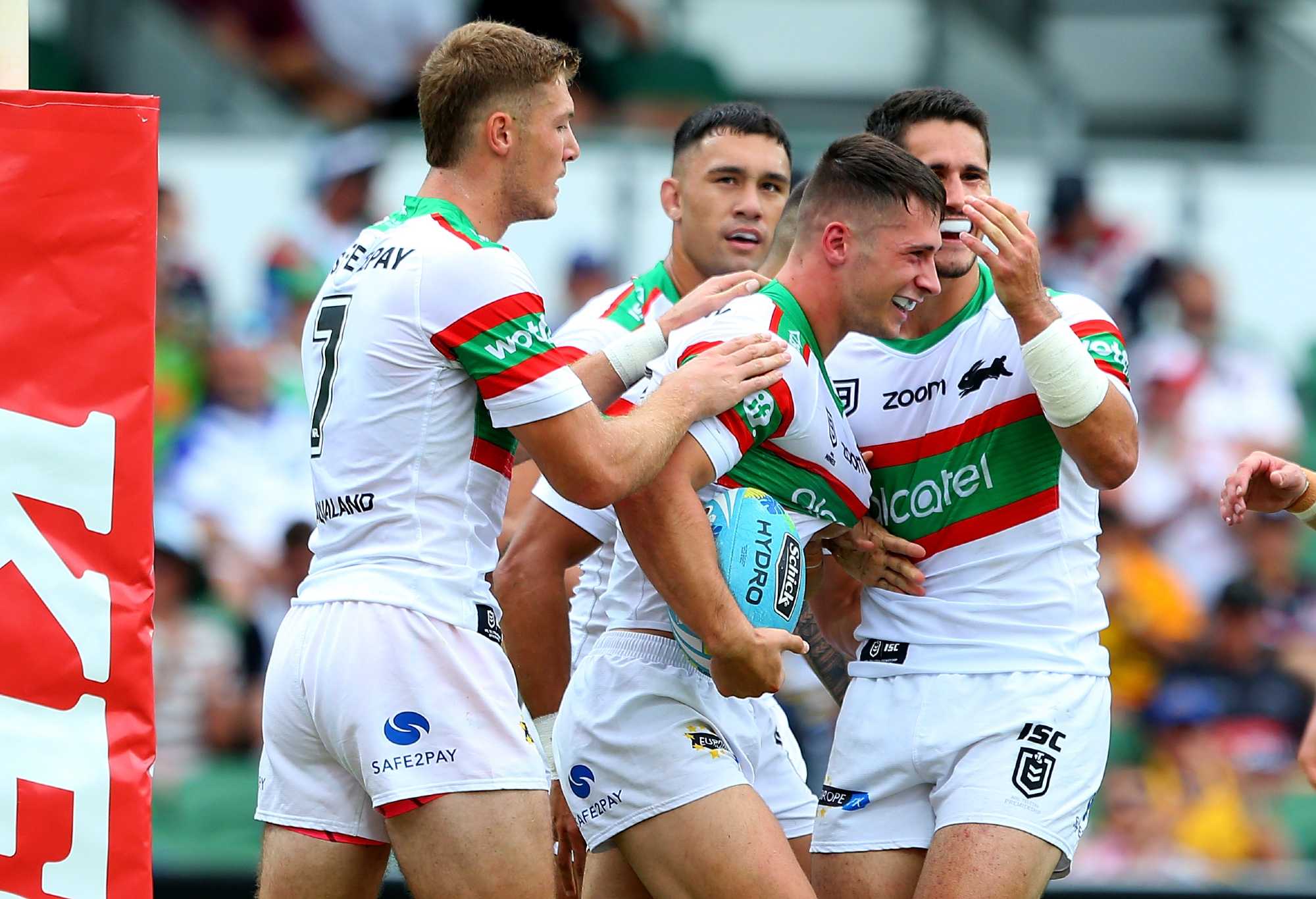 Can Eels keep it together despite roster distractions? Nathan Brown is the latest high-profile Eel to have his future placed in the spotlight with the club letting him know he can walk next year if he can find a better deal elsewhere. They can deny it all they want but 2022 is likely to be Parra’s best chance for a few years to finally break their title drought with Reed Mahoney, Isaiah Papali’i, Ray Stone, Oregon Kaufusi and Marata Niukore moving on next year. The last hurrah factor could be a galvanising force over the second half of the year but there is also the danger of a team fracturing quickly in this scenario.

Is it time for Shaun Johnson to head to Super League? As he nears his 32nd birthday in a couple of months, now could be the time for the Kiwi legend to head to the UK to see out his career rather than sticking around and risking ending his NRL career outside of the first-grade team. He may retire altogether but he could benefit from a late-career switch to the less defence-focused Super League like a couple of his contemporaries in James Maloney and Mitchell Pearce have done in recent years. 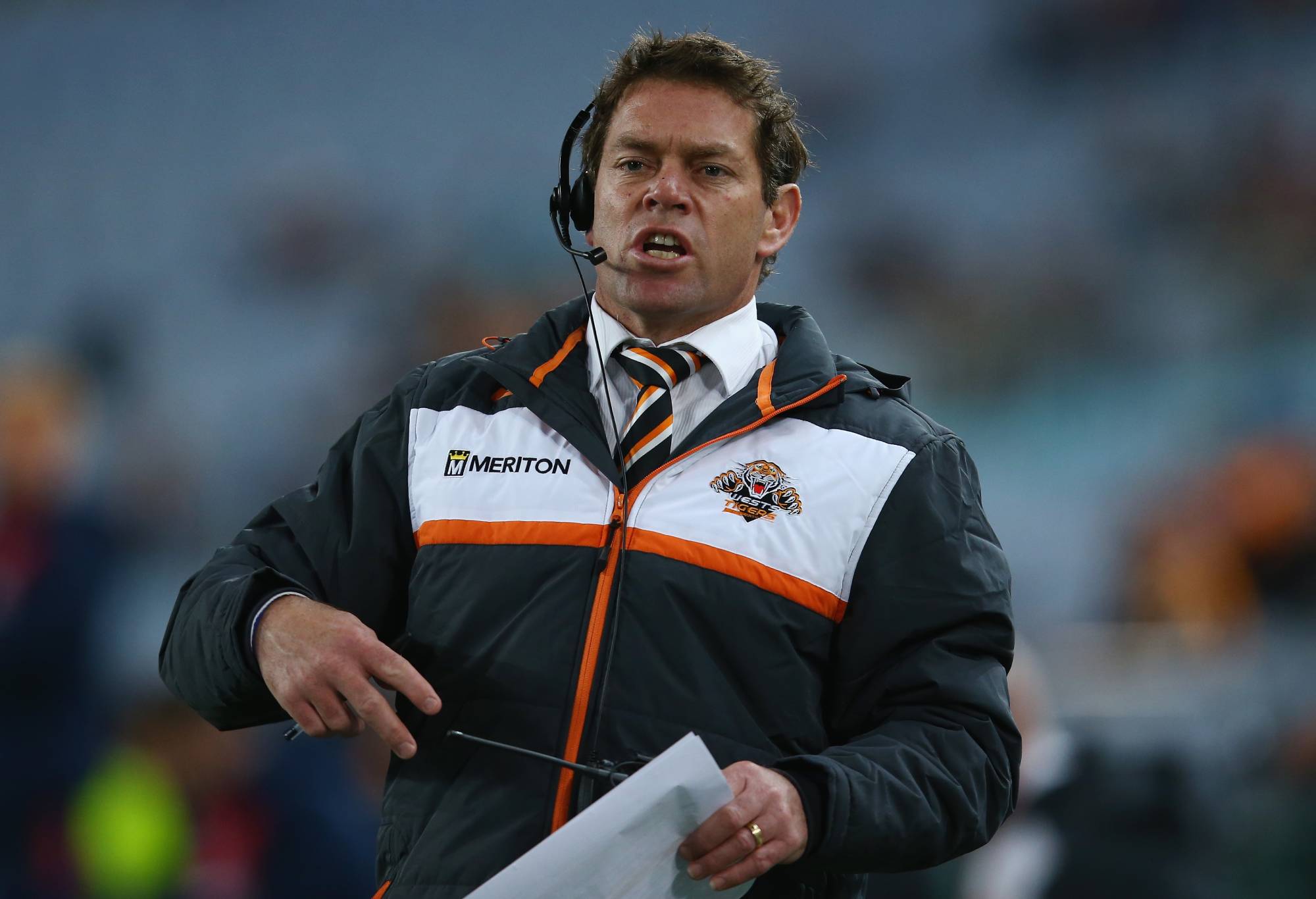 Why shouldn’t Tigers go with Brett Kimmorley as coach next year? He’s been working with the club’s pathways for a couple of years so he should know better than anyone which young stars from their massive junior nursery should be elevated to the senior ranks and, perhaps as importantly, which ones shouldn’t. Kimmorley was one of the smartest players of his generation who was always overcoming adversity of being considered the inferior alternative to Immortal Andrew Johns. He knows how to defy the odds when you’re not seen as being the best of the best – that sounds exactly what the Wests Tigers need.

Should Zac Lomax get a run at fullback? A couple of years ago he was being groomed as a potential No.1 option but after a brief run, he was switched to the centres and never given another chance. With Tyrell Sloan dropped because he wasn’t quite ready for the NRL and Cody Ramsey doing a decent job without setting the world on fire, perhaps the Dragons should try Lomax at the back over the second half of the season. It’s worked with Jake Averillo at the Bulldogs so why not give it a shot.

Is Josh Papalii finally starting to regress? You’d be forgiven for thinking big Papa is older than his actual age of 30 as he has been a fixture for the Raiders since he was a teenager in his rookie year of 2011. His average running metres per game is down to 122, the lowest it’s been since 2016, and Maroons coach Billy Slater seems to think he’s only useful in short spurts in the Origin arena, giving him just 26 minutes in Perth after 22 in the series opener.

NRL team list and late mail info for Round 23. 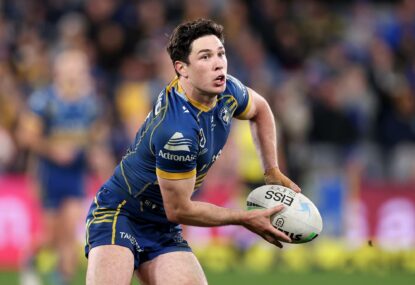 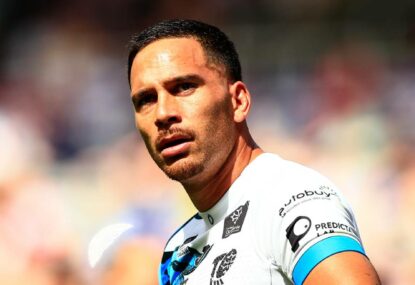 The Raiders coach received a $25,000 fine and served a one-week suspension after he labelled the Panther a "weak-gutted dog person" in his post-match… 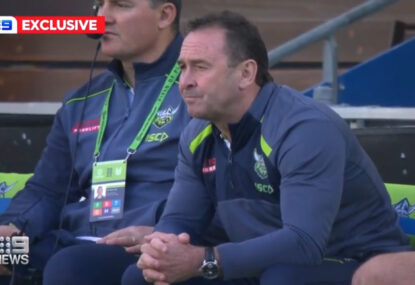 MICHAEL HAGAN: Three teams can make run at title even if they finish outside top four

There are a few teams who could still be standing on Grand Final night even if they miss out on the top four. 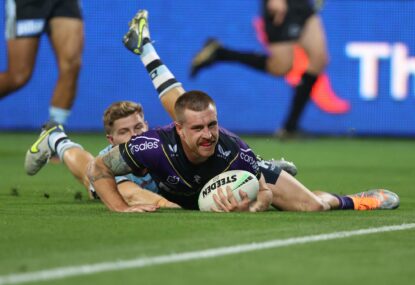 MICHAEL HAGAN: Three teams can make run at title even if they finish outside top four