The following is an excerpt from ‘The TRUTH about Rugby League’, a book revealing the secrets and lies of The Greatest Game of All.

This is told through the eyes of ‘Facebook NRL Fan’, an old school supporter who believes the game is so corrupt that it can only be purified by bringing back the NSWRL and punching.

If you haven’t heard of Origin, then you’ve probably been living under a rock in some uninhabitable wasteland like Antarctica or Adelaide. It’s the annual three-game battle between Queensland and New South Wales for the rights to Australia’s hotly-contested Eastern Seaboard, a sliver of holy land known as rugby league’s Kashmir.

Even after 40 years in existence, this concept never fails to generate feverish interest and mountains of column inches. Regardless of the state of the world, eyeballs invariably pivot to this contest fuelled by a vast spiritual and cultural divide, and other similarly hyperbolic shit.

Origin is a civil war fought between 34 of the game’s finest, a contest distinctively coined as Mate against Mate, State against State. Sounds pretty catchy, doesn’t it?

Yep, that’s because the concept is nothing more than a frothy PR STUNT run by marketing wets who are swindling your money so they can make rugby league gluten-free.

Once celebrated as the arena of the game’s gladiators – aka blokes who’d take off your head at the waist – this once-treasured contest is now devolving into something softer and more artificial than Chris Lawrence’s new mug.

Sure, there’s pockets of brainwashed ewes who still maintain it’s the ‘jewel in rugby league’s navel’ and the game’s ‘22 carat cash cow’, and to be fair, this isn’t entirely untrue. This is because more often than not, the contest is tighter than extracting a wedgie through the eye of a needle.

Many also celebrate the concept’s ability to transcend new and exciting markets, even comparing it to what Alan Bond did for yachting when he funded Australia’s 1983 America’s Cup win.

Again, this is also a pretty fair comparison – but only because much like the late businessman, Origin is also CORRUPT and DEAD.

Just because the three-game series is rugby league’s fancy cutlery, don’t be fooled in to believing it’s not immune from the game’s immoral undercurrents. Like everything in rugby league, Origin has been sapped dry by its crooked masters. Except in this case, its crooked master is QUEENSLAND.

When it comes to Origin’s hierarchy of needs, keeping Queensland happy is the concept’s number one concern. As for New South Wales, it isn’t even in the top three.

That’s right – in a two-team construct, the Blues get DOGGED in favour of ‘valued stakeholders’ such as Channel Nine, News Limited, and most precious of all, those microblogging cider-sipping poodles who threaten to walk away from ‘this barbaric sport’ because they’re outraged about a tiny bit of grievous bodily harm.

Why does the concept acquiesce to the latter, the self-righteous Twitter-dwelling practitioners of PC? At the end of the day, rugby league is built on a trusty foundation of titanium cheekbones. So why do we give a continental about the opinions of these cultured swine?

Simple. Because in the series opener of 2013, Paul Gallen rained a series of thunderous blows upon Nate Myles’ forehead in prime time – and the game has never been the same since. 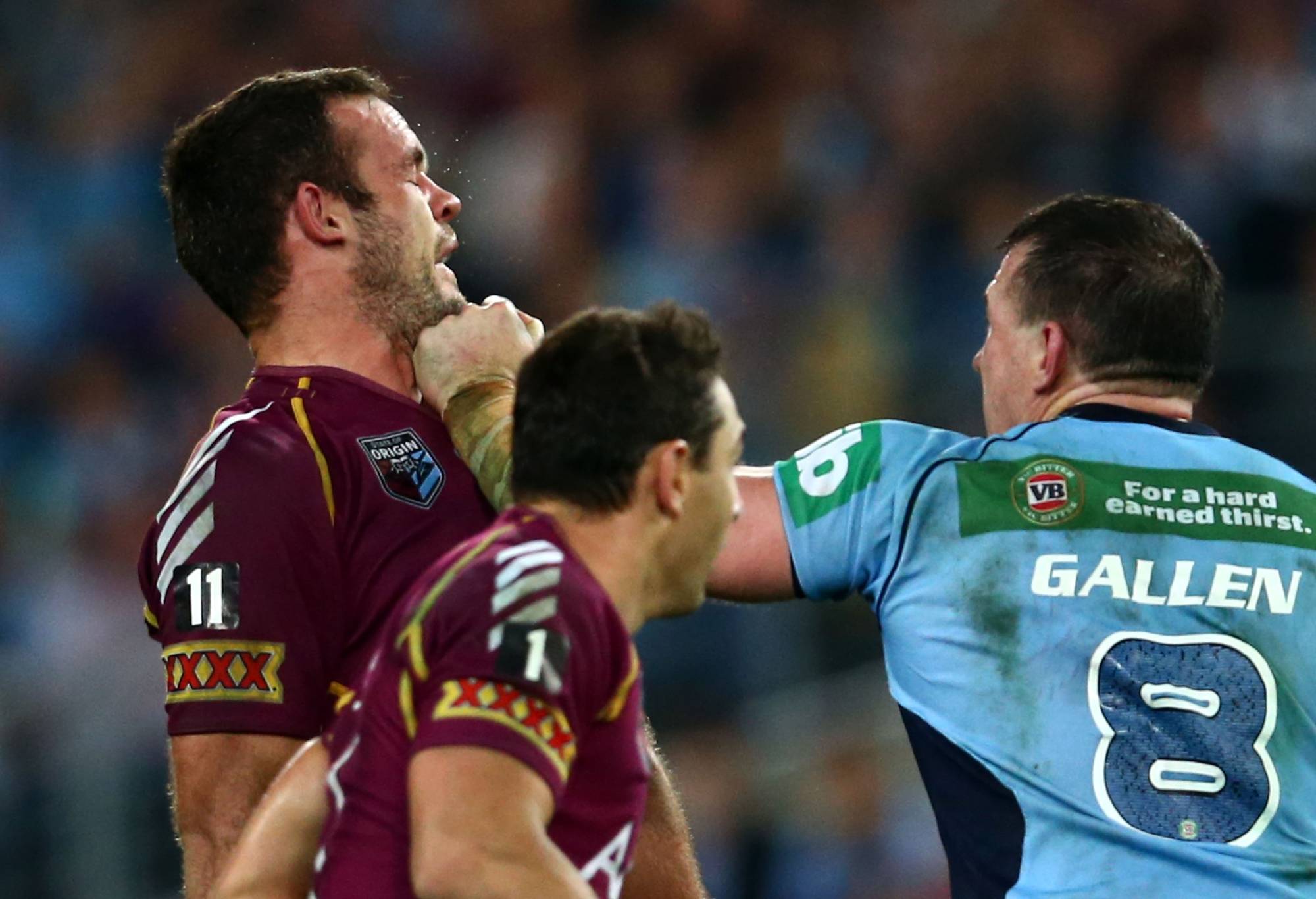 Paul Gallen of the Blues punches Nate Myles of the Maroons. (Photo by Mark Kolbe/Getty Images)

Nobody can remember why the Blues skipper punched Myles in the snot box that night. Details remain scarce to this day, apart from two agreed facts:

1. It was unprovoked, and
2. He definitely deserved it.

Nevertheless, Gallen’s flurry of hands was akin to a ferocious David Helfgott sonata, and every one of us bogans rejoiced with each violent key stroke of his gorgeous concerto. Nothing illustrates Origin more than raw masculinity and borderline criminality, and such was its virile properties, afterwards I immediately sought a pregnancy test.

But despite its unadulterated beauty, the moment was condemned by a coterie of society’s most hideous – professors, doctors, woke veggos et al – and once they inflicted their bizarre agenda against the normalisation of violence, the game was dragged forth into the 21st century with an outlaw on punching. Here, Origin was stripped of its soul FOREVER.

This has seen the interstate battle undergo a regrettable decrease in affray, whether it be in the scrums, the ruck, and even the drive past the Caxton Hotel. Yep, it’s gone SOFT. That’s why Origin nowadays is totally unrecognisable. If it stopped me to chat in the street, I’d have to make an embarrassing attempt to remember its name and probably end up calling it Terry – and it’s all because of stupid brain safety.

Regrettably, this effeminacy has now even filtered down to the PLAYERS.

Back in the day, players would get blind drunk for days prior to the match. This was not some flimsy unwritten rule of Origin, it was as obligatory as attending a team medical to have your hamstrings tested in a sexually-suggestive position by the physio while the media voyeuristically watched on in uneasy silence.

Nowadays the only thing these ‘gladiators’ are nourishing themselves on is coconut water and their own reflection. We don’t even get updates on-the-hour from the local constabulary any more. Jesus wept.

Even Origin’s qualities as a hotbed of antagonistic pre-match panto have perished. Verbal warfare has been replaced with blokes singing K-Pop, and the grumpy microwave-safe coaches of yesteryear substituted with retired hippies and fruit providores.

It’s an unavoidable tragedy, and what for? Solely to kowtow to the ‘lawyers’ and a suite of grass-fed bed-wetters who have never watched the game, and never will. Its PC gone MAD. Seriously, a little bit of chronic traumatic encephalopathy never hurt anybody, did it? I’ve never had it in my kidneys, have you?

Basically, the only thing that isn’t terminal about Origin is the ratings. This is a credit to the resilience of the concept considering the retirement of so many superstars in recent years, not to mention Channel Nine’s decision to grant hosting duties to Karl Stefanovic.

Such is Origin’s appeal to eyeballs, if you’ve lost a loved one in this great country of ours, there’s a one-in-twenty chance of finding them in front of a television on Origin night, most likely crushed to death under a pile of gambling ads.

This breathtaking pulling power is why the host broadcaster is given carte blanche to do whatever they hell they want: late kick-off times, gratuitous ad breaks, and as much blended promotion as their commercial heart desires.

It’s commonly accepted that when Arthur Beetson landed that fateful blow upon his Eels teammate Michael Cronin in the inaugural game in 1980, EVERYONE immediately agreed – this would look terrific cross-promoted with Lego Masters. And here, a long-term partnership of mutual self-interest was formed.

Want to read more on the truth about rugby league? You can buy a copy here.

Dane Eldridge
Expert
Website
Dane was named best and fairest in the 2004 Bathurst mixed indoor cricket competition. With nothing in the game left to achieve, he immediately retired at his peak to a reclusive life ensconced in the velvet of organised contests.
close