Wallabies captain Michael Hooper insists the sense of occasion is not lost on his team despite their late arrival into a subdued Perth for Saturday’s first Test against England.

In an odd twist, the Wallabies arrived in town 48 hours before kickoff, while England have been training here for more than a week.

The Wallabies have chosen to start World Cup planning early by replicating their approach for France next year – setting up a base and flying in at the last possible moment.

Hooper and unused squad members such as Tate McDermott and James O’Connor attended a public meet and greet in Perth’s Forrest Place on Friday.

He sat on a stage alongside England captain Courtney Lawes before both gave their final thoughts to media ahead of the game.

Hooper was asked about being “hidden away” up on the Sunshine Coast instead of preparing in Perth, as they did last year.

“We’ve got full access to players up there, we’ve got dedicated facilities which are pretty sharp. You’re able to walk to the gym, walk to the field, have good recoveries on site. In terms of preparation to play it’s as good as it comes,” Hooper said.

“You stay in a city, as great as it is you’re on a bus a bit, travelling to and from areas to get to places, using gyms that aren’t tailor-made.

“We don’t think we’ve been hiding, we just think it’s really a good camp set up.”

A few hundred fans in Wallaby gold met the players as the new Ella-Mobbs trophy was unveiled.

Hooper goes into the game having endured all eight of the successive losses suffered by the Wallabies against England.

“History hasn’t been in our favour for quite some time now,” he said, expecting the tourists to be ‘a tough outfit as always, with a clinical game, a powerful team and real skill and great experience.”

“We just need to get a couple of wins under the belt, mini wins in the game,” he said. “We know games of these magnitude and intensity it’s going to go back and forth quite a bit and we have to stay in the fight, throw punches, absorb then get on the front foot and apply pressure. We’ve trained hard and it was tough for Dave to pick a team.

The record, he says, is “motivation to win and turn the ledger.” 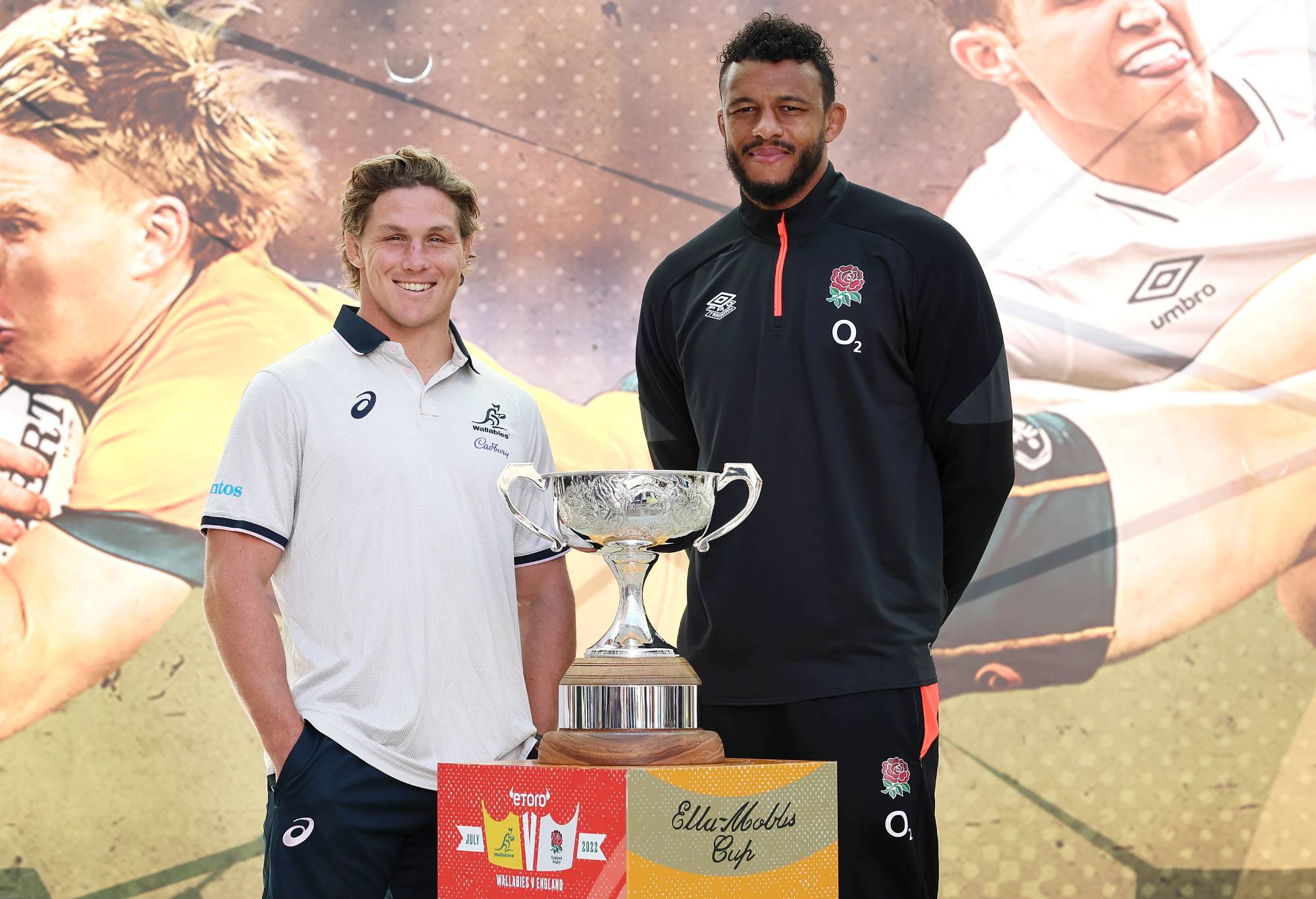 Rennie’s selection carries more experience than the outfit that ran out a year ago in the opening Test of the year, against France.

“We’re a year further into our development now, we made some good shifts last year,” Hooper said. “It’s not a reinvention of the wheel, Dave and his crew and us as players are seeing a trajectory of where we want this team to go.

“We need to evolve our rugby again and go to another level.

“We’re a different team in terms of personnel and staff. We play a different style. The game is evolving, we need to evolve with that and be cutting edge as well.”

He was asked his thoughts on England’s 23, named by Eddie Jones.

“They look big,” he said. “Test match footy demands a physical game. It’s hard, confrontational, there’s more ball in play time so there’s an athleticism on top of the brutality and the ability to repeat.

“We’ve picked a forward pack we think can deliver that, got guys coming off the pine that add some flair as well.”

Lawes was a member of the 2016 team that swept Australia 3-0 and he was named captain for this tour ahead of an upset Owen Farrell.

“It’s only a letter next to your name,” Lawes said of Jones’ decision, made to allow the returning Farrell to focus on playing at 12.

“There’s certainly more than me as a leader in the team and that’s what we need. It’s not just going be me making noises on the field. It’s obviously great to be able to contribute as much as I can to the team and being in this role is certainly something I cherish.”

He said he had been working closely with Farrell.

“The first conversation was absolutely fine as I knew it would be. If I’m honest, I expected him to get the role back and I was more than willing to. We work so well together. We’re almost polar opposites but in a good way. We find a pretty good balance. It’s just I’ll keep the armband and we’ll see what happens going forward.”

He gave an interesting insight into his relationship with Jones as well, saying there had been a “massive” change in the coach since 2016.

“I certainly wouldn’t be skipper if he was still the same coming into this,” Lawes said.

“We’re making a lot of changes. We’re trying to find that balance between what we had then in 2016, which was massive but was hard to maintain, and what we had in 2019 when we’ve got to the final of the World Cup, but we couldn’t quite get there.

Eddie wants to challenge himself. And if I’m honest, I’m probably skipper because I think differently to him, and I’m willing to challenge him as a leader. I think that’s why he’s kept me on and I think I make quite a lot of the lads comfortable around the team. That’s the kind of team environment we want.”

Lawes wouldn’t talk examples of how he had challenged Jones except to say, “just in terms of things of what’s best for the team. Training wise, what we need from the week, I’m more than willing to essentially get a feeling of what the team needs.

“And then obviously the coaches have a opinion on what the team needs and we’ll come to a compromise instead of it being all one way.

“The game’s developing and as a leadership team, and as a coaching team we think that’s the best way to be.

Australia have two rookies in their pack with Dave Porecki’s nerve to be tested at the lineout and Cadeyrn Neville up for a battle in the scrum.

“I know they didn’t think they fired any shots in that game and I’d be surprised if they didn’t throw the kitchen sink at us tomorrow.”