Trent Robinson has taken aim at referee Gerard Sutton after the Roosters were on the wrong end of an 8-3 penalty count in their 26-18 defeat to Penrith.

Two incidents displeased Robinson – one a penalty in the dying moments of the first half, where Sam Verrills was adjudged to have tipped Scott Sorensen beyond the horizontal despite hitting him around the knees; the other a sin-bin on Angus Crichton where the ref played an unusually long advantage before coming back to dismiss the Roosters forward.

At the point of the Verrills tackle, the score stood at 8-6 to Penrith and the Roosters had repelled multiple sets on their own line.

Had they made it to half time with just a two-point deficit, it might have been a different game. Instead, Viliame Kikau scored through an exhausted defence.

“That’s a horrible decision,” said Robinson of the incident.

“There were so many poor decisions. We had the same referee last game with 30-odd offsides and it was a 3-1 penalty count.

“It was every opportunity: we had Sam Verrills’ one, and the sin-binning. We’re not playing rugby union – you either stop the game and send him off. You don’t give them opportunities (to play on).

“You can call Yeo and Cleary constantly but if you don’t penalise, you end up with 28 per cent position. It wasn’t a good enough performance tonight.”

James Tedesco was also unhappy with the officiating.

“We were defending our line so well and then we’d just get a penalty against us,” he said.

“It was frustrating that we kept giving them possession through penalties and we weren’t getting anything back.

There wasn’t much explanation for it, it was just penalties again. It felt like we’d defend six tackles and then they’d get a penalty. After three or four in a row, it kept them in the game.

“I thought our D was so good but it’s hard to defend three or four sets in a row, let alone against the best team in the comp. It’s frustrating.”

The result has all but secured the minor premiership for the Panthers. With Melbourne’s loss last night at Manly, Penrith would have to throw away a three-win advantage not to finish top of the tree come September, and with a 15-1 record thus far, that seems very unlikely.

The Roosters, meanwhile, now sit tenth, barely believable given their performance here. They matched the reigning premiers blow for blow.

“I was really proud of the guys tonight,” said Robinson.

“They attacked the game. It’s a sad dressing room there because they know how hard they worked and what kind of a team they were. We have to take a breath, come back and do some work.

“The boys showed a lot of ticker. We dominated the physical battle in the game and we’re really disappointed to lose.”

Few have rattled the Panthers as much as this, especially on their own turf. Only the Eels, who won at the foot of the mountains, have caused so many problems.

The Roosters led midway through the second half and, on another night, might well have won.

It was a high-quality affair, with both sides producing their best frequently to challenge each other and, indeed, bring the best out of each other.

Penrith had their usual highlights. The back three ran for the bulk of their metres, Nathan Cleary kicked long and accurately, and James Fisher-Harris led through the middle. 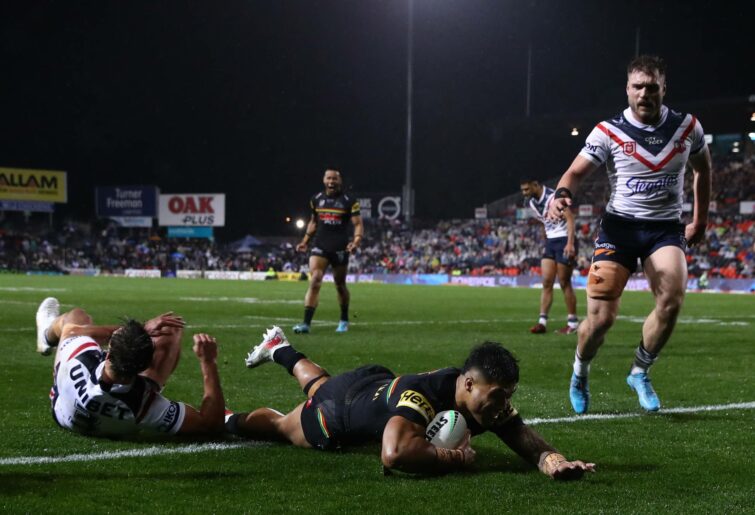 Brian To’o of the Panthers scores a try. (Photo by Jason McCawley/Getty Images)

On the flipside, the manner in which the Roosters repeatedly turned the best attack in the comp away, and then shifted pressure in their own favour, was superb.

“We left a couple of points out there in the first half, but credit to the Roosters who defended well,” said Ivan Cleary after the match.

“It turned in the second half and they put a couple of tries on. It was a good tough game. We had the better of the half and eight points was probably more reflective.

“It was a bit different to what we’ve faced this year. I can’t remember having to come back in the second half.

“I thought the Roosters were really good tonight, which you expect any time you play them. We thought we’d need a little bit more in tonight’s game and that was certainly the case.

“Even when we were 18-14 down, I thought they were defending their line really well. There was a lot of intensity in the defence, so I was happy that we manage to break that and get in front.”

Joey Manu had an up and down game in his first appearance in the halves, with some excellent attacking offset by errors and defensive penalties, but showed enough to be persisted with.

Sio Siua Taukeiaho was immense in the middle, knocking out 180 metres with ball in hand and making 24 tackles, including a superb try-saver on Brian To’o.

At the other end of the size scale, Sam Walker, shifted to halfback to accommodate Manu, kicked for 555 metres and dictated play. While it barely requires mentioning at this point, James Tedesco was excellent too.

Manu’s first appearance in the halves began inauspiciously with an early knock-on, though he wasn’t helped by his teammates.

After a series of errors and penalties, the Roosters were perhaps lucky that the Panthers opted for an early two points ahead of attempting something more serious.

Manu then knocked on again – this time, admittedly, trying to field a dangerous kick – and his side were not as fortunate a second time. Penrith unveiled one of their trademark scrum base plays to send To’o in.

The poor start from the Chooks would get yet worse. They made an error in midfield and Api Koroisau pounced, making a quick break before finding Jaeman Salmon with an offload.

He couldn’t make it to the try-line, but after a delay for advantage, the bunker spotted some Crichton on Crichton pulling in backplay, and sent Angus to the bin for a professional foul.

The Panthers had thrown everything at them, but were repelled repeatedly; indeed, despite the man disadvantage, it was the Roosters who scored next.

Naturally, it was Manu who created it. The newly-minted half spun and broke tackles in the middle of the field, produced a back flick to Tedesco, and he found Walker rushing on his inside to score.

It would be against the run of play. The black wave returned with a vengeance, but the Roosters goal line defence – shaky at times of late – stood firm.

Izack Tago opted against putting Taylan May in with a chance at the corner, before Tedesco and Taukeiaho produced consecutive try-savers to keep the deficit at two points.

In the end, it was quite cruel that the hold-out didn’t last until the break. Verrills was pinned for a tip tackle despite a very low body position, and the last burst of pressure was too much.

As the clock wound down on the first half, Kikau – who had suffered his own personal melodrama, with a HIA and a potential arm injury – crashed through a tired Egan Butcher to get one late for Penrith.

Manu’s kicking was able to kick-start the Roosters in the second half, forcing Dylan Edwards into a mistake at the back, before Walker’s own boot generated two repeat sets.

The Panthers couldn’t deal with the pressure and Taukeiaho was able to find the perfect line across Liam Martin to bring the Roosters right back into the contest.

Penrith have rarely been under the pump like this in 2022. Another repeat set forced them back, before Manu smuggled a ball untidily out of a tackle for Verrills, who went low at the line and just about got the ball down.

As soon as they went behind, the Panthers fired up again. The first ten minutes of the second half had seen an 80/20 possession split for the Roosters – the next ten saw that reversed.

Manu was again at the heart of it, albeit negatively: he was twice offside to bounce Penrith into position, from which Cleary found Tago with a superb flat pass to return the hosts to the lead.

The halfback was suddenly controlling everything. He fired a kick in behind that Walker made a mess of, but grounded with his torso to avert disaster at the last. It didn’t matter.

Victor Radley lined up a huge shot on Fisher-Harris, but as the Roosters reshuffled, the Kiwi prop got a quick play the ball and Koroisau darted in from dummy-half.

It was a soft way to end a tough performance. Penrith edged it in the end, but the Roosters could leave with heads held high.