30 years ago, Luke Parker would have considered himself lucky to leave the MCG alive.

After the Sydney co-captain’s infamous taunt of Dylan Shiel – and by extension, all of Essendon – in the Bombers’ insipid 58-point loss back in Round 9, the consensus of the footy world was that Parker would be in for a tough Saturday afternoon.

Jordan Lewis urged the Dons to make a statement, saying the fans would be let down if they didn’t assert their physicality on the number 26. Matthew Lloyd had already made his feelings clear, saying seven weeks ago Shiel should have ‘ploughed through’ Parker in response.

The Bombers had already run a similar race – they were more focussed on dishing out hits than actually playing footy against Richmond a week after the Parker incident.

Only once did the Swan receive any outside the norm treatment – a brief skirmish with Sam Durham early on, by which time he’d already amassed 10 possessions.

This time around, they didn’t get bitter – they got better. The result was far and away the Bombers’ most exceptional performance of the season, and quite possibly their finest under Ben Rutten period.

Showing the gumption to overturn a 26-point deficit early in the second quarter with a flurry of goals amid free-flowing football, and resilient enough to again come back from a deficit deep into the final term and kick five of the last six goals, it was the second reminder in three weeks that this Bombers side, for all their struggles in 2022, have a bright future ahead of them.

It’s now clear, as it was in their wins over St Kilda and Hawthorn, that this team’s best chance of victory is to take the game on, utilise their explosive speed from half-back and through the middle, and hope that their limited kicking skills hold up.

It’s far from perfect – stirring wins like these are pretty much the high water mark at this rate, and the downs can be just as severe – but it means the Bombers can look a million bucks when it all clicks. In the second half of the second quarter, and the final ten minutes, it clicked.

The most impressive aspect of it was the Bombers’ improvement at the source – rather than spending their energy sticking it to Parker, they focussed on winning the ball, and harassing the Swans into submission when they couldn’t.

Last time they met, the Swans had 394 disposals, controlling the football with ease via a whopping 117 marks. This time, they touched it just 298 times. Really, it’s only down to the Bombers’ still-flaky defence that they came close.

Up forward, they have the weapons to make this a worthwhile venture. Give Peter Wright a clean run at the ball and a one-on-one contest, and he might as well be Tom Hawkins. Seven marks meant more than his two goals for the night, as he continually provided a strong target to kick to.

Shiel himself was more subdued than he has been in a terrific last month, but six crucial clearances – more than any other Bomber – and a few examples of explosive speed showcased just what he brings to the table at AFL level. His skill errors, too, are more forgivable when going flat chat towards goal and banging it towards a contest, rather than trying to pinpoint a sideways kick playing slow footy.

Even more enigmatic, and even more important to the Bombers’ performance, was Sam Draper. At times, he resembles a flamingo on stilts with a mullet, and it’s probably not a coincidence that the Bombers chose to name another ruckman in Andrew Phillips as medical sub.

But against a quality opponent in Tom Hickey, Draper easily took the honours in the big man department. Some excellent tap work, and a bullocking presence around the stoppages, meant the world for his teammates, and ensured a lethal but occasionally fragile Swans midfield was made to work for every clearance.

As the game swung, so too did Parker fade out of the game. Enormous early in his milestone game with 11 first-quarter possessions, he was seldom given that much freedom to move from therein. 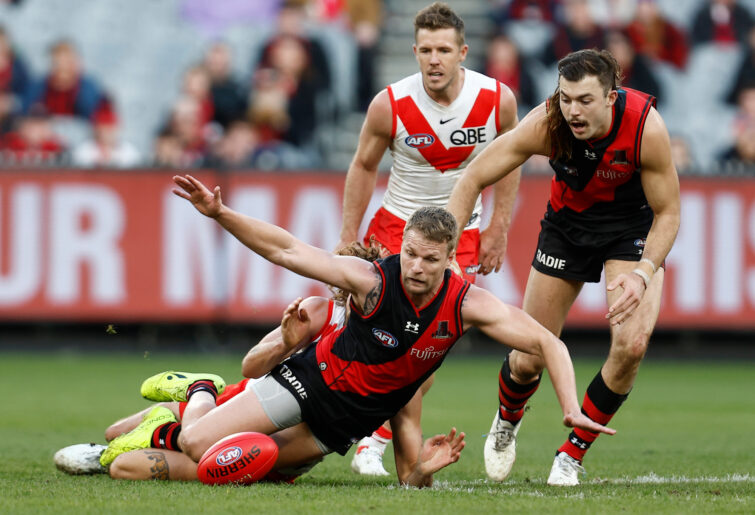 Neither was Errol Gulden. Roaming the wing and delivering with his usual laserlike precision in the first term, the young star had nine touches by quarter time, just about all of them elite.

He’d be slowly suffocated out of the game by the Bombers’ pressure, as they refused to let the Swans gain ground with their usual precise kicks through the middle. In Round 9, they’d made only 55 turnovers for the night, with Essendon basically allowing them to do as they pleased with only 30 tackles for the afternoon. On Saturday, that figure rose to 66 – and the Bombers made them pay.

The Swans’ only option to go inside 50 became explosiveness from the centre – which, thanks to an incredible performance from Chad Warner (25 disposals, three goals) nearly proved enough.

There mightn’t be a better barometer in the game than Nick Hind for the Bombers. For the second time in three weeks, he was the best man afield, given freedom by Rutten to use his running power to full advantage.

Only Warner pipped his 682 metres gained for the match; together with captain Dyson Heppell, who seemed to be staring footy mortality in the face back in Round 9, the Bombers took the game on – and lady luck smile on them.

Were they fortunate? Absolutely. The Swans kicked themselves out of this, just as Carlton did on Friday night.

Tom Papley would have expected to nail every single one of his three behinds for the night; especially early, the Swans missed a massive opportunity to kill the contest quickly. You never give a sucker an even break.

In contrast, the Bombers could not miss. With three goals from his 24 disposals, snapping from contests like prime Steve Johnson, Zach Merrett had an infinitely more meaningful afternoon than any 38-disposal, 24-handball performance from the first half of the year.

Jake Stringer made two difficult shots in the last quarter look ridiculously easy to wrest the match back on the Bombers’ terms just when it seemed like it had slipped away.

We’ve long since given up hope of Stringer become a sure-fire member of the elite class, but he has always been pure essence of matchwinner. Perhaps only Dustin Martin could be relied upon to nail the 45 metre banana he sent sailing through to give the Bombers life in the last quarter.

As for the second goal, a sprinting effort from 35, you’d have to go back a year or two for Dusty to be capable of that.

The killer blow couldn’t have been symbolic. Parker, the pantomime villain, hacked desperately away from a stoppage deep inside defensive 50, with Bombers hanging off him.

The ball spilled to Hind, who accelerated in a flash, found the space he needed, and sent the match-winner sailing through with pinpoint precision.

The Bombers could have been bitter. Instead, they chose to get better.