The All Blacks overcame a slow start to beat Ireland 42-19 crossing for six tries to three and showing some stout resilience in the opening Test of their three match series at Eden Park.

The hosts were deserved winners, preserving a 28-year streak at their fortress, but could face an unpleasant aftermath if the judiciary decides to look at an incident involving Scott Barrett late in the game when he hit Ireland captain Peter O’Mahoney.

The incident drew no attention from the TMO.

Rugby correspondent Delme Parfitt said: “The ref is three metres away staring at it. I mean what is he there for if not to deal with things like this? Red. Red. Red. All day.”

South African rugby writer AP Cronjeadded: “The referee is two metres away, unobstructed, looking directly at the ruck. If you can’t make a call in that situation then you never will.

“Dereliction of duty by the entire refereeing contingent. If the referee somehow misses this – which by some inexplicable miracle he did – then the TMO shouldn’t. The compression of the neck is sickening. Barrett doesn’t even make an attempt at a proper clean.”

The hosts took some time to get into the game and the Irish struck the first blow, Keith Earls crossing for the opening try of the series on five minutes after 18 phases of strong forward play. Ireland could have easily gone further ahead but for a crucial intervention by Beauden Barrett.

For a while the ABs were under enormous pressure, unable to meet the Irish attack quickly enough at the gain line.

But on 20 minutes, after being outplayed comprehensively, the ABs got back into the match. Ofa Fainga’anuku drove close before Aaron Smith’s crisp delivery cut out Beauden Barrett and found Jordie Barrett for the AB’s opener.

Ireland came back strongly but were shocked when Robbie Henshaw’s rushed pass to James Lowe fell loose and Sevu Reece picked it up and roared 80 metres down field for a try.

Making matters worse, Jonny Sexton, the Irish captain, copped a knee to the head in the build up to that poacher’s try and failed a HIA to be ruled out for the rest of the game.

The ABs were on top now and BB set up a third when they he kicked in behind the Ireland defence line and Quinton Tupaea was marginally onside and ran through for a try under the posts.

Ireland were desperate for the relief of the dressingroom, but worse was to follow. It was the excllent Smith again who sparked the next try. He had a chip and chase and managed to push the ball back for Ardie Saves to storm up in support and score.

Ireland began the second half as they had the first but after a well worked try to Garry Ringrose the ABs were back in control, a breathtaking step and try to Savea a highligjht before Pita Gus Sowakula marked his debut with a try after a series of scrum penalties. 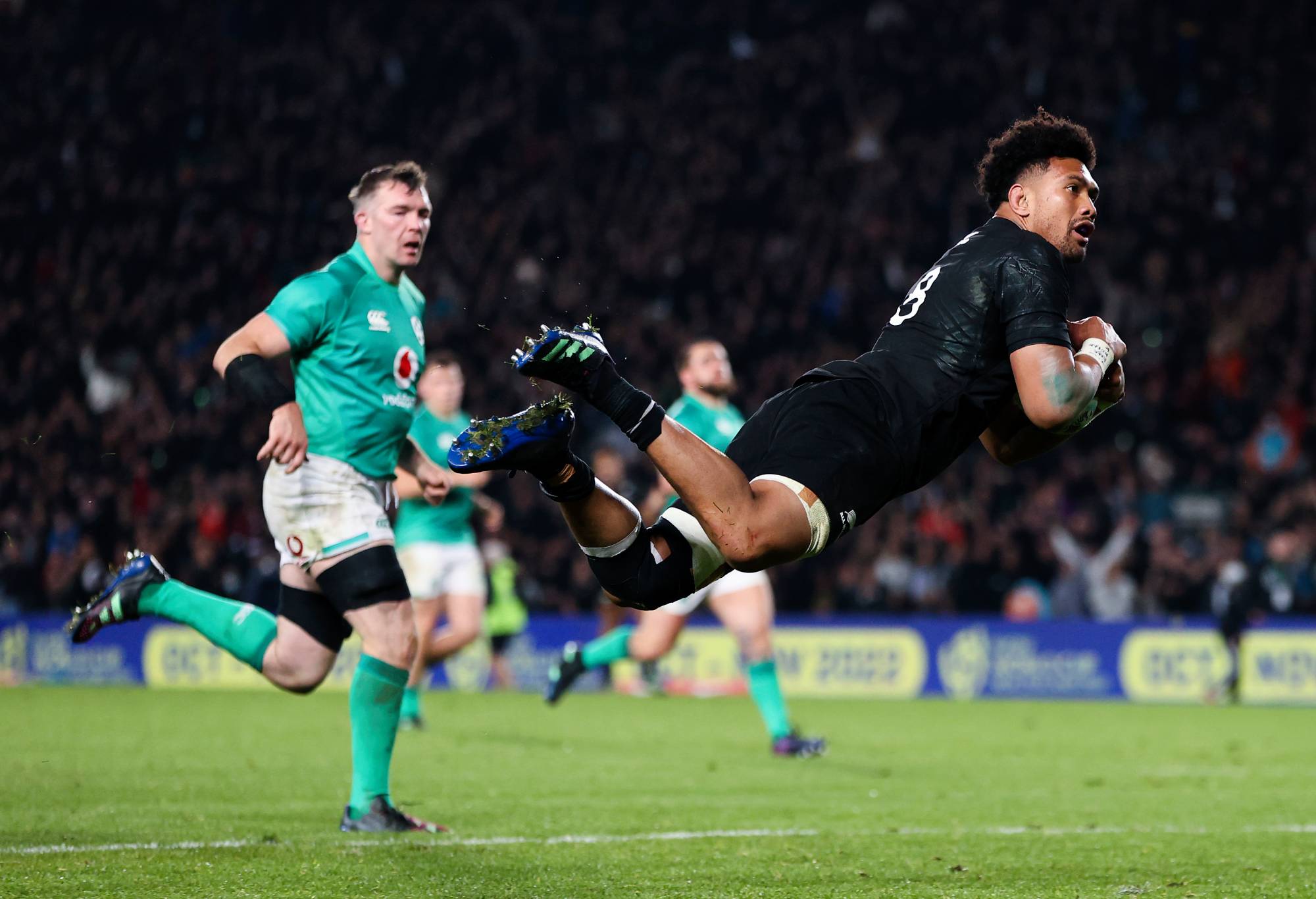 Ardie Savea of New Zealand scores a try during the International test Match in the series between the New Zealand All Blacks and Ireland at Eden Park on July 02, 2022 in Auckland, New Zealand. (Photo by Phil Walter/Getty Images)

Ireland responded but too late, and again the ABs were tough to crack.

“This eagerly anticipated Test match delivered. Ireland played their part big time they had the All Blacks under the pump for the first 20 minutes we saw after that a response back from the All Blacks and they really took the game away from Ireland,” said ABs great Jeff Wilson.

“In the second half they came out and delivered again, Ireland, and then just a couple of moments of individual brilliance from the All Blacks.”

“The boys defended really well right to the end which is really pleasing.”

O’Mahoney said his team would take confidence from their efforts.

“We started very well, got into our flow nicely, but a couple of mistakes and a couple discipline and against a side with the quality that the All Blacks have they punish you,” he said.

It will be a result that’s especially pleasing for Ian Foster, who came under fire when the ABs were beaten by Ireland in November. His buildup was disrupted when he suffered Covid and was forced to hand over the reins to assistants including former Ireland coach Joe Schmidt.

“It wasn’t ideal by any means,” Cane said of the disruptions to coaching staff and loss of three teammates.

“But this group has been through a lot in the last 18 months and I think it probably put us in really good stead for this week in terms of rolling with the punches.

“We’re a group that’s been together for a while with some some good experience. We had a really good week considering all that went on.”