Jai Opetaia has fought for 10 rounds with a broken jaw to become Australia’s only male world boxing champion in one of “the most brutal fights in Australian boxing history”.

The underdog could only mutter that it “feels good” to beat Mairis Briedis and claim his IBF and The Ring cruiserweight world title belts after a brutal 12 rounds at the Gold Coast Convention and Exhibition Centre.

Opetaia has never been one to lead with his mouth though; an Olympian at 16 he is now world champion at 27 after a unanimous points decision that marked just the second loss of Briedis’s 30-fight professional career.

It was revealed by doctors in an emotional dressing room that his jaw had been fractured on both sides of his mouth, first on one side in the second round and then again on the other side later in the fight.

Opetaia went straight from the stadium to the emergency department and will likely have two plates attached in surgery on Sunday and face at least three months out of the ring.

He said “he felt it crack” after a Briedis uppercut, manager Dean Lonergan labelling it one of “the most brutal fights in Australian boxing history”.

“And one of the all time great performances, not only of Australian boxing, but Australian sport and we should be celebrating him for a long time to come,” he said.

“That was just stunning and he should be celebrated as an Australian hero and I hope he gets the accolades he deserves.

“This was always his breakthrough fight, now he’s broken through.

“That’s one of the all-time great performances, against the very best in the world. All you do (to promote his next fight) is put it on. He showed everything.”

Briedis marched straight out of the ring after the decision – judges awarded Opetaia the fight 116-112, 115-113, 116-112 – later congratulating him in the dressing room and asking for a rematch.

Briedis was surprised to hear Opetaia had suffered a broken jaw so early in the fight, before revealing his nose was broken, “so that makes it one-all”.

“Did you enjoy this fight?,” he asked media, accepting of the officials’ decision. 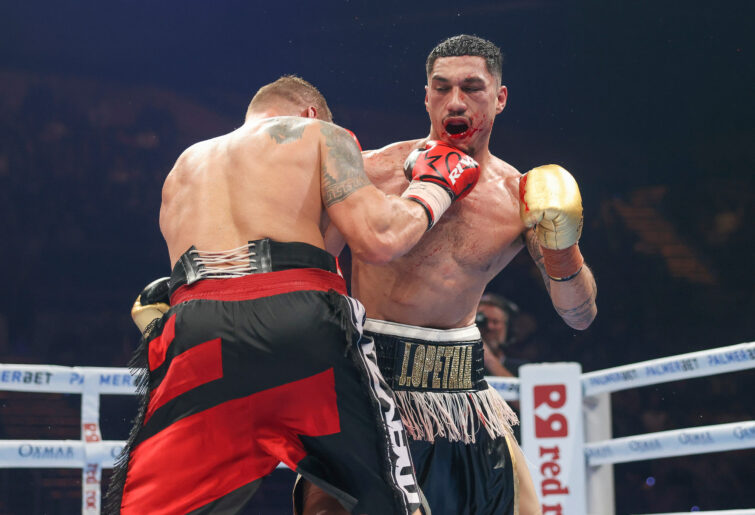 Jai Opetaia (right) gets hit in the jaw during his IBF cruiserweight title fight against Mairis Briedis. (Photo by Peter Wallis/Getty Images)

Opetaia, dubbed the toughest Australian boxer by Jeff Fenech, was lucky to even be in the ring after a freak rib injury in April delayed the bout and left doctors scratching their heads.

Dr Andrie Stroebel told AAP that he’d never seen anything like it, the surgeon using “3D rib clips” to fix his torn cartilage back to the bone before it was pummelled again by Briedis.

Only current heavyweight world champion Oleksander Usyk had beaten the 37-year-old Latvian, who surged back into the fight in the final five rounds after Opetaia had started well to bloody his nose and close his left eye.

Several big blows rocked Opetaia in the 10th round but he steadied and the pair stood and traded blows in an epic final round, as only then the damage to Opetaia’s jaw became visible.

Keen to fulfil a promise to his late grandfather to claim the WBO belt, Opetaia was greeted by a challenge from current champion Lawrence Okolie.

“He’s gotta enjoy the belts but OMG, what a fight had just been set up. Imma show Briedis how it’s f***ing done,” he tweeted.

It left him motionless on the canvas for more than a minute before he stirred and exited the ring on his feet.