“Abject, humiliating, chastening, scruffy” … Eddie Jones and his England players were smashed by the nation’s media after botching their opening rugby Test against the 14-man Wallabies in Perth.

Predictably there was no love for besieged Jones with patience fast running out after an inglorious Six Nations campaign ahead of next year’s World Cup in France.

“Ignore the two-point deficit. This was as chastening a defeat as England have suffered under Eddie Jones against a 14-man Australia team over whom he used to hold a rod of Eucalyptus wood,” wrote The Sunday Telegraph’s Daniel Schofield.

“There have been heavier losses under Jones but this was a microcosm of all that has been wrong with England since the 2019 World Cup.

“Shapeless in attack, porous in defence and comprehensively beaten up at the breakdown and scrum by an Australian team that played more than half the game a man short after Darcy Swain’s red card.

“This follows hot on the heels of losing to a Barbarians team that played most of the match with 14 men. A theme is emerging and it is not encouraging.”

The Sunday Times’ Alex Jones said the RFU’s “blind loyalty” to Jones will be tested to the extreme now.

“Now this. Australia were in disarray. They had lost Quade Cooper to injury five minutes before kick off and two more players – Tom Banks and Allan Alaalatoa – inside the opening half hour.

“Darcy Swain was then sent off for a head butt on Jonny Hill, with whom he had had a running feud – and yet England were humiliated again. They lost having held a 14-9 lead after 61 minutes.

“Australia grew in adversity. They won all the key moments in the final quarter and overwhelmed England with tries from Jordan Petaia, Folau Fainga’a and Pete Samu to seal the game; accurate and ruthless where England were scruffy and toothless when it mattered.”

“Do not be fooled by the final scoreline,” the Guardian’s Robert Kitson wrote in his match analysis. “This was a far worse performance than a two-point defeat. There can be no excuses for England. Those signs of progress that so ‘encouraged’ the RFU in March remain hidden to the rest of us.”

It was a nightmare result for Jones all round: “The more he tinkers with the chariot – a new captain, a reshuffled side, different lieutenants – the less sweetly it seems to move,” Kitson said.

“Something fundamental is not clicking, despite the best efforts of his new skipper Courtney Lawes, Ellis Genge and Freddie Steward. Once again England gave away daft penalties at crucial moments and, as against the 14-man Barbarians last month, did not have the wit or dynamism to maximise their numerical advantage.”

Kitson said it was too soon to write off England’s chances in the remaining two Tests in Australia.

“If it is fractionally too early to write Jones’s squad off completely they have now lost three Tests in a row and remain as far away as ever from the ‘greatest team ever’ that the coach was targeting a couple of years ago,” he wrote.

“There continues to be clunkiness where there should be rhythm and Australia have now overtaken them in the world rankings. A 3-0 series defeat here and Jones’s insistence that all will be fine at next year’s World Cup will start to ring about as true as Nadine Dorries’s fondness for rugby league.”

“England sunk without trace alongside the banks of the Swan River,” wrote the Daily Mail’s Nik Simon.

“This was a horrendous homecoming for Eddie Jones. Everything that could have gone wrong for Australia went wrong. It should have been plain sailing for England but instead they sunk without a trace,” he declared.

“Just as they did during the Six Nations, England failed to execute in attack – bar two late consolation tries for Henry Arundell and Jack van Poortvliet. They allowed the broken hosts to stay in the game, before choking when the pressure came on in the second half. 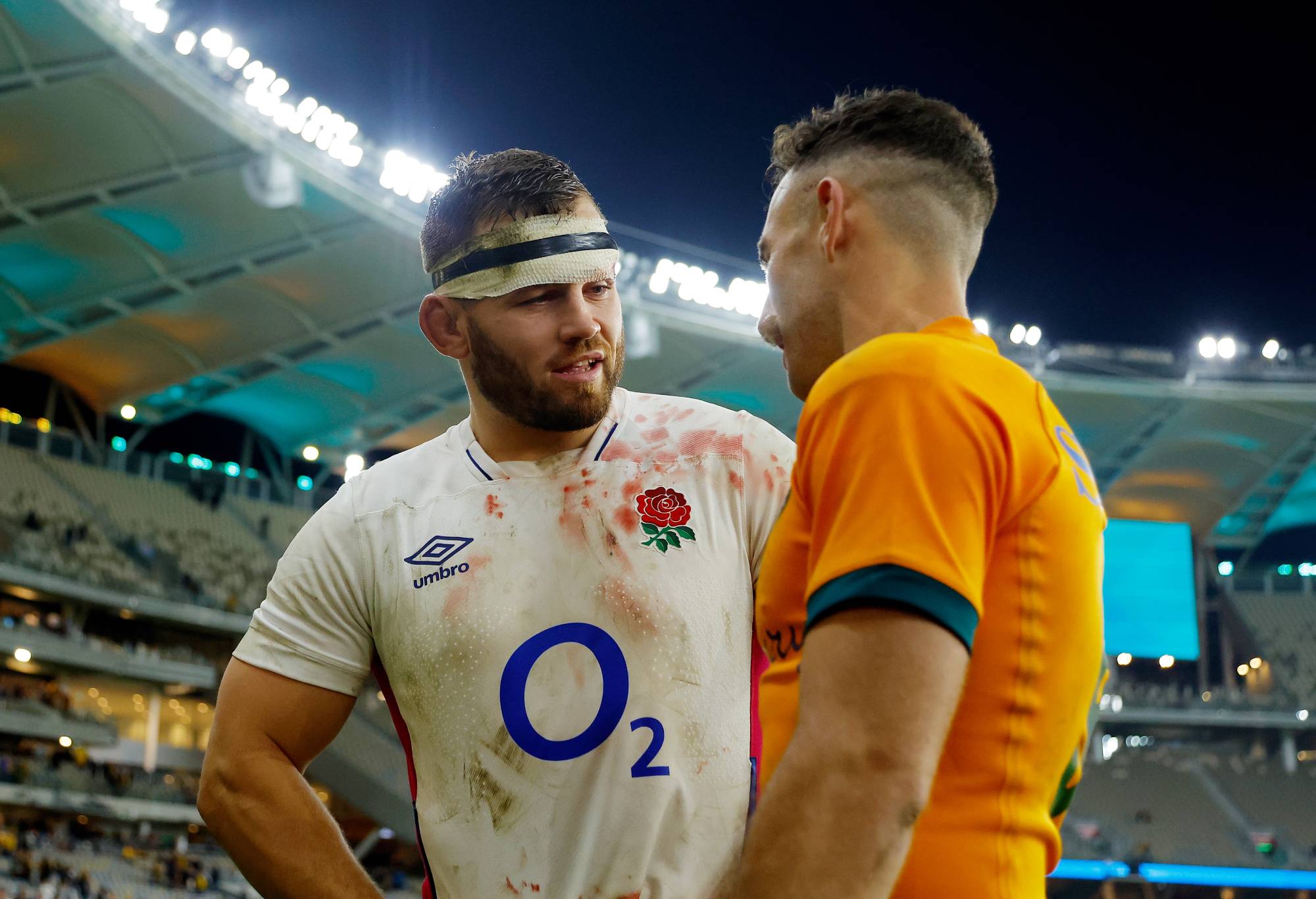 “There was a glaring failure in discipline and game management, with England suffering a fourth straight defeat, cranking up the pressure on Jones.

There have been heavier losses under Jones but this was a microcosm of all that has been wrong with England since the 2019 World Cup.

“Shapeless in attack, porous in defence and comprehensively beaten up at the breakdown and scrum by an Australian team that played more than half the game a man short.

“This follows hot on the heels of losing to a Barbarians team that played most of the match with 14 men. A theme is emerging and it is not encouraging.”

For his part, Jones accepted responsibility for the defeat, but claimed that the ‘history’ of the game suggests referees will always try to ‘even up’ encounters after showing red cards.

“That always happens, Jones said. ” You look at the history of the game, whenever you get a red card the referee evens it up. That’s normal and we’ve got to be good enough to handle it.

”I’m not criticising the referees, I’m not using it as an excuse, that’s the reality of rugby. He evens it up. He helps the team with the red card.”

“We’re our own worst enemies at times,” George said on the BBC Radio 5 Live’s Rugby Union Weekly: “We probably gave them that game.

“We had a great opportunity to win it. We didn’t throw a punch, which is just so disappointing.”