New Zealand Warriors have had a happy homecoming to Auckland with a hard-fought 22-2 victory over the Wests Tigers.

Having gone 1,038 days between home fixtures, there was always going to be a mountain of pressure on the Warriors, with Mt Smart Stadium sold out a week in advance.

Fortunately for the home fans, the locals arked up, with hefty carries and solid defence to limit the Tigers to a sole penalty goal.

“We’ve had a lot of good support away, but there’s nothing like the support we get here,” said returning captain Tohu Harris, who scored the first try back after the long break. “Every single person was following and supporting us; it meant a lot and gave us a lot of energy.”

The crowd was electric, perhaps too much so: there were multiple pitch invaders, shoeys in the stands and emotional scenes at the end.

“I’m very happy, compared to the previous month or so,” said interim Warriors coach Stacey Jones. “It’s been a great week coming home and the excitement around the game…to put in a gritty performance I thought, it capped off a great week.”

On the field, it was a grinding, defence-first fixture that was, politely, one for the rugby league purists. If you like hard runs and hits, then this was the game for you, even if it came at the expense of flair.

For New Zealand, the plan was simple: hit up the middle, kick to the corners and then tackle everything that moved. With Chanel Harris-Tavita deputising at fullback for Reece Walsh, so often their most creative player but sidelined with Covid, it was always unlikely that they were going to play with much adventure.

They relied on the accumulation of pressure and the kicking of Shaun Johnson to create opportunities. His connection with Dallin Watene-Zelezniak was worth two of their tree tries.

The Tigers had the same idea, completing as high as 86%, but struggled to make anything happen in attack. The Warriors defended superbly but were not asked enough questions.

Kiwi rugby league fans had missed the sport, and it was as if both teams decided to give them maximum entertainment from the off.

Aaron Pene took the first carry with venom and was hit back, with his teammates joining in to almost create a maul. Two plays later, Wayde Egan broke through and would have put Harris-Tavita under the posts, had the late call-up not slipped. Jazz Tevaga took another hard carry and ended up with a HIA, and that was all in the 60 seconds.

Once a pattern set in, it was all Warriors. They’re a team that struggles to score points and it told, with the Tigers able to tackle out a first ten minutes that saw six Warriors sets to Wests’ one.

The weight of pressure seemed to have told when Egan burrowed in from dummy half. The try was given and the crowd went wild, but bunker official Kasey Badger pooped the party, calling – correctly – that the ball had not been grounded. 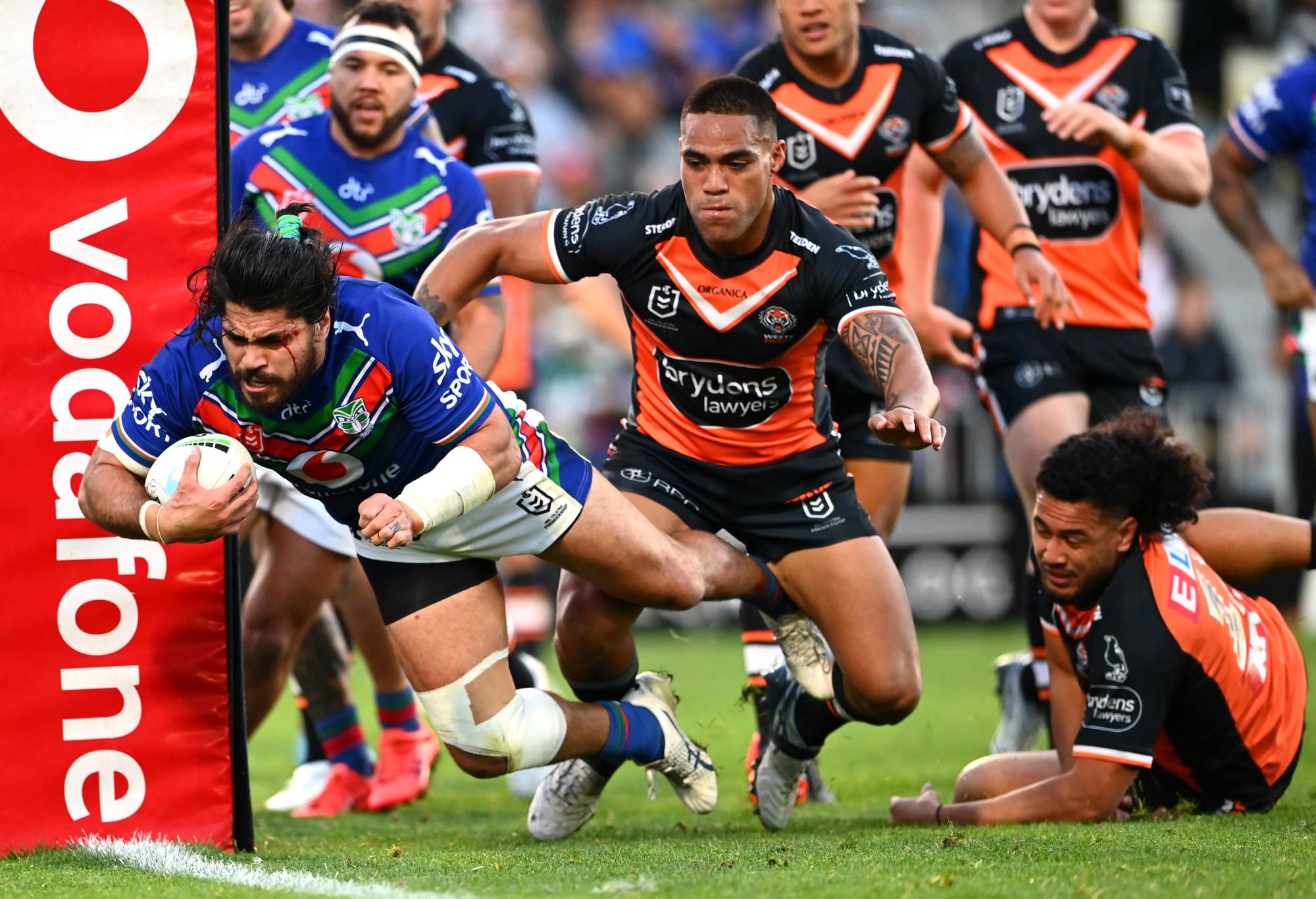 She would intervene again to take the opener off Harris-Tavita for a Marcelo Montoya knock on, but had no complaints when, eventually, emotionally, Warriors captain Harris found a gap in a knackered Tigers backline to score their first try back after 29 minutes.

It wasn’t the first score – Johnson had admitted attacking defeat earlier by taking a penalty goal – but as far as appropriate people to resume rugby league points in New Zealand go, it’s hard to look past legends like Harris and Johnson.

Given the amount of tackling that the Tigers did in the first half, it was unsurprising they tired before the break. Johnson cashed in, with a kick aimed at Watene-Zelezniak that eventually fell for Harris-Tavita.

Wests did get on the board with a penalty goal after the siren from Adam Doueihi, but they had been a clear second best.

The second half opened with the Tigers less on the back foot, though still unable to generate any real pressure. The first 20 minutes generated a lot of hard contact but very few scoring chances, with the line broken just once on either side.

It was no surprise that, when the opportunity came, the Warriors took another two points.

The Tigers did get themselves into good ball in the final 10 minutes, but it was ponderous stuff. They played too much from sideline to sideline and when they did straighten up, the Warriors were waiting.

Luke Garner was stopped by Harris-Tavita and held up, before James Roberts was bounced into touch by Adam Pompey.

There was time for another to send the Kiwi fans home happy. Again, it was the boot of Johnson and the aerial ability of Watene-Zelezniak, who rose highest and tipped back to Jesse Arthars for a final, emotional try. 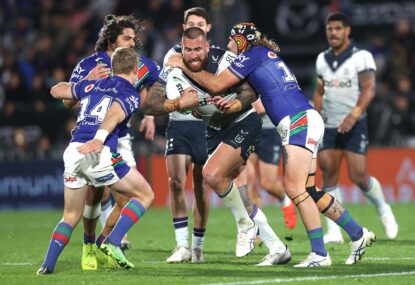