Round 19 was a pretty enjoyable slate of rugby league, but the weekend ended with the NRL world in uproar about a controversial finish decided by officials. Here come your talking points.

Would a Wests Tigers appeal overturn a result?

I’m not going to re-litigate the entire sad scenario of the Cowboys’ post-siren victory here because this is NRL talking points, not NRL full-blown investigations.

But surely the wronged Wests Tigers have already fired a protest or appeal into NRL headquarters regarding that fateful final play against North Queensland.

There’s fertile grounds to do so, with a complete sh*tshow of timekeeping errors, highly questionable allowing of a captain’s challenge, a short whistle and the decision from Ashley Klein in the bunker as well. You can’t protest the decision, but the process to get there.

For their part the NRL have said the challenge was permissible, with a spokesperson telling the Sydney Morning Herald: “The captain can challenge decisions by the referee to stop the play.

“Although the referee had blown his whistle to stop the game after the last tackle was completed as time had expired, he had not yet called full-time.

“The whole concept of the captain’s challenge is to make sure any decision by the referee that stops the game can be reviewed.

“To not do so would effectively deny a team the right to have an officiating error corrected on the last play of a game just because time had expired.”

What’s your call, folks? Does the NRL’s explanation make sense? Was it actually a penalty but we’re all up in arms because the plucky Wests Tigers were on the wrong end of it?

How will Graham Annesley spin this? Will Ashley Klein have a week or two off?

A lot of the talk around Cronulla’s rise to the top four has centred around a soft draw, but their effort running Penrith to the line showed they can lift a few levels when it’s needed.

They’ve got a few weeks without Dale Finucane after he was charged for a wild tackle which caused a head clash and took off part of Penrith centre Stephen Crichton’s ear, but other than that, their roster is in decent shape.

Coach Craig Fitzgibbon post game was aware of the intensity his team faced after they led out 10-0, with the Panthers working their way back to a 14-10 lead, then lifting their rating noticeably again during the last 15 minutes to control the ball and ultimately get the backbreaking score to Jarome Luai.

“All the stuff you’ve got to get out of a footy team to become good at the end of the year, we’ll take a lot of positives out of that but we have to also understand we need to be better and we’ll work on that and get our execution a bit better,” Fitzgibbon said.

“The guys are disappointed because we feel like we’ve got more to offer than that. There’s a lot of confidence you take out of it and confidence to get in an arm wrestle which is semi-like footy.

“So a good lesson for us in getting comfortable feeling uncomfortable for a long time there, that was pleasing for the guys to go through.”

Penrith are the masters at making their opponents uncomfortable and the Sharks held their own. They’ll now take on the rejuvenated South Sydney and will get to apply all these lessons again.

It was actually a good round of games

Obviously overshadowed by the Tigers and Cowboys debacle, but this was an enjoyable round of games. Key wins for Brisbane, the Roosters, Dragons and South Sydney sent Parramatta, Manly and Melbourne into deep introspection.

While every game bar the last was decided by a double-figure margin, the story of each game was fascinating.

Canterbury flew out of the blocks but gave the Gold Coast a sniff of a win. Canberra trailed 0-14 at halftime before overrunning New Zealand to keep their season alive. South Sydney’s win over Melbourne has them in discussions for the double chance.

Manly were somewhat unlucky to lose Jake Trbojevic, Lachlan Croker and Andrew Davey through COVID-19, but the Dragons took full advantage with their season almost on the line.

Parramatta were bludgeoned at home by the Broncos and looked bereft of solutions, while their conquerors look like they believe they are capable of anything.

Ponga failed an HIA for the third time this season after Roosters prop Matt Lodge clocked him on the jaw with a forearm five minutes into their Friday night game. 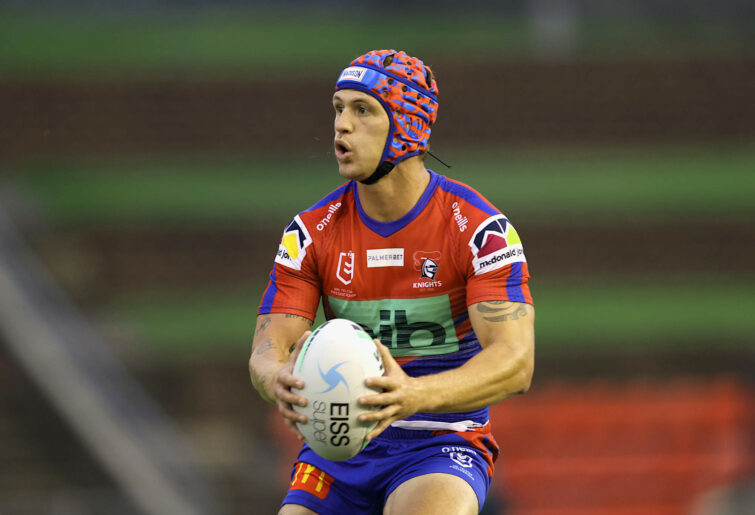 It was the fifth time the star Knights fullback has left the field for a head knock and reports have him being shut down for the remainder of the season.

For as long as it feels Ponga’s been around, he’s only 24 years old, ironically the same age as cricketer Will Pucovski who has had his own battles with concussion.

The only move for 2022 is to give him the rest of the year off and work with the specialists to see what the next steps are. The Knights are done and it would be madness to put their best asset at risk for no reason.

Until we find out what the go is I’ll bring this up – the middle of the ground is fine, everywhere else is very dimly lit. Maybe the shape of the stadium is the issue?

– Again, how about them Bulldogs? A ripper of a win against the Gold Coast. Josh Addo-Carr set free to score tries. The ball is in constant motion. Great young players coming through to complement the ‘star’ signings.

– For the second week in a row, Melbourne’s Nelson Asofa-Solomona was charged with a grade 1 dangerous tackle… and fined. He was also fined for a charge of grade 1 dangerous contact. So two charges from the one game on the same opponent (Cam Murray), with no suspension.

– Manly will wear a pride jersey this coming Thursday, long overdue in the NRL and surely the first of many more.

– Congratulations Tigers prop James Tamou for 300 games, a mighty effort and in the front row too.

– Shame on those cowardly Parramatta fans who booed Jakob Arthur, a 19-year-old who has become a scapegoat for the Eels’ mixed performances.

– With injuries tearing their backline apart the Storm are reportedly sniffing around for loan replacements from clubs out of contention, with Reece Walsh and Josh Addo-Carr inquired about. Why not? If you don’t ask, you don’t get… Which players from lower ranked teams will get a shot at a title?

Round 20 is another interesting set of games that’ll influence the final standings.

On Thursday, Manly play the Roosters, the winner of which will have a great claim on the eight. On Friday, Melbourne travel to New Zealand desperate for a win and Parramatta host Penrith desperate to stay in the upper parts of the eight.

Saturday has three great matchups – Canberra head to the Gold Coast with zero margin for error if they want finals, Cronulla and the Bunnies play off in a top-four-shaping clash and Brisbane host an angry Wests Tigers.

The round finishes with the beleaguered Newcastle welcoming the flying Canterbury, then St George Illawarra play the Cowboys in a game that’s must-win for both.

What did you take from this round of games, Roarers?