The vilification of Jack Ginnivan

The media’s vilification of Jack Ginnivan, leading to the AFL’s scapegoating of him, has been shameful.

But both organisations are great at this: the media at determining a narrative, and the AFL at kneejerk responses that are stopgap attempts to quiet the uproar, rather than legitimately explore whether an issue exists, and then find a resolution.

Joel Selwood has repeatedly drawn head-high contact over a glorious three-hundred-plus-game career but has never drawn the media’s ire.

Did we ever hear Hudson – who has a sideline hosting Geelong functions – target Selwood? Nope. But Ginnivan, a second-year player who came into 2022 with five games under his belt, was immediately posed as a problem to be solved.

Why? Is it because Ginnivan is seen as a troublemaker?

When an opponent pushed Ginnivan to the ground during a lull in Collingwood’s clash against North Melbourne, David King was indignant, questioning why Ginnivan deserved to be treated like that.

Cameron Mooney on the boundary scoffed incredulously and asked King if he was kidding. King backtracked. Okay. So we’re victim-blaming now, are we? Good one, Cam and David. 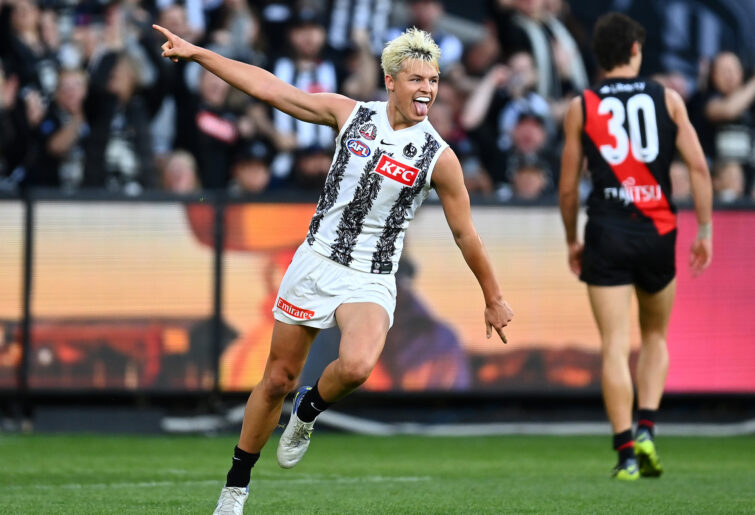 Make no mistake: this is the subtext – Ginnivan deserves whatever comes his way. And if a line’s been drawn, it’s the one Ginnivan, rather than his opposition, have crossed, and thus he must be punished.

On FOOTY CLASSIFIED, Ross Lyon made the point that opposition are actually tackling him with closed fists.

Treatment has gotten so ridiculous that even former critics, such as Kane Cornes, have openly queried the lack of protection Ginnivan is receiving.

Cornes joked that Ginnivan could be “decapitated” and he still wouldn’t draw a free. Wayne Carey remarked that opposition attack Ginnivan with carte blanche because they know they won’t be penalised.

Nothing defines what a farce this has become more than an incident in the first quarter of Collingwood’s clash against Essendon.

Mason Cox gathers the ball, is tackled, and handballs it off to a passing Ginnivan. Let’s give Mason Redman the benefit of the doubt that it’s just a clumsy high tackle, rather than a willful malevolent act.

Still, it’s a free kick – everybody remarks on it.


In the same motion as the tackle, Redman now slings Ginnivan (in a headlock) to the ground. Even legitimate tackles that are held too long are penalised for “holding the man”.

While both players are lying on the ground, Redman then makes a separate motion to dangerously twist Ginnivan’s head.

I’m unsure what’s the bigger issue here: that the umpires lack the integrity and character to buck their programming and rightfully determine that Ginnivan has been wronged here – not just once, but three times, with the third indiscretion borderline reportable. 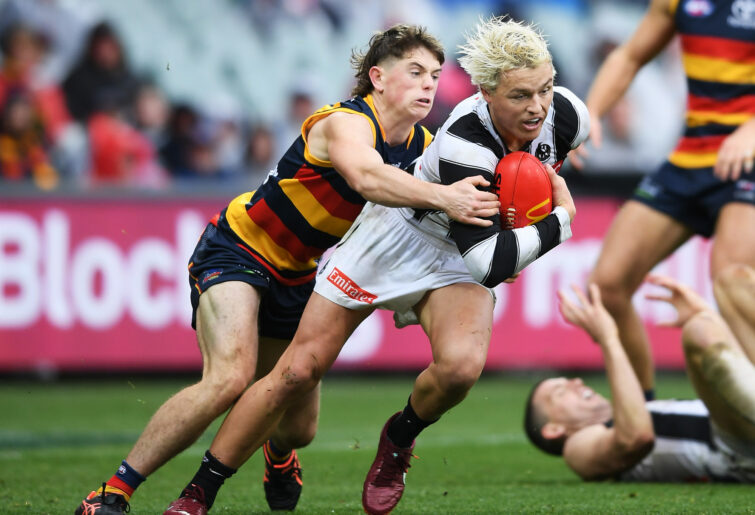 Or that the AFL will either offer their token disapproval and yet nothing will change, or they’ll tick it off as fine because they simply don’t want to admit they’ve gotten it so far wrong that they’ve enflamed the situation.

The AFL are big on “duty of care”. The head is meant to be sacrosanct. We keep hearing this.

Last week, we saw Melbourne’s Kysaiah Pickett draw a high free and it was fine. We saw commentators laud Fremantle’s Michael Walters for his “skill” in drawing a high free.

But duty of care only exists selectively, it seems.

Jack Ginnivan’s character is irrelevant – he can be mischievous, he can be disrespectful (as he was deemed earlier in the season), he can be an outright villain, but once he’s on that football field, he and every other player are meant to be equal.

Should he be injured during play because umpires failed to protect him, it’d be interesting to see if he could pursue an OHNS claim because the AFL are creating an unsafe workplace.

To the media who’ve pushed this barrow and championed this cause, are you proud? Why did you choose now to plant this flag? You’re sacrificing a 19-year-old kid, and for what? Out of bias? For clicks? Because you have nothing of genuine value to say?

Because it certainly isn’t what’s right.