St Kilda take on Hawthorn in a twilight match on Saturday at Marvel Stadium, in their most important match of the season yet.

The Saints currently sit 9th on the ladder with only percentage separating them from the eighth-placed Western Bulldogs.

They’ve won 10 of their 18 games this season and will have to win at least two, possibly three of their final four matches to secure a finals berth.

The Saints will be without Jade Gresham who has unfortunately suffered a season-ending knee injury and Jack Billings who is out with a back complaint. Ryan Byrnes is also out for the Saints.

Coach Brett Ratten said he is not expecting the world from the three-time All Australian.

“I think if you’re at the ground as a supporter, you’ll probably hear him; that’s the influence he has. We don’t expect Dan to have 35 (disposals).

“We just expect him to do his role and play his part. But what he will bring I know is the direction, leadership, voice and he gives confidence with that when he does that to a teammate. That’s what we’ll get out of Dan,” Ratten said.

Former Hawk Bradley Hill seems to play his best footy against his old teammates. He is ranked first for disposals against Hawthorn among today’s Saints’ 22.

Meanwhile the Hawks have brought back exciting young running machine Changkuoth Jiath, plus Sam Butler and Jacob Koschitzke for the clash.

Running machine Jarman Impey has been managed, ruckman Ned Reeves is out with a foot injury while young defender Denver Grainger-Barras has been omitted.

Sam Mitchell’s men play on 32 per cent of the time from marks inside their defensive 50, which is ranked first in the competition. This will be crucial in the game against the Saints because they are an intercepting side who like to punish the opposition from turnovers.

With CJ back in the side, Sam Mitchell and co may seek to use that pace to exploit the opposition once again. 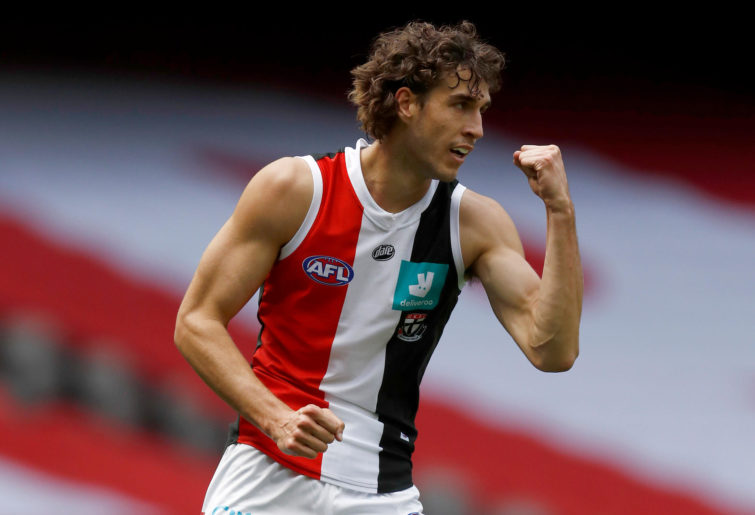 Coming off three consecutive wins, the Hawks will be seeking to continue that winning form. They beat Adelaide by 3 points, the West Coast Eagles by 25 and then defeated North Melbourne convincingly by 46 points in Launceston last week.

The young improving Hawks have demonstrated that they can match it with some of the best in the competition.

Father-son recruit Finn Maginness has done an amazing job tagging this year. He has been set the task of quelling the influence of some of the games’ most elite players and he has flourished.

He has completed four hard tagging roles with excellent results. Against the reigning premier Melbourne, Maginness was sent to Ed Langdon and kept the star Demon to only nine possessions for the game. Then he was sent to Adelaide’s Jordan Dawson and kept him quiet.

Mitchell then assigned the 21-year old the task of tagging West Coast’s gun Tim Kelly; and once again the boy who was recruited under the father-son rule kept his opponent out of the game.

Not only is his defensive work exceptional, he is gathering the ball himself and contributing to the team score, even hitting the soreboard at times.

Last week against North Melbourne, Maginness was sent to Jy Simpkin . After being arguably North’s best player the week before against Richmond, he kept the Roo to only 14 disposals

Will Sam Mitchell and his assistants send him to Jack Steele this week or is it another one of the Saints’ stars that he is set to keep under control?

St Kilda have beaten the Hawks the last four times they’ve played with an average winning margin of 39 points.

But this could be the time for the Hawks to turn it around.

The last time the two teams met was in round four. The Saints won with a 69-point margin, the Hawks’ worst loss for the year.

The other question Mitchell will ponder is will James Blanck or James Sicily be sent to nullify the impact of star forward Max King; or will reliable dashing defender Blake Hardwick get the gig and look to run him off his legs?

The Saints are great at scoring from clearances so this is another area the Hawks will need to ensure they remain competitive in.

The Saints will be playing to keep their finals chances alive. It will be a good test for the young Hawks. Mitchell has used that as inspiration saying he’s been in that position in the past where the Hawks couldn’t make finals but have had an impact on the fate of other teams.

Will the Hawks be able to get redemption for their loss in round four or will the Saints be able to keep their finals chances alive?