Broncos star Patrick Carrigan is facing the prospect of missing the rest of the regular season through suspension after being referred straight to the NRL judiciary for his “horrendous” hip-drop tackle on Jackson Hastings in Saturday night’s upset loss to the Wests Tigers.

The Tigers lock limped off and was on crutches on the sidelines after the game with fears he has suffered a syndesmosis injury and will not play again this year.

Interim coach Brett Kimmorley was fuming over the incident.

“I thought the tackle was a pretty ordinary tackle,” Kimmorley said. “It is something that has crept into the game a little bit and it needs to be looked after because it’s a horrendous tackle and the outcome can be really bad.”

Broncos coach Kevin Walters denied Carrigan’s tackle was intentional and was one of those things that happen “in the heat of the battle”.

Rabbitohs prop Tom Burgess is looking at a ban of 1-2 matches for his high tackle in extra time against Cronulla which led to him being sent off while Raiders prop Joseph Tapine can accept a $1000 fine for contrary conduct in the only other charge from Saturday’s matches.

On the match itself, Kimmorley said it “wasn’t a fluke” that his Wests Tigers put a huge dent in Brisbane’s top-four hopes with an 32-18 upset at Suncorp Stadium on Saturday night.

The Broncos have surrendered fourth spot to the Storm, who beat the Warriors 24 hours earlier, when they put in a flat performance against a team that was running last.

And the good news for the Tigers is they have lifted themselves away from last spot with their boilover victory, assigning Gold Coast to wooden spoon favouritism after they went down to Canberra earlier in the day.

Maybe it was karma for Wests after they were denied a legitimate win the previous week when a bunker blunder ruined their hopes up securing a precious two competition points against the Cowboys in Townsville.

“With the hard work the players have put in for a number of weeks, this has been coming,” said interim coach Brett Kimmorley.

“I’d like to think this wasn’t a fluke what we achieved tonight. The journey the team went on after Sunday night when things went against us and had all reason to fall into a heap now, I’m proud of these boys as a coach.”

Walters admitted his side were second best.

“In the critical moments the Tigers were just better than us,” he said. “You don’t have to be too far off (your game) at this level to lose.

“I think the Tigers’ football of late has been very good, and I don’t think they should be sitting where they are on the table.”

Tigers winger Brent Naden opened the scoring in the 12th minute to give the visitors a 6-0 lead. Tesi Niu leveled the scores midway through the first half when he chimed into the back line down the right edge.

Five-eighth Ezra Mam made it 12-6 when he twisted his way over the line and Naden should have hit back seven minutes from halftime but ran out and fumbled a pass with the left corner just a few metres away.

Wests ended up equalising just before the break when Kelma Tuilagi broke free and turned the ball inside for a juggling Jock Madden to touch down after being called into the side for Luke Brooks, who is out for the rest of the year with a calf complaint.

They went 18-12 up six minutes after the restart when Adam Doueihi batted back a bomb and centre Starford To’a plunged over out wide.

The Tigers made it 24-12 when bench prop Zane Musgrove crashed over for just the third try of his career. 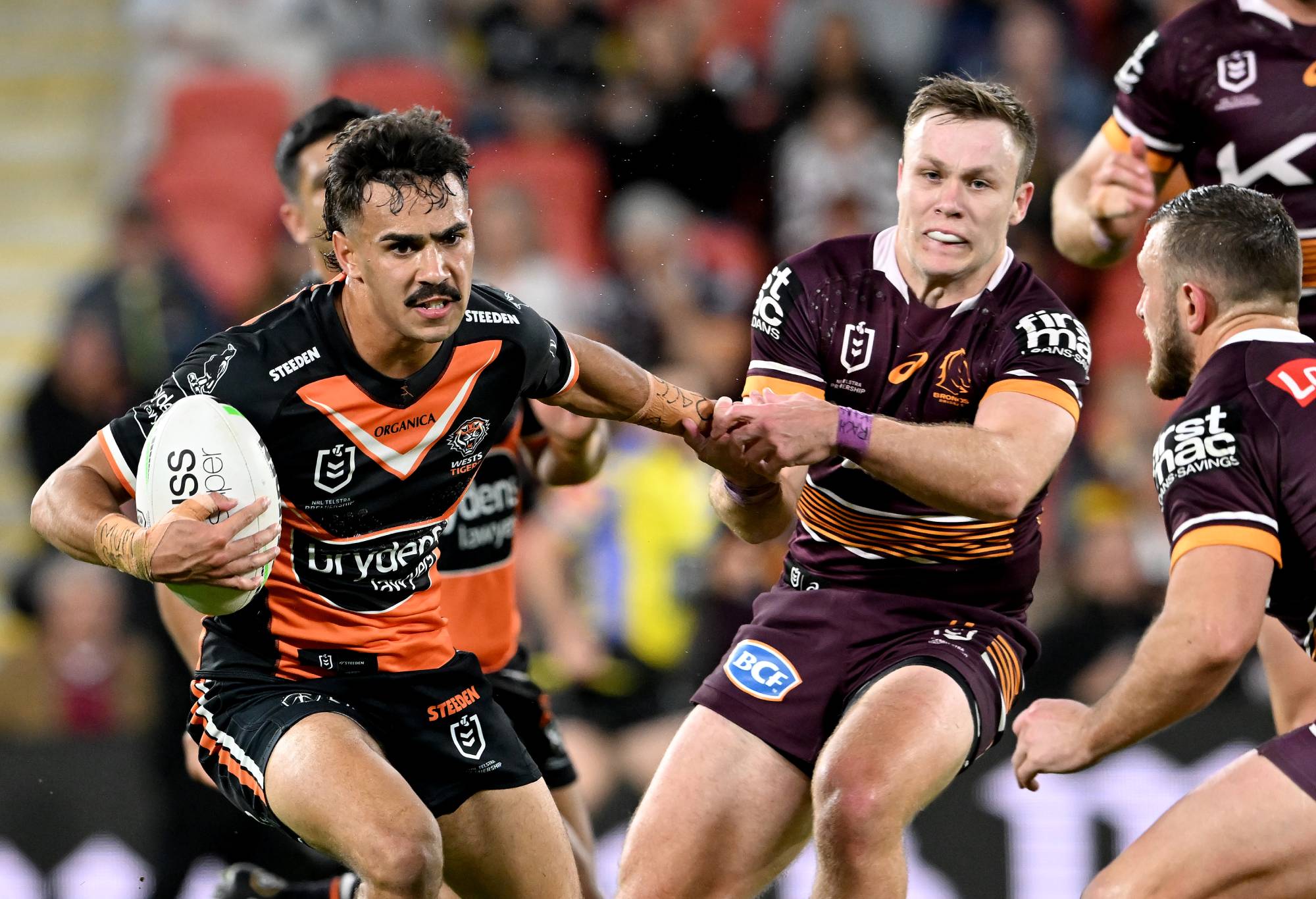 Brisbane fought their way back into the contest midway through the second period when Jordan Riki muscled his way over the stripe to halve the deficit.

Just when it looked like the Broncos were going to level it up heading down the stretch, the Tigers extended their lead to eight when Carrigan was penalised for the hip drop tackle on Hastings.

The lock limped off and was in crutches on the sidelines before the full-time siren sounded.

Doueihi slipped through some threadbare defence to seal just their fourth triumph from 19 starts this season and the first since interim coach Brett Kimmorley took over from Michael Maguire last month.