The ‘bring back the biff’ crowd, Channel Nine commentators, and other dinosaurs will all be having an extra sniff of Dencorub with their cornflakes this morning, after two players were given their marching orders in Round 20.

Nathan Cleary had no complaints when he was marched for attempting to turn Dylan Brown into a bollard, while Tom Burgess may consider himself a little unlucky to be sent for his lazy high-shot on Ronaldo Mulitalo, although sending off anyone named Burgess has merit.

In these technologically enlightened times, foul play is more likely to be dealt with well after the game via the match review system, unless you’re a Kiwi thug with a hyphenated surname, but surely there’s no greater sight in rugby league than the referee single out the recalcitrant player, point to the sideline, and say the words we are dying to hear: “You’re off!”

That’s what the crowd have paid their money to see.

Biff enthusiasts will note that last week was the first double send-off round since Round 22 last year and only the 12th time in the NRL era that two or more players had been marched in the same round.

Probably the best single-round effort was Round 1 of 1999 in the Roosters vs Warriors clash, when referee Matt Hewitt marched both Brad Fittler and Ali Lauiti’iti, and put another couple of players in the bin after an all-in brawl.

Inexplicably, Hewitt disappeared from the refereeing ranks within 12 months.

It was with some disappointment that we then had to wait until 2021 for the next treble, when the fleeting crackdown on foul play saw Herman Ese’ese, Tyrell Fuimaono and Josh Papali’I all sent packing in Round 10 for high tackles. 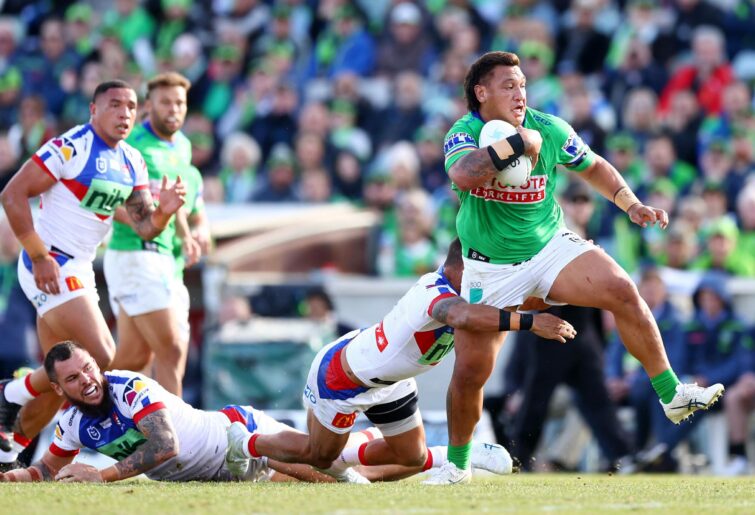 With five full rounds to go in 2022, knuckle enthusiasts will be hoping that a few more gladiators step up to the plate and earn their marching orders. If they do, 2022 could go down as the second-highest year for send offs in the NRL era.

The eight dismissals so far this year already equals both the 1999 and 2000 efforts, but is sadly a long way short of the glorious 1998 high watermark, when a total of 17 players were punted. Now those were the days, and what a way to get the NRL era off to a flying start.

Yes, ’98 was a year to remember, from Round 1 when Geoff Toovey and John Hopoate from Manly were both marched by referee Bill Harrigan for “contrary conduct/dissent”. Illawarra’s Shaun Timmins was sent off twice within three games for careless tackles, and St George’s Lance Thompson managed the rare feat of being sent off in consecutive weeks for high tackles.

It hasn’t all been fun and early showers though, as you’ll be horrified to learn that in 2014, 2016 and 2017 not a single player did anything to deserve dismissal. Incredible!

That means that in those 11 years, and over 2250 games, the paying public only got to see 12 players sent off. A big disappointment for rugby league’s true believers, but a testament to either the impeccable on-field behaviour of the players, or poor refereeing.

• Cronulla are the team with the most players sent off, with nine, closely followed by the Warriors, Roosters, Manly and St George-Illawarra with eight.

• Of the teams still in existence, South Sydney are the best behaved, with only two players marched.

• Referee Paul Simpkins is the people’s champion when it comes to send-offs with 11 victims, just shading Sean Hampstead’s ten. Unfortunately both of these legends have now hung up their whistles.

• My two favourite send-off offences were tripping, by Matthew Ridge in 1999, and Kevin Proctor’s biting charge in 2020. Way to go boys!

• Of the 59 send offs so far, six resulted in a not-guilty verdict, two had the charges withdrawn, two resulted in a fine and no suspension, five saw no charges laid, and ten more did not result in suspension.

Last week’s send-offs will bring the crowds rushing back, so let’s hope referees have the courage to punt players when necessary.