'It's not his go': Good bloke or not, judiciary must judge every case on its merits

If I hear one more rugby league commentator say, “I don’t think he meant to do that” or “he’s not that type of player” I think I’m going to scream.

When it comes to NRL ‘clean skins’ (that in itself is a terrible term) getting penalised or suspended, some out in the public eye have fallen into a bad habit of trying to connect the type of person the player is with the punishment.

Believing that because the player is someone who doesn’t usually get into trouble or due to the fact they are one of the bigger names of the game, that those traits should reflect the sentence.

I have news for those people, and it’s all bad.

It shouldn’t matter if the player is a nice guy, a superstar, bought his parents a house, or has good table manners – if you do something wrong you should be correctly punished for it. But there are still some that believe the perpetrator should be judged on who he is rather than what he did.

There has obviously been a lot of talk this week regarding Penrith’s Nathan Cleary. The Panthers halfback was marched during his side’s loss against the Eels last week for his horrible spear tackle on Dylan Brown.

Thankfully for everyone Brown got up and walked away after the incident, and Cleary took the early guilty plea of a five-week suspension.

Many believed that the send-off was correct, and the length of the ban was spot on. But there were others that expressed how out of character the tackle was for him, and that it should have been a much lesser sentence because of who it was.

It started the moment the referee pointed to the sheds. 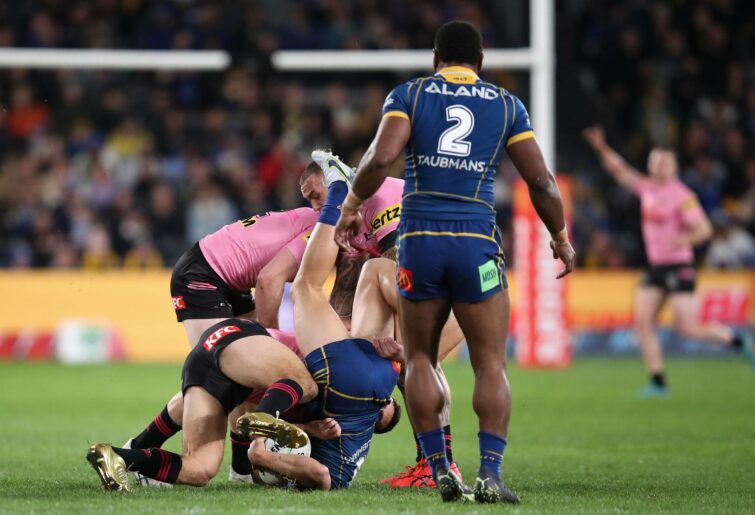 One journalist agreed with the marching orders but had to tweet about the kind of person Cleary is as well as his assumed intention on the tackle as well.

“Great player, clean player, unintentional … but Cleary had to go.”

Just say “right call, Cleary had to go.” It has nothing to do with his status in the game.

After Cleary’s time on the sideline was confirmed, the arguments began flowing for why players of his calibre shouldn’t receive those kinds of penalties.

Channel Nine commentator Billy Slater asked on his Billy’s Breakdown segment “Do we need to be wiping our best players out of the competition for a quarter of the season for one mistake that they make?”

Um, yes. Yes we do. If they do something that warrants missing a quarter of the season, then absolutely.

Phil Gould also jumped onto the Cleary Defence Train. “I don’t think we need good players out of the game for six weeks to remind them that that’s not what you do,” he explained on 100% Footy on Monday night.

“That’s just an error of judgement. I know this Penrith tackling technique very well, he’s probably thinking his other two players would support that player a little better than they did. They pulled away from it and he found himself in an awkward position.

“Does Nathan Cleary need six weeks away from the game to learn his lesson that that’s the wrong tackle to make? He knew it six seconds after he did it that it was wrong.

That’s wonderful, I’m glad he realised the error of his ways so quickly. Hopefully that – along with his correctly awarded five-week suspension – help ensure that he doesn’t do it again.

Dragons forward Aaron Woods was criticised for his comments on Cleary being given preferential treatment when he said on Triple M during the week that being “a good bloke” doesn’t equate with getting a lesser charge.

“Just because he comes out on Instagram and says ‘Oh, I’m sorry, it was totally out of character’, that’s what happens on a rugby league field. Things can go one way or another. I just think everybody should be treated the same way. I’m not having a go at Nathan Cleary, I’m just saying, just because he’s a good bloke doesn’t mean he should be getting off with a lesser charge.”

Now, before the Penrith faithful come at me for having a go at their King, I promise you I’m not. Cleary knew what he did was wrong, didn’t argue with the referee, apologised in private and on social media and then accepted his ban gracefully.

My gripe is with the narrative that gets immediately injected into the world that the penalty should reflect the players personality type or playing ability as opposed to what the offence was.

Rugby league players make mistakes on the field. They happen every game. We actually count them and compile them into spreadsheets and use them as statistics.

The type of mistake has its own repercussion – a set restart, a hand over, a scrum, a penalty, time in the sheds or a stint on the sideline. It shouldn’t matter who does what; the action and the action alone is all that is needed to marry up to the corresponding consequence.

We need to stop bringing intent, the apparent personality type or talent of the player into the conversation when it comes to penalties and punishments.

Put it this way, players don’t set out to knock on during a game, but they do. Could you imagine if the referee gave them the ball back and said, “it’s ok, have another go, you obviously didn’t mean to do that, and you seem like a really nice guy”?

Danielle Smith
Editor
Writing about Rugby League – that’s been the dream all along. I’m also the Minister for War and Finance at home. Known for my sarcasm and my potato bake. Follow me on Twitter - @LadyLeagueNRL
close